The harsh working environment of Amazon warehouseIt became clear,Jumping off and suicide at Amazon's headquartersThere are times when the Amazon workplace environment has been repeated many timesCriticism and praiseI got on and off. About such Amazon, CEO Jeff Bezos said "I do not say "Amazon's way of doing it right", but it is a culture rooted in 20 years"Although I commented, Bloomberg newly posted a column" How did Amazon become a nightmare for American companies "?

Amazon is the most astounding in the world, a terrible enterprise that continually expands unreasonably. Today, while selling soap, he creates TV programs and so onSell ​​computing power, Even Christmas Eve delivers what the user wants to the door.

In 2018It is ranked as the most valued company on the planetAlthough it is Amazon, annual profit is less than Southwest Airlines, and it is about 426th in the world. However, Amazon's Jeff BezosThe wealthiest person in the worldis. Amazon is an EC site that was born on the Internet, but now it has its own warehouse and grocery store and possesses 90 real estate in terms of Empire State Building.

Amazon has been increasing its influence year by year. Bezos seems that Amazon wants to establish a firm position in every industry,Selling PPV of mixed fighting sports UFCOrOpen real dealerHowever, expansion of the business does not know where to stay. Bezos also said that "Use wealth built at Amazon to realize the space travel business"It is clear that we are interested in the space travel business as well.

Bloomberg said, "Amazon executives in the US big corporate executives say that in the phone with investors thousands The times also refer to Amazon, the number of times is more than "President of Trump" or "Tax", which expresses the magnitude of Amazon's influence. It seems that the word "Amazon" is beginning to be used as a verb indicating "to harm other companies" as Google of the search engine is now used as a verb "to search" . In fact, in some cases the term "be Amazoned" is used in the sense that "your business may be useless due to the entry of other companies". Even such Amazon made a big mistake as if everything done in 2014 was a mistake. In 2014, Amazon developed its own smart phone "Fire PhoneWe will release it. It was a terminal that appeared with great expectation, at the beginning of the releaseReports that impress high performance appear one after anotherI did it, but in the end I was impressed with the failure work "Sales discontinuation. Amazon has recorded a large deficit due to sluggish sales of Fire Phone. The revenue growth in the holiday season in 2014 is the second worst since 2001 and this was also the death to be blamed on the Fire Phone.

Such a Fire Phone has also been reviewed by GIGAZINE. You can check what kind of terminal it was in the following article. 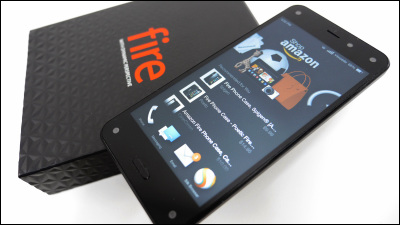 Amazon's stock price will be reduced by 20% due to the blame in 2014, but after a year the market value will be expanded to 5 times. 2015 was also the year of Amazon Web Services (AWS) leap forward. Since launching the AWS service in 2006, Amazon is always leading the market in cloud computing services, and AWS is being used not only by young companies and startups just born but also by large companies such as Netflix And evolve. It seems that AWS's operating profit in 2015 accounted for two-thirds of Amazon's overall operating profit. The composition that Amazon is supported by AWS continues even in 2018 at the time of article creation. 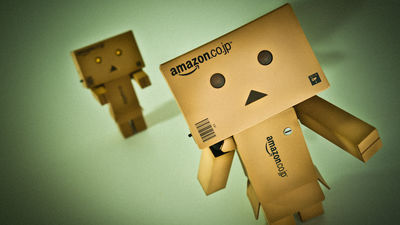 2015 is a large sale Amazon makes for paid members "Prime DayIt is also the first year that we held the event. In the prime day of 2017, AmazonRecord sales of more than 200 billion yenAnd Bloomberg wrote that "Amazon found a way to make customers buy more things."

In December 2014 the service which the purchased item arrives in one hour "Prime NowStarted. About one year later in November 2015Prime Now service starts in JapanAnd since 2016 the service area is outside of TokyoExpansion to Osaka · Hyogo · YokohamaIt has been.

In addition, 109 distribution warehouses that had possession in 2015 increased to 150 by 2018. Furthermore, a smart speaker with speech recognition AI "Amazon EchoWe are in the same field with Apple and Google in the field. Also, in 2017, you will find a wholesale supermarket Whole FoodsAcquired at 1.5 trillion yendoing.

I understand well that Amazon aims to acquire Whole Foods by reading the following article.

What is the effort to build the Amazon empire seen in the acquisition of Amazon's 1 trillion yen Whole Foods? - GIGAZINE 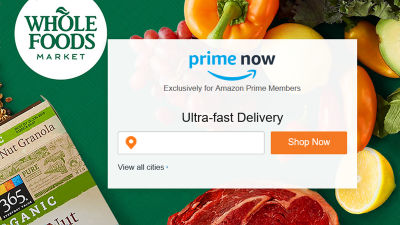 A terrible thing for many companies is that Amazon has room for growth even in the retail business. More than 90% of sales in the retail business is occurring on the physical store in the United States. Although the proportion of online shopping has increased, Amazon has a real store of Whole Foods that I bought, and in additionAmazon GoYaAmazon booksWe also have real stores such as.

As it was difficult for Amazon to acquire Whole Foods, it is very difficult to predict which industry the Amazon will enter next. On February 27, 2018, the smart home appliance "RingAlthough I just bought it, on March 12, 2018 "Plan a credit card for small business"As a result, American Express stock prices fell by about 1.4%.

Such Amazon is not invincible, either. In North America, the profit margin in e-commerce is only 2.7%, not a lot of people can produce as much profit as you imagine. However, it is clear that for now it is a handful that has the power to contain Amazon and Bezos CEO's aim.