Wacom's liquid crystal pen tablet series "Wacom Cintiq ProAlthough compact terminals of 13.3 type and 15.6 type had been released so far, 24 types of "new type" which can sketch and draw on a larger screenWacom Cintiq Pro 24"Has appeared.

You can see what kind of liquid crystal pen tablet Wacom Cintiq Pro 24 is by looking at the following movie. The built-in stand is set up as follows and can be inclined 20 degrees. Includes Wacom Pro Pen 2 to sense inclination. With pen pressure of 8192 level it is a battery-less battery-less stylus pen. With the strongest stylus pen in the history of Wacom, it realizes a feeling like drawing on paper. The display glass is a spacious one of flat glass finish is adopted. You can set up shortcuts on ExpressKey Remote or on-screen controls on the side of the display to make your work more efficient. In addition, Wacom Cintiq Pro 24 "Wacom Ergo Stand" which is perfect for people who want to finely adjust the height and inclination angle will also appear. It is also possible to arrange the liquid crystal pen tablet vertically, and this is scheduled to be on sale from May 2018. In addition, "Wacom Pro Pen 3D" which can operate 3D / 2D software more conveniently is also available. This stylus pen is newly added with one side switch, it is three, and it is used frequently when 3D application such as "pan / zoom" "tumble (object rotation)" if 3D application corresponding to Wacom Pro Pen 3D Since the function is set from the beginning, software operation becomes easier. A review movie actually used by the Square Enix artist is released to the Wacom Cintiq Pro 32, so you can listen to the actual creator's "live voice".


Existing Wacom Cintiq Pro series "Wacom Cintiq Pro 13" and "Wacom Cintiq Pro 16" have already been reviewed with GIGAZINE. Please have a look at those who are worried about what kind of liquid crystal pen tablet it is supposed to be because you are telling a frank opinion by having detailed setup method and actual use by the illustrator of a gut. 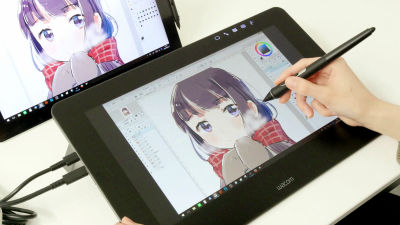 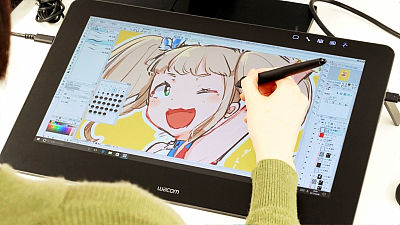