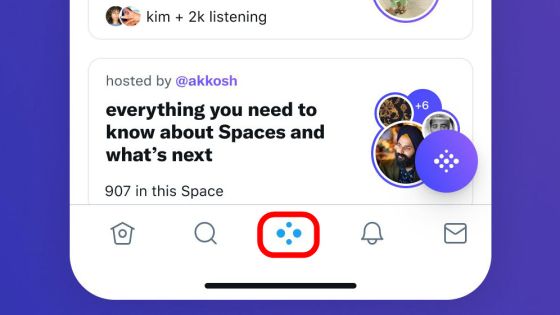 new feature alert ???? we want to make it as simple as possible to join the best, most relevant audio conversations every time you open Twitter. Starting today, we will be testing a new way to find Spaces ––we're adding a tab! pic.twitter.com/BJ5WoJB6wE

Space is a voice conversation function provided by Twitter, which will be available in the iOS and Android versions of the Twitter app from April 2021, and from May 2021, the function to join the space from a web browser has also been added. .. At the start of the space offering, to join the space from the smartphone app, you had to tap the 'participable space' icon displayed with

the fleet list at the top of the screen. However, in March 2021, it became clear that the Twitter development team was considering adding a space-only button at the bottom of the app, and expectations were high for adding Twitter features.

Twitter is working on a dedicated page / tab for @TwitterSpaces pic.twitter.com/ggXgYU6RAf

Then, on June 4, 2021 (Friday), Japan time, it was announced by the official Space account that a space-only tab will be provided as a trial for the iOS version Twitter app. If you check the image posted by the official Space account, you can see that a new icon has been added at the bottom of the screen. In addition, a list of available spaces is displayed on the screen along with 'Space host user', 'Space name', 'Number of viewers', and 'Participant icon'.

The official Space account has also announced that it has added the ability to 'wrap the icon of the host user holding the space in a purple ring' to the iOS and Android versions of the Twitter app. With the addition of this feature, it will be easier to identify who is holding the space and you will be able to join the space by tapping the icon.

our goal is to get folks to the right Spaces of interest in any environment.

now on iOS & Android, you will be able to join a Host's live space (or any Speakers on the mic) from their profile by tapping the purple ring. Pic.twitter.com/KS4H9IAe3W

Social Media Today , an SNS-related news site, pointed out that the addition of a button at the bottom of the screen of the Twitter app was the first time since the 'moment ' function appeared in 2015, 'Twitter is a space tab. The fact that we added a button shows that Twitter has great expectations for space. '

The space tabs and buttons announced this time will be available for trial on June 4, 2021 (Friday) to some users who use the iOS version of the Twitter app. Twitter also wants to share issues and improvements.

we know it's been tricky to find Spaces --the tab comes from discussions with many of you. Thank you for the feedback. We're excited to keep this special energy with our community going. We're listening and learning as we build together ????????