Starting with iOS 14, Apple will change its privacy policy for the 'IDFA ' ad identifier required to serve targeted ads so that apps cannot collect IDFAs without the user's permission. Prior to this, in December 2020, we announced that we would allow users to check the information gathering of the app, but Facebook, the world's largest social media, is strongly opposed to Apple. 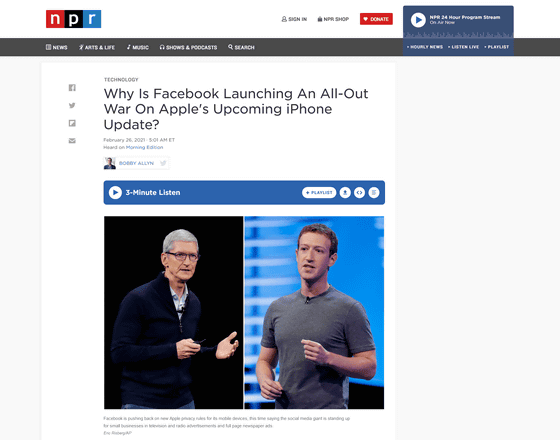 Facebook is one of the companies that has been heavily influenced by Apple's move. In fact, a spec change made in December 2020 turns out that the Facebook app is collecting a fairly wide range of information on the iPhone. Facebook, known as the world's largest advertising company, has vehemently opposed Apple's stance. However, Apple CEO Tim Cook responded to Facebook's claim on Twitter: 'We believe that users should be able to choose what data they collect about themselves and how they use it.' 'Ad tracking We just left the choice of whether or not to do it to the user, and that doesn't mean that user tracking is completely impossible. ' 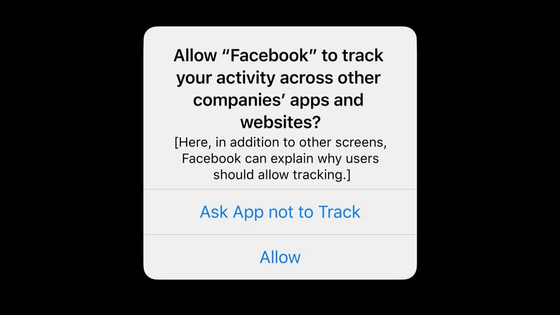 In January 2021, CEO Cook also commented on the need for finer control over data privacy: 'Privacy in our lives, from protecting health and financial data to addressing algorithms that spill false information. It's time to emphasize the important role that security plays. We need transparency and reform. '

#DataPrivacyDay comes at a time of great challenge, underscoring the critical role privacy and security play in our lives—from safeguarding your health & financial data to guarding against algorithms that perpetuate rampant misinformation. We need transparency and reform.

'Apple's attempt undermines the business model of Facebook and other free apps that consist of advertising,' said Steve Sutterfield, director of privacy and public policy at Facebook. 'Apple really has a negative impact on the Internet.' It will pay for various Internet experiences and benefit Apple, 'he said, arguing that Apple's purpose is merely self-interest.

NPR points out that Facebook and Apple are at odds because they make money in the exact opposite way.

Facebook CEO Mark Zuckerberg has long argued that 'the only way to build a social network that connects billions of people is to use the platform freely and maintain it through advertising.' 'At Facebook, users must pay with their own data if the technology or service is free,' NPR said.


On the other hand, Apple has a hardware business such as Mac, iPhone, and iPad, and it is inevitable to take a privacy protection position because it does not have to rely on advertisements.

'There are applications like Facebook that are driven by collecting data and harnessing the value of the data, and Apple is becoming the gatekeeper of the application, at a certain level,' said Jordan Fisher, a professor of law at Drexel University. Facebook and Apple are in different positions, so they clash. '

Economic analyst Dan Ives said, 'I think Facebook is concerned that'this is just the first step for Apple'. Over the next year or two, Apple will focus on data privacy as well as advertising. But what if we put a stop to it? Apple understands that in such a regulated environment, it's better for Apple to be inflexible in privacy. '