Until the logo of 'Anyway, I want to bully Asahina-san' that conveys the cute love of 'Asahina-san' to pop music

In the manga 'Anyway, Ijimetai Asahina-san, ' whose highlight is the strange, funny, and humorous relationship between a millionaire's only daughter and her childhood friend, the first page has two frames and a frontispiece as an intro. We will send you the making of how the title logo that colors such a 'frontispiece' was finished from the idea to the completion, along with the designer's commentary. We asked Little by Little, who works on logo design and binding design, for the title logo of 'Secret Miyazono'. Aoya from Little by Little has also commented on the commentary along with the making.

First of all, I told them the content and requests of the work and asked them to make three rough drafts. In the request when creating the rough, 'The title feels hard depending on how you read it, so I just want you to pop it so that you can understand the color of the work.' aoya 'I made it with a pop image as a whole about rough. The color is mainly Asahina's hair color.'

Rough A plan is a request that 'I want you to create one plan with characters placed'. The appearance of the logo alone is very good, but when I put it on the manga page, it got messed up with the character of the main story, so this plan was not adopted.

Rough B has a simple structure, but the color distribution, character edging, the English title in the middle and the hearts on both sides match the manga page with a smart and pop feeling overall, so I decided to use it as a base. Decided to.

Although I was confused about the notation of 'Anyway' in Plan C, I received only some character colors from Plan C.

aoya 'Temporarily arranged small items and letters. We are making fine adjustments after this.'

aoya 'The characters are divided into parts to give them a distinctive character. The Chinese characters have different impressions, so the position is changed.'

aoya 'Put the color, the horizontal logo is completed for the time being'

aoya 'We will create a vertical logo from the characters of the horizontal logo. The part with the border is tentative because the orientation of the border is adjusted.'

aoya 'I fine-tuned the position and put the color of the border part.'

aoya 'Going back to the horizontal logo, I will make the edge part. This time I will simply make a line in white.'

aoya 'Create edges in the same way in portrait orientation'

aoya 'I put a shadow on it as if it floated a little above.'

aoya 'Adjust the color a little and you're done!'

The frontispiece that I actually posted looks like this.

You can read the first episode of 'Anyway, I want to bully Asahina-san' from the following.

Anyway, I want to be bullied Asahina-san Episode 1 I'm being bullied today as well 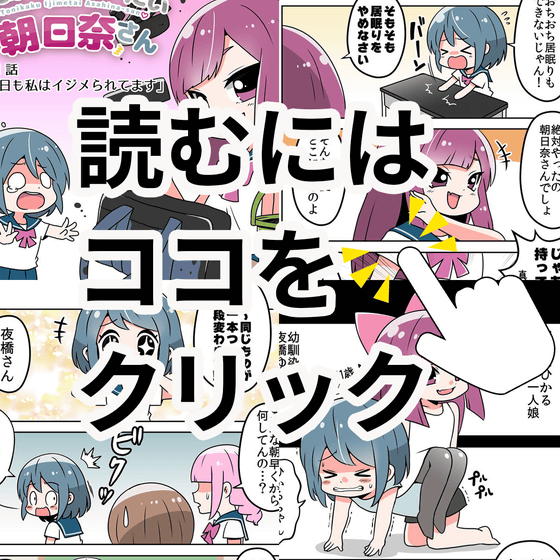