'Nyanchi mandarin' is a Basque-style cheesecake 'Nyanchi' finished with mandarin orange juice to give it a mandarin flavor. It will be sold for a limited time from April 22nd (Thursday) to May 20th (Thursday), 2021 for 237 yen including tax.

'Mofuneko Cheesecake' is a sister product of the signature product 'Nekoneko Cheesecake', and has a fluffy texture by attaching a sponge crumb around the two-layer cheese dough. The price is 1620 yen including tax, and it will be released on Thursday, April 22, 2021. 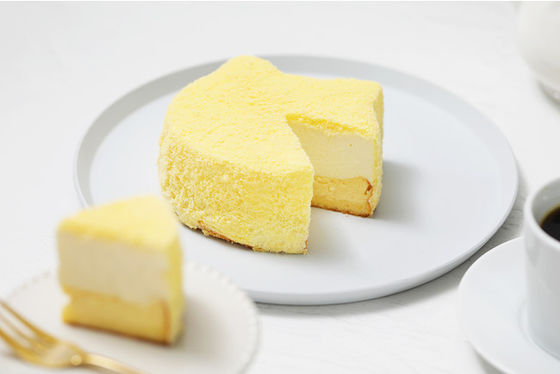 Why is 'soap' more effective than alcohol disinfectant for new coronavirus control? --GIGAZINE

Pandas that haven't copulated for about 10 years finally mate, suggesting that 'privacy may have been needed' at a zoo closed by the new coronavirus epidemic-GIGAZINE

The area of 'Ome Station', which is mistaken for 'Aomi Station', was a place where you can enjoy cats and Showa retro. --GIGAZINE

What is the identity of the leaf-like design that is common in ancient architecture? --GIGAZINE

Town 'Murray' that does not exist but has residents --GIGAZINE

If you pressure Wikipedia to delete the content of the article, it will attract attention on the contrary --GIGAZINE

When I bought a 'B' balloon at 100-yen shop, 'C' came out, and when I inflated it while thinking that I was deceived, it became B and was messed up pic.twitter.com/FqLUPyU47W

I don't think the lineup is good ... pic.twitter.com/0xqcvjG2oO

Pic.twitter.com/qITTHYdmff given by my eldest son before going to bed today

Asahi's 'raw beer mug can' announced to stop shipping due to flood of orders 2 days from pre-sale https://t.co/ErgIUjFskQ

The raw mug can is the first canned beer to be equipped with a mechanism that opens the lid fully like a canned food. A product that allows you to enjoy draft beer-like bubbles that you drink at restaurants with a mechanism that causes bubbles to spring up naturally as soon as you open them pic.twitter.com/hVAHpFgX1e

A truck that forgot to apply the side brake rushed in ...

(This is a dashcam given by the victim) pic.twitter.com/od8RvkDa5Q

It's an erratic thing at the intersection next to Yodobashi Kiba (^ _ ^;) pic.twitter.com/vp2E3iPnYN

Burger King, which I was looking forward to about once a week, was closed ... it's hard. However, I have never found such a painful closing notice, such as 'I am desperately looking for a property' or 'Who can introduce me ...'. I hope it will come back soon ... pic.twitter.com/vjJP1WYEOQ

Consideration of priority inoculation for Olympic athletes Government, twice by the end of June | Kyodo News

Breaking the window with a hammer ... Bureaucrats attempted suicide on the 8th floor of the Ministry of Health, Labor and Welfare | Bungei Online

Saturday delivery, abolished in October 'Next day' will be January next year-Japan Post: Jiji.com

21 people participated in farewell party doctors in March under the declaration of the National Institute of Infectious Diseases [New Coronavirus]: Asahi Shimbun Digital

A paint bottle that can be closed with just a push! The bottle is made of a transparent, solvent-resistant soft plastic material that allows you to put your favorite paint or liquid material such as a surfacer. Just press the lid paint bottle (small 28ml / 8 pieces) Product page has been released! Released in April 2021. https://t.co/dgd6UR7JiP pic.twitter.com/X25GykGcXB

It's an inconspicuous sticker, but it says something really good pic.twitter.com/UXpbe5gdAC

The other day, I was finally able to visit the Shikoku Aquarium, which opened last year, but the newly released 'Ai-kun Cushion' sold at the official shop is so cute that I've been hugging it every day since I returned from Shikoku. Ai is a friend of the Shikoku Aquarium mascot, Hammerhead Shark Shuko. Is it so cute that I can do something with a cushion? pic.twitter.com/n9HqCeStx4

It's the entrance season for the world. Mothers with elementary school students for the first time Please be sure to bring this coin case. A collection bag comes out of the school bag suddenly in the morning. It is said that you will suddenly prepare a chisel, sewing kit, and various things without change in the morning. More and more I was saved by this pic.twitter.com/PcjosgukW2

did you know? I can't breathe if I fall into the water with my mask on (Hidetoshi Saito) --Personal --Yahoo! News

Report on the change of the OP theme song for the TV anime 'The World Ends With You' https://t.co/05V8vtVNXO

— The World Ends With You The Animation Official Account (@TWEWY_PR) April 8, 2021

It is on sale. pic.twitter.com/ncB5j2TLXE

It's about to start.
Thank you! #Zombie Land Saga Revenge pic.twitter.com/fjXuYCytvU

By all means, it's a weapon on the side that doesn't protect the peace of the earth, or a barbaric practice reaping farm tool.

After taking measures against infection, even if I met Eva who wields a huge circular saw at Shin Eva, which is being screened at the movie theater, I wonder if it looked like a magic weapon at a glance to Mr. Gaku of CG. This circular saw does not speak) pic.twitter.com/ab7Eb7aUin

Board the Evangelion as a member of the anti-NERV organization 'Ville' with the 4th Asuka. Details are unknown.

A high-tension romantic comedy!
The director is Anno, the director of the blockbuster movie Shin Evangelion.

Episodes 1 to 3 are being delivered together

A story about plants (reposted) pic.twitter.com/6fTVqyE2sH

For those who are not good at it, I wonder if it is not suitable ... pic.twitter.com/WbMDaYdg4O

This is the best saying of anime this season pic.twitter.com/tkrCxDCkni

'How to submerge your friends and lovers in the swamp'

Don't be impatient Geek's job is not to pull suddenly pic.twitter.com/I46L09P6QT

I drew a manga of rice balls that came out of my heart. # Picture porridge and was able to # Coronate pic.twitter.com/bRQsA9wQSg

This water is sweet pic.twitter.com/OZixWC7iLO

I happened to meet a childhood friend in a maid style. pic.twitter.com/Cl0tkh8X0g

Understand in 5 minutes! TV anime 'How Not to Summon the Demon Lord and the Slave Magic of the Summoned Girl' | The second season will start broadcasting on TBS and BS-TBS from April 8, 2021!


Disappearing orders, early delivery, and the importance of 'waiting people' --- 'One year of Corona and the same person' from the perspective of a printing company: Interview ｜ gihyo.jp… Technical Review Company