'Low Earth Orbit Visualization' where you can see artificial satellites that fill the earth's sky has appeared, and you can also observe how Starlink satellites fly in a row In recent years, space development has become active, as If you uncheck 'Beams' and 'Instruments' in the upper left panel, the radar display will disappear and you can see only the artificial satellites. Also, by default, data is updated and the page is reloaded at regular intervals, so it is convenient to uncheck 'Auto Refresh'. 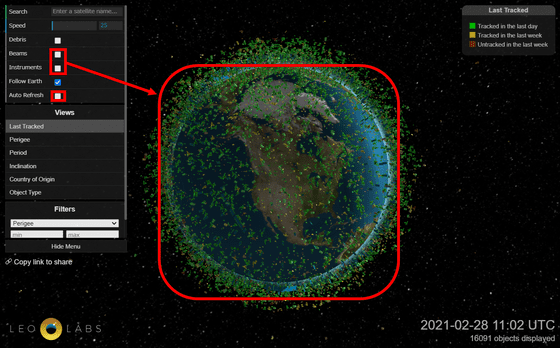 You can move it by dragging it, and you can zoom in and out by pinching in and out of the mouse wheel and smartphone. When I tried to display Japan in close-up, I saw artificial satellites of various shapes passing over the Japanese archipelago. 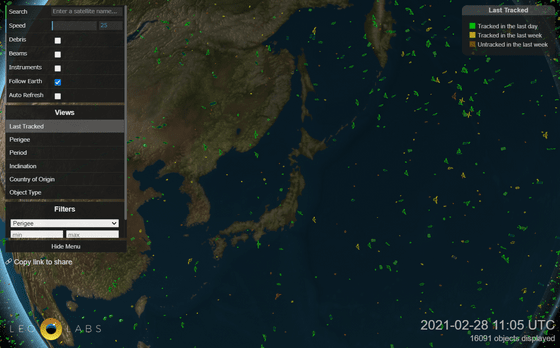 Then, I was able to see the 'Starlink train' in which Starlink's artificial satellites flew in a string of beads. Since this Starlink train is also observed from the ground, astronomers have pointed out that

it will interfere with space observations. By default, artificial satellites are color-coded by 'Last Tracking', but you can color-code them by altitude at the perigee by clicking 'perigee'. The darker the blue color, the higher the altitude of the perigee. 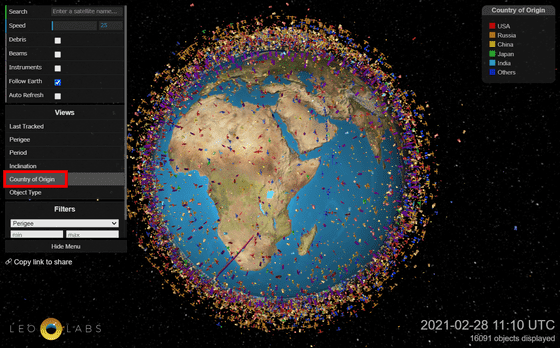 It can be color-coded by 'Object Type' etc.