CES 2021 ', which was held online for the first time in history in response to the global epidemic of the new coronavirus infection (COVID-19). Mobile Processor 'series has been announced. The series uses the same Zen 3 architecture as the Ryzen 5000 for desktop PCs, which CEO Lisa Su describes as 'the most powerful PC processor ever manufactured.'

The newly announced 'Ryzen 5000 Series Mobile Processor' is the same as the previous generation, the performance-oriented 'H series' that can also edit games and videos, and the power-saving 'U series' for ultra-small notebooks. It is roughly divided into '. The performance of each model of the H series is as follows. 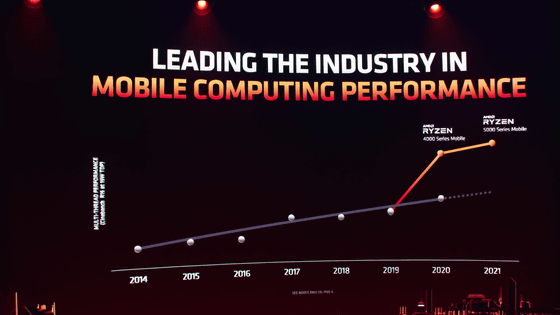 PCMark 10, and the score is 1.23 times that of 'Core i7-1165 G7' which adopts Intel's 11th generation ' Tiger Lake ' Core processor. It excels in knocking out, CG rendering, movie encoding, and the operation of office apps other than Word. AMD describes the model as 'the fastest productivity in ultra-thin notebooks.' The top model 'Ryzen 9 5980HX' is Intel's 10th generation high-end CPU 'Core i9-10980HK' with 13% single thread performance, 35% overall CPU performance, and 19% game physics performance. It exceeds. According to AMD, this model should be installed in the best gaming notebooks in 2021.