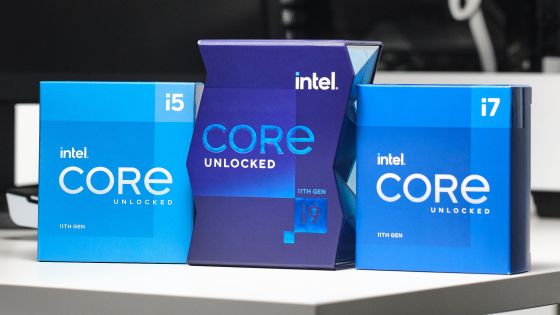 On March 16, 2021, Intel announced the 11th generation Core processor ' Rocket Lake-S' for desktop PCs. The higher-end models Core i9 and Core i7 are equipped with Intel UHD Graphics 750, which uses the Xe architecture, and has enhanced graphics performance.

The specifications of the top Core i9 series in 'Rocket Lake-S' are like this. Equipped with 8 cores and 16 threads, the memory supports DDR4-3200. It supports Intel's performance optimization technology ' Turbo Boost Max Technology 3.0 ', and with the exception of some models, it also supports 'Intel Thermal Velocity Boost' that brings out the performance of the CPU.

The specifications of the Core i7 series look like this. Equipped with 8 cores and 16 threads like the Core i9 series, it supports DDR4-3200 memory. It also supports 'Turbo Boost Max Technology 3.0'.


The specifications of the Pentium Gold series of the refreshed version 'Comet Lake-S' are like this. Equipped with 2 cores and 4 threads like the Core i3 series, it supports DDR4-2666 memory. Performance optimization technology is not supported, but the price is less than 10,000 yen.

Launch into a new dimension of gaming with the new Intel # 11thGen Rocket Lake Desktop Processors.