Research results show that the effects on household income and drinking volume differ depending on IQ and propensity. Intelligence quotient (IQ) is generally used to quantify human intelligence, but in recent years IQ has shed light on propensity because it does not take into account 'propensity to contribute to success' such as curiosity, self-control, and tenacity. Research to hit is also actively carried out. Joint research teams such as the University of Texas at Austin and the Amsterdam Institute of Public Health have revealed the results of a study on the effects of IQ and propensity (non-IQ) on household income and drinking.

What happens if you split the genetic effects on educational attainment into an IQ and non-IQ part?

The research conducted by the joint research team is a study of the correlation that exists between human propensity calculated from genetic data obtained by genome-wide association study and various data such as household income, alcohol consumption, and psychosis incidence. is. 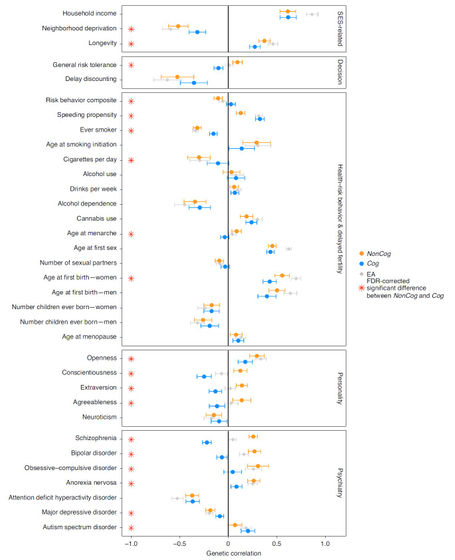 There are two decision categories: 'General risk tolerance' and '

In terms of health, 'Risk behavior composite' is almost unrelated to IQ and non-IQ, but 'Speeding propensity' has a slight correlation with IQ. Higher. 'Ever smoker', 'Age at smoking initiation' and 'Cigeratte per day' can be seen to be more closely associated with non-IQ, but 'Alcohol use' (Whether or not you drink normally) '' Drinks per week (drinking amount per week) 'is almost unrelated to both IQ and non-IQ. Regarding alcohol, it is noteworthy that only 'Alcohol dependence' has a negative correlation with IQ / non-IQ. Other than that, 'Cannabis use', 'Age at menarche', 'Age at first sex', 'Nyumber of sexual partners' 'Age at first birth-woman (age when having the first child, for women)' 'Age at first birth-man (age when having the first child, for men)' 'Number children ever born' -woman (number of children, for women) '' Number children ever born-man (number of children, for men) '' Age at menopause (age at menopause) '. The higher IQ / non-IQ, the later the age of having the first child. 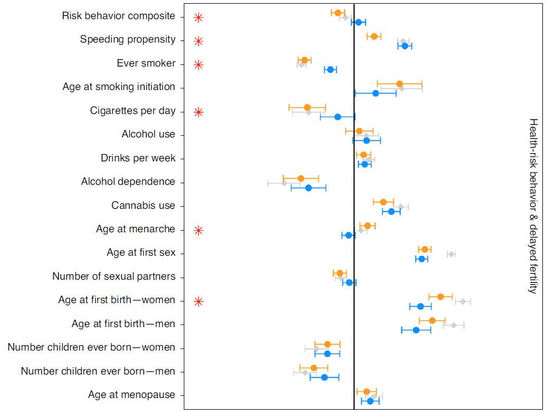 In personality relationships, 'Openness (tolerance)', 'Conscientiousness ( integrity , the height of the self-control force)', 'Extraversion (extrovert)', 'Agreeableness (cooperation),' 'Neuroticism (neurotic tendencies)' and the like. Compared to IQ, non-IQ, which is a numerical value that indicates mental goodness, is strongly related to these elements of personality relationships.