A tasting review of 6 types of 'Pierre Marcolini Collection' that Mister Donut reproduces Pierre Marcolini, which is synonymous with high-class chocolate. From January 8, 2021, Mister Donut has released the ' Pierre Marcolini Collection ', which is the image of the chocolate of the Belgian Royal Warrant '

Pierre Marcolini '.I was wondering how Mister Donut reproduces the high-class chocolate thatcosts more than 370 yen per grain , so I actually bought it and tried it.

So I arrived at Mister Donut. 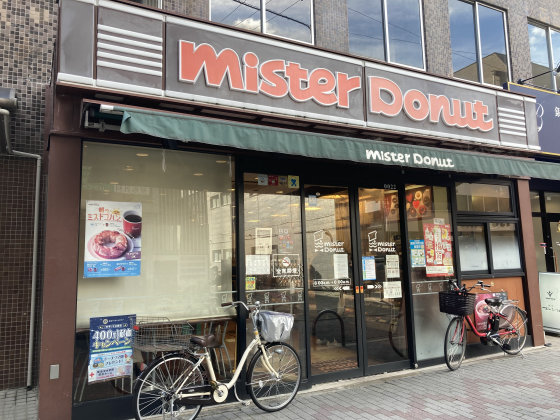 This time, I brought back all 6 types of Pierre Marcolini collection. When opened, it looks like this. Four of the six are in paper cases. I will taste it at once. First of all, I will try 'Fondant Chocolat Donut Chocolat' which is the image of Pierre Marcolini's masterpiece 'Pierre Marcolini Grand Cru' which is 'Bitter ganache blended with carefully selected cacao in the best balance'. 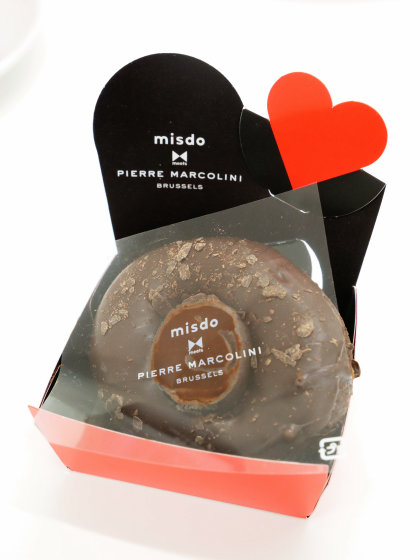 When I took it out of the box, it was about 7 cm in diameter. The size is one size smaller than a normal donut, but the price is 200 yen (excluding tax), which is higher than usual. 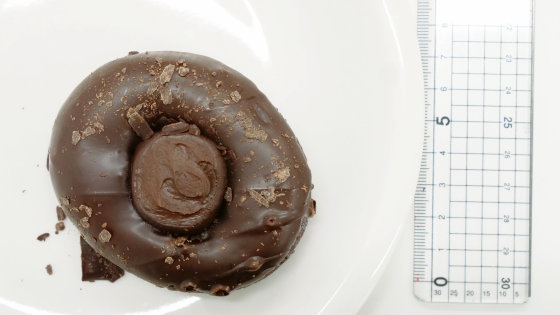 From the side, you can see that what is hidden under the chocolate coating is the same dough as 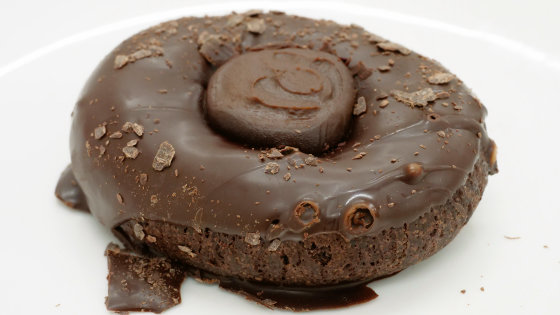 The first bite did not reach the ganache cream that fills the hole in the donut. At this point, the taste is 'Hmm, it's the usual Mister Donut ...' ... 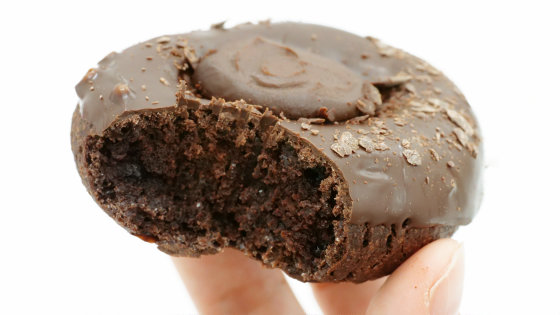 When you put ganache cream in your mouth, the taste changes at once. Ganache cream has a taste of 'cacao' rather than so-called 'chocolate cream', and the scent and sourness of cacao that makes you want to describe it as 'fragrant' spreads softly in your mouth. Although it is bitter, it is not too bitter, and although it is rich, it has a mysteriously refreshing aftertaste, and it is clearly a luxurious finish for adults. If you expect the taste of a sweet donut like Pont de Ring or French cruller, the feeling that it is not this is amazing, so in that sense it can be said that you choose a person to eat. When I take it out of the box, it looks like this. This is also based on chocolate donuts, with ganache cream and framboise fillings in the holes. When I tried it, the rich ganache cream and the sour Franboise go great together. The donuts are covered with a white chocolate coating that is often used for Mister Donuts for a limited time, and berry powder is sprinkled on top of it. The rich ganache cream is for adults, but the sweetness of the white chocolate coating gives it a well-balanced finish of chocolate sweetness, framboise acidity, and cacao flavor. 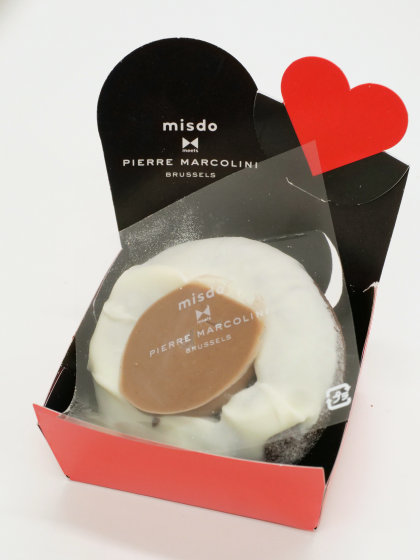 White chocolate coating is applied on top of the chocolate donut, and the holes in the donut are filled with hazelnut cream. 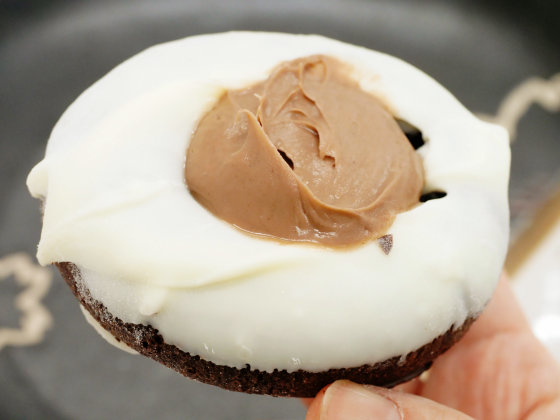 When I tried it, the hazelnut cream had a slightly rough texture like peanut butter, and the nut flavor was quite strong. If you like praline chocolate, you can definitely enjoy it. Ganache whipped cream may be included under the hazelnut cream, giving it a sweeter finish than fondant chocolate donut chocolate. 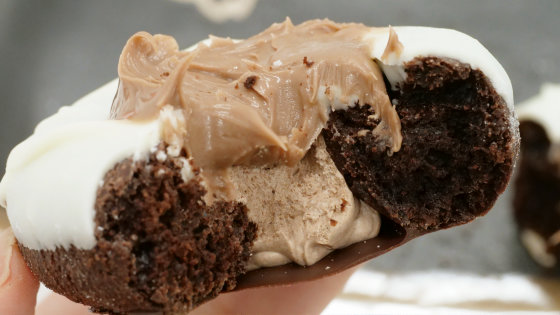 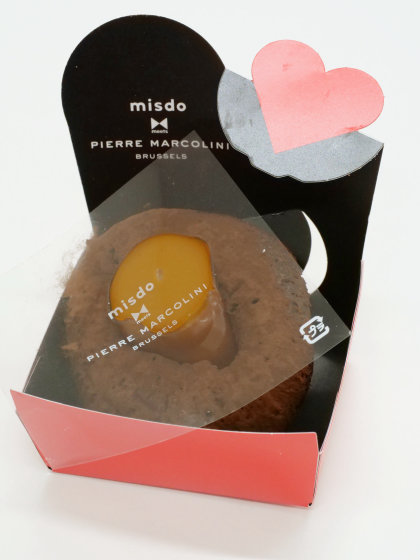 This is a salted caramel cream in the hole. The taste of salted caramel cream stands out because there is no chocolate coating on the donuts and only cocoa powder is on it. However, it is not as thick as ganache cream, it is easy to eat in a good way, and it has a familiar taste, so it can not be said that it is a 'Mister Donut that is different from usual'. 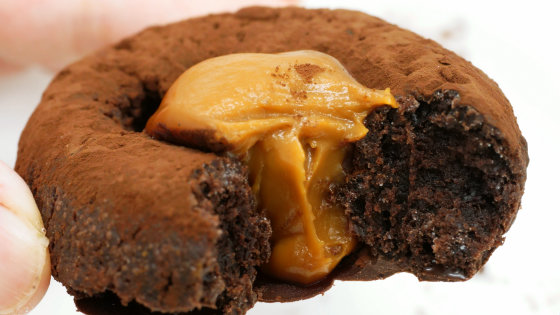 Not only donuts but also Danish pastries have appeared, so I will try this one as well. The size is about 8 cm in total length, which is larger than the donut. You can see that 'Danish Chocolat Franboise' has a white chocolate coating and berry powder on top of the Danish pastry. Ganache whipped cream and framboise filling are sandwiched between the crunchy and crispy cocoa dough. The finish is similar to 'Fondant Chocolat Donut Franboise', but Danish is easier to eat because the dough is less sweet and the ganache cream is not thick. The last is 'Danish chocolate hazelnuts' Ganache whipped cream and hazelnut cream are sandwiched between the cocoa dough. This is also similar to 'Fondant Chocolat Donut Hazelnut' as a whole, but the richness was suppressed because the hazelnut cream was thinly spread and the dough was less sweet. Of the six types, the chocolate flavor is the most subdued, and the sweetness of the white chocolate coating is exposed on the entire surface, so it was the most reassuring taste close to the usual Mister Donut.