Pointed out that there is a possibility that you can avoid website advertisement just by adding '.' to the URL 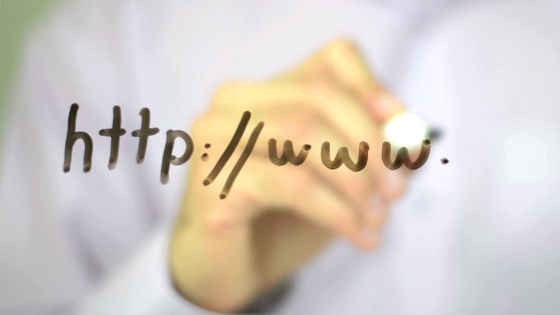 When you browse a website, there are often too many advertisements that make it difficult to see. Even if you use an application that can block ads, the message 'Please turn off the ad blocker' will appear on the website, and the website will be more difficult to see. Meanwhile, instead of using an ad blocker, a report was posted on Reddit that 'Ads will be turned off simply by adding '.' to the website URL'.

fyi: You can bypass youtube ads by adding a dot after the domain :webdev
https://www.reddit.com/r/webdev/comments/gzr3cq/fyi_you_can_bypass_youtube_ads_by_adding_a_dot/ 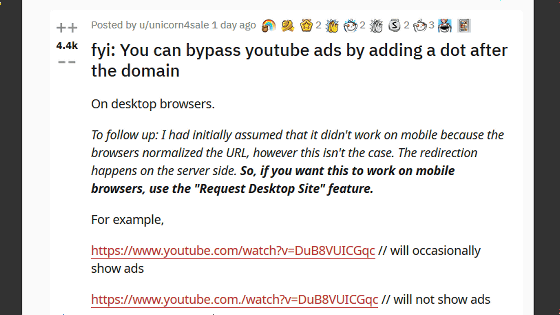 Then, you can turn off the advertisement display on some websites.

This phenomenon is a special case that pierces the website where the host name cannot be normalized. You can see websites, but cookies or cross-origin resource sharing (CORS) don't work properly because the hostnames in your browser don't match. It was also pointed out on Reddit that it is possible to disable the paywall on websites that have a paywall in addition to advertising on the website.

Other Reddit users have pointed out that websites that can create accounts, such as YouTube, may log out if you add '.' to the URL while logged in. Also, while there are people who delight in saying, “We can easily eliminate the advertisement display without using software or extension functions”, but it is not a method that can be used on all websites. It was better to introduce an ad blocker.'

The problem of adding '.' to the host name of the URL was also reported in Bugzilla about 19 years ago when it was talked about as a way to avoid ads on Reddit. 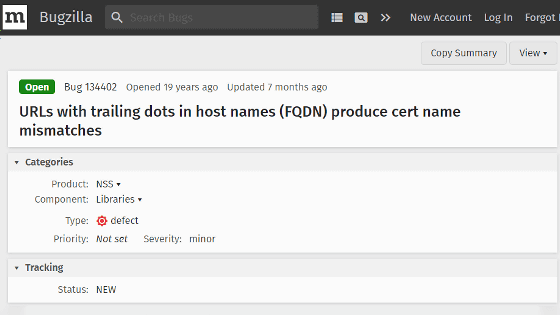 Bugzilla reported that when accessing a website with Mozilla Suite , the addition of '.' to the URL causes the browser to misrecognize the host name and display a security warning. Discussions have been going on in Bugzilla for about 14 years, but similar bugs may occur in Google Chrome and Safari, so it was not mentioned as a big issue.

The method of identifying the location of websites on the Internet by URL has been used since 1990. However, because it is long and complicated, URLs have many drawbacks. In addition to the above-mentioned easy avoidance of advertisements and security errors, there are also many cases of malicious use in phishing scams. In order to improve the safety of the Web, Google has also stated in the past that ' URL should be eliminated ', but in reality the epoch-making system as a substitute for URL has not appeared at the time of article creation is.