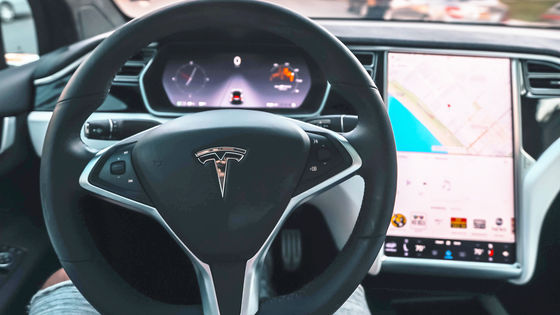 It is reported that the autopilot function of the model X , an electric vehicle (EV) compatible with automatic driving released by Tesla, 'saved the lives of eight occupants including the driver'.

In February 2020, financial consultant Lawrence Sanderson went on a family trip to Dorset , southwest England, with his wife and three children. Unfortunately, at the same time as the Sanderson family's family trip, a massive storm 'Dennis' hit the British Isles directly. Transportation disruptions were seen throughout England, and the government declared a catastrophe .

On the night of February 15, 2020, when Dennis landed, Mr. Sanderson was driving a Tesla Model X with his family, and a 400-year-old tree was suddenly collapsed by a storm. thing. Normally the brakes were not in time and the crashed tree was crashed at a blazing speed, but sudden braking was activated automatically. As a result, the car crashed into a tree, but Sanderson's wife hit his head and chest, leaving three children completely intact and the whole family safe. Tesla's Model X is equipped with an external camera, an ultrasonic sensor, and an AI chip that enables level 2 autonomous driving. Level 2 autonomous driving means that the system can perform accelerator, steering and braking while observing the driving environment, and the driver needs to constantly grasp the steering wheel to monitor the driving situation, but to some extent the system It is possible to entrust driving. This time, the emergency brake was activated by the autopilot function.

'We couldn't react in time to the falling tree, so it would have definitely been crushed. Model X definitely saved our lives,' said Sanderson. Without the Model X autopilot, we would have died. ' In addition, the oncoming vehicle driven by construction company Josh Whiterock also crashed into the same large tree, and by chance, Whiterock's car was also a Tesla Model X. Mr. White Rock said on the way home with his lover and his mother on the way home, the moment he saw a fallen big tree tearing off the power line and scattering sparks, suddenly driving the model X suddenly braked.

After smashing on a fallen tree, Mr. White Rock was worried that his lover and his mother had been crushed by a large tree, but they were all safe. The image below is taken by White Rock shortly after leaving the driver's seat. After leaving the family from the car, Sanderson and Whiterock confirmed each other's safety and understood that the autopilot function of the Tesla Model X saved eight lives at the same time. 'Life can end in a fraction of a second, but not this time, thanks to Tesla for making a great car,' said Sanderson. Sanderson also thanks the locals for helping the Sanderson and White Rock families.

In addition, both Mr. Sanderson and Mr. White Rock's Model X seem to have been scrapped, but it seems that Range Rover Sports was provided by the owner of the land where the large trees that fell were growing.