Research to make beef using a 3D printer in space Speaking of artificial meat, there are Impossible Foods adopted by Burger King on its menu, Beyond Meat used by McDonald's and Kentucky, etc.Israel startup Aleph Farms is an international space that flies about 400 km away from the earth I am trying to make artificial meat at the station (ISS).

The first artificial meat created by Aleph Farms is a “strip” of steak meat released in December 2018. Although artificial meat at this stage was “meat”, it had problems with “taste”.

In addition, the strip that can be said to be a prototype of artificial meat by Aleph Farms was cut at 50 dollars (about 5400 yen). Considering that the cost of producing the world's first artificial meat announced in 2013 was 25,000 euros (about 29,000 yen), the strip seems to be 'cheap'.

Below is a photo of the artificial meat and strip cooked. In addition to the taste, there seems to be a problem of “thickening the meat thicker than 5 mm”. 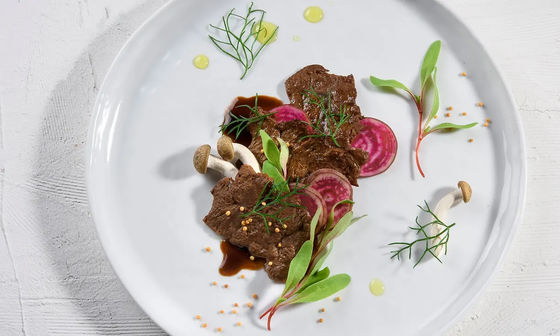 Meat generation using a 3D bioprinter is performed under microgravity conditions in the ISS, and in the future it will be possible to provide `` meat as food '' to people living in space using this technology It is written that it becomes. Mr. Etovia said, “The amount of water required to produce 1 kg of beef is about 10,000 to 15,000 liters, but we cannot secure that much water in outer space. “This is an important first step towards achieving the vision of ensuring the next generation of food security while preserving existing natural resources.”

Although it is an environmental problem that has been seen as a problem in recent years, there are also research papers that claim that “human beings need to greatly reduce the amount of meat eaten” in order to reduce greenhouse gas emissions that contribute to it The In addition, there is a claim that the greatest approach that individuals can take to environmental problems is to “stop eating meat and dairy products”, so Aleph Farms artificial meat is not only a food problem but also an environmental problem. However, it also suggests that it can be an excellent approach.