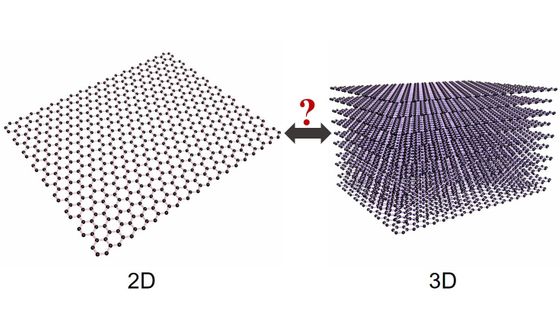 Graphene called “dream material” is a sheet of carbon atoms that is only one atom thick, so it is often called the “world's first two-dimensional material”. Such graphene research has in fact confirmed that graphene also has three-dimensional properties.

Graphene is a honeycomb structured sheet with carbon atoms bonded in a hexagonal shape. It is transparent and soft, but stronger than diamond, and has the highest thermal and electrical conductivity among all materials. Therefore, the capacity of the battery and the strength of the concrete or the doubles, the organic EL display of ultra-thin materials and seawater to fresh water addition to applications in a variety of applications, such as filters that may have been expected, in recent years instead of the bone that was broken In addition, it has been found to be used as a barrier to prevent mosquitoes, and graphene is a “dream material” with unlimited potential. Professor Yiwei Sun's research group at the University of London, Queen Mary, who was doing research on such graphene, applied pressure to graphite (graphite) with a structure in which graphene and graphene are layered, and from the magnitude of strain I was conducting an experiment to check the hardness. In this experiment, the graphene was harder than graphite under the same pressure, which was contrary to the theoretically derived prediction. Therefore, the research group speculated that 'the graphene might stick to the base for measuring pressure, resulting in it being harder than it actually was.'

Based on the above assumption, Professor Sun et al. `` High pressure Raman measurements '' that mix samples with acrylic resin gelled by heating and optically analyze objects that are not fixed To investigate the behavior of graphene under high pressure. As a result, it was confirmed that graphene and graphite were almost the same hardness. However, a new question has arisen here: “It is strange that graphene, which should be only one atom thick, is the same as graphite distorted by pressure”.