'Valleytronics ', which is applied to devices by using the 'valley degree of freedom' of electrons in crystals, has been actively researched recently as it can realize the low power consumption and large capacity required for next-generation electronic devices. It is MS Mrudul and colleagues at the Indian Institute of Technology, Bombay , reported that they had achieved previously difficult valley control in graphene , demonstrating the potential success of technology that achieves one million times faster computing speeds than today. ..

Valleytronics is about to be used as a new technology to succeed spintronics. This is a technology that uses the degree of freedom of where electrons enter in the conical 'valley' that indicates the minimum value of the energy band in the band structure that shows the relationship between the energy of the material and the wave number. 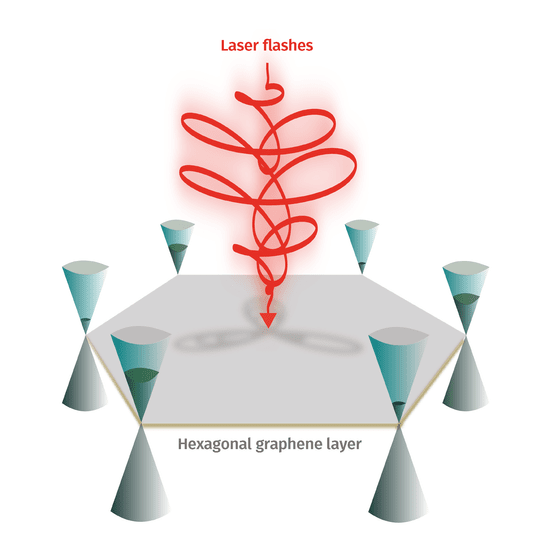 In order to realize valettronics, it is necessary to use substances with a degree of freedom in valet, but general substances do not have this. Therefore, at Valleytronics, research is being conducted using

'graphene, ' a sheet-like material with a honeycomb structure that is as thin as an atom and has a degree of freedom in the valley. However, graphene has been considered difficult to control the valley by itself due to its peculiar metallic state and chiral symmetry. So Mrudul and colleagues figured out a way to take advantage of the graphene valley using light.

According to Mrudul et al., By adjusting the polarization of the two laser beams according to the triangular lattice of graphene, it is possible to cause the polarization of the valley and break the symmetry between carbon atoms to utilize the anisotropic region of the valley. It will be possible. As a result, information can be effectively 'written', and in theory, Valleytronics, which achieves a calculation speed more than 1 million times that of modern times, will be possible.

Mrudul and colleagues said that one of the most attractive aspects of controlling the valley in graphene was that it could be performed at room temperature, and that it saw the feasibility of a general small general-purpose quantum computer.