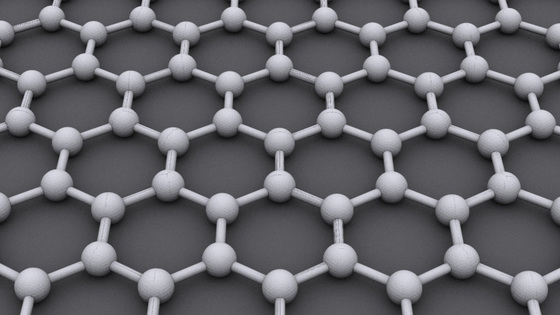 ' Graphene ' is a very thin sheet-like substance that is composed of a hexagonal lattice structure of carbon atoms and is about one atom. A paper has been published that makes it possible to make microchips that are much smaller than before by folding graphene, which is the next-generation material, like origami.

Until now, it has been known that deforming the structure of sheet-like nanomaterials such as graphene and molybdenum disulfide changes the electrical properties. However, it has not been clarified how to fold it to obtain what kind of electrical characteristics.

According to a research team at the University of Sussex in the United Kingdom who published the paper, graphene sheets have properties similar to electronic components by intentionally creating twists in graphene. Crumpled graphene has been found to act like a microchip, about one-hundredth the size of a conventional microchip. The researchers claim that this graphene folding is a more environmentally friendly and sustainable technology because it requires no additional material other than graphene and can be done at room temperature rather than at high temperatures.

It is said that Moore's Law , which doubles the number of transistors on a microchip every two years, is difficult to achieve even with recent technological developments, but the IT news site ZDNet says, 'This By applying the folding of nanophenes, we may be able to comply with Moore's Law again. '

Professor Dalton also said, ''Straintronics' by folding nanomaterials helps to miniaturize chips in any device.' 'Ultimately, the application of graphene will make computers and smartphones thousands of times faster.' Said.