Streaming a state in which to play the game

Ninja is a person who has been playing games on Twitch since 2011, and is a very popular person in the world of the popular battle royal game “ Fort Knight ”. In March 2018, in an interview with the economic newspaper Forbes, it became a topic that revealed that the monthly income obtained from distribution on Twitch is about 500,000 dollars (about 53 million yen). 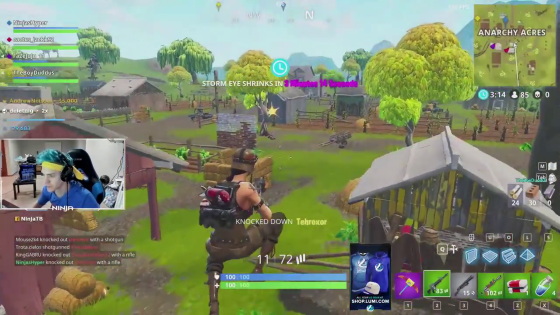 In addition, it was reported that a reward of 1 million dollars (about 110 million yen) was earned just by playing live game `` Apex Legends '' of the battle royal game that started service in March 2019, and again the degree of attention of the game live situation The appeal of the height and the influence of popular distributors will be announced to the world. 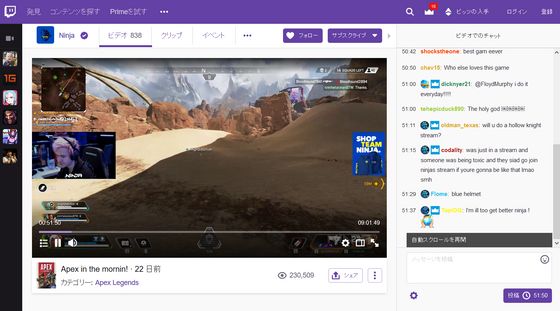 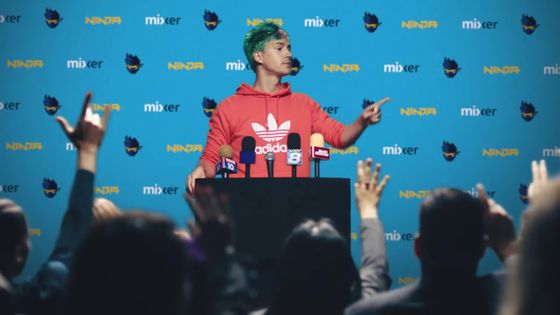 More than a week has passed since Ninja transferred from Twitch to Mixer, but the handling of `` https://www.twitch.tv/ninja '', the dedicated channel of Ninja on Twitch, is significantly different from general accounts It has become a hot topic.

The point is that since the transfer announcement on August 1, Ninja's dedicated channel on Twitch has no longer displayed archived contents of live play delivered in the past. Instead, 404 page that displays recommended content related to Fort Knight was displayed, but at the top of this page to the live delivery that displayed thumbnails of two men and women who are sexually acting with Russian titles The link of was displayed.

The red frame at the top of the image is the URL bar of the browser, where “twitch.tv/ninja”, the URL of the Ninja Twitch channel page, is entered. Below that, `` The streamer you're looking for is in another castle. '' Is displayed, and it is written that Ninja has transferred from Twitch, Below that, live broadcasts related to Fort Knight are lined up. However, one of the problems is that one of them is a link to a channel that distributes pornographic videos. The problem was not only that `` link to pornographic video distribution '' was displayed, but as soon as Ninja announced the transfer, the dedicated channel on Twitch became treated differently from other users It is a point. According to Ninja, in the case of other distributors, the archived content can be browsed, but in the case of Ninja, all the content cannot be browsed. Normally, 404 pages will not be displayed unless you mistype the URL or access a nonexistent channel.

And So Sorry Disgusted. Pic.Twitter.Com/gnUY5Kp52E

Ninja commented on Twitch's mishandling of his channel and URL, 'This doesn't happen with other users who are offline. It only happens with my account.' “I've been streaming for the past 8 years, building brands, building channels, and gaining 14.5 million followers. But Twitch used my channel to promote other distributors. I accuse Twitch. '

Ninja says 'I am thinking of deleting the channel itself' in response to my Twitch account being mistreated. Ninja's dedicated channel on Twitch has returned to normal handling at the time of article creation, and archives of movies distributed in the past are stored.