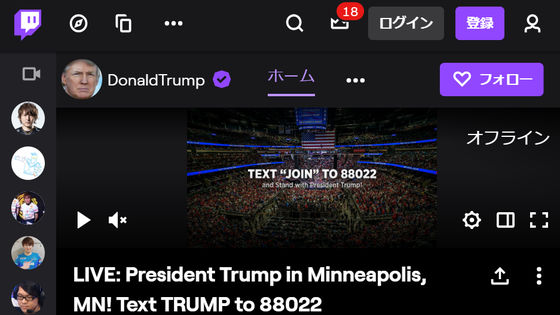 The 45th President of the United States, Donald Trump, has opened a channel on Twitch, a live streaming platform under Amazon. Speaking of President Trump, Amazon criticizes the fact that Amazon makes more than 1 trillion yen in income but pays zero taxes, or Washington Post , a newspaper company acquired by Amazon's Jeff Bezos CEO, `` Fake News and ' criticism and or, it is also known to be a person who has something hostile with Mr. Amazon and Bezos. It is also drawing attention that President Trump has opened a channel on Amazon's Twitch.

President Trump has opened his own channel on Twitch. The number of subscribers (followers) has already exceeded 35,000 at the time of article creation. Supporters can donate to the Trump camp from the bottom of the official channel. You may have imagined that President Trump will deliver the game live by opening a channel in Twitch specializing in game live delivery, but what is actually delivered on the channel This is his political activity. In addition, President Trump distributes a large-scale supporter meeting held on 10 October in Minneapolis, Minnesota, USA on the channel.


President Trump is not the only politician who distributes his political activities on Twitch. Senator Bernie Sanders, who was running for the 2020 US presidential election and fought with President Trump, also opened his own channel .

In addition to the above, President Trump is also pressured to make competitive bids that would create opportunities for companies other than Amazon for the DoD cloud contract.

It is clear that President Trump is dissatisfied with Amazon and Mr. Bezos, but it was a surprise that the channel was opened at Twitch, which is affiliated with Amazon, The overseas media The Verge said, `` Trump It looks as if I acknowledged something important, 'he says,' Jeff Bezos platform (Twitch) must follow Jeff Bezos rules. '