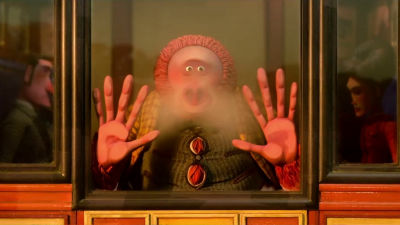 Stop motion animation production studio Leica who gets a high reputation such as stop motion animation movie " KUBO / Kubo two strings secret " etc. set in the medieval Japan originated from abroad is the son of Larry Ellison who is CEO of Oracle It is the movie producer who was responsible for the movie " Terminator: New Launch / Genisis " in collaboration with movie production company Annapurna Pictures , which Megan Ellison launched, is a "stop motion animation film" Missing link ". The first trailer was released in November 2018, but the second part of the trailer was released and the adventure of a mysterious monster embodying Missing Link with Sir Lionel Frost playing Hugh · Jackman is accelerating .


The trailer starts from the line that "I will guarantee you encounter with the legendary monster".

A huge foot that runs through the line of words "it is neither a monkey nor a human being".

And it was Mr. Link that appeared. "He is going to see Susan," he asked Sir Frost for his job.

Sir Frost asked Mr. Link that "It's the name of a girl ... but ..." the answer "Yes it is" comes back. Mr. Link is a mysterious monster left alone in the mountains, there seems to be something asking Sir Frost.

"I need a man who knows the wilds around the world, and you are the greatest adventurer in the world," explains why Mr. Link asked Sir Frost.

A rope thrown by Sir Frost will capture the gigantic creature.

The threat of legendary monsters ......

What is that to Sir Frost the world's greatest adventurer.

Sir Frost asking Mr. Link, "What would you like to ask me for?"

"I am sad, I am the last one in my tribe, but there are other creatures on the other side of the world"

"In my opinion, I think that Yeti is my cousin, please please take me to them until then", finally talking about its purpose Mr. Link.

In response to this, Sir Frost answers "I promise" and the journey begins.

Two people who decided to prepare a map at first because it will be a long journey to the other side of the world.

And somehow it seems to have invaded a building somewhere. Mr. Link makes a fuss over the first trespass.

Mr. Link will overcome the wall by making use of its superhuman physical ability and start a strategy to raise Sir Frost. Mr. Lynn enough of spirit.

Falling in the middle and crashing into the wall.

It is successful in securing intrusion routes in a way different from what you intended.

Mr. Link that wraps in robes to hide the identity.

For some reason developed into a big brawl involving the whole bar ... ...

Mr. Link is also attacked with chair. However, Mr. Link which does not move slightly.

I will blow off a drunkard with that arms arm.

Mr. Link which can not completely hide the excitement of man's invention which touches for the first time. Attach the nose to the glass perfectly and enjoy the view from the train window for the nose rash.

Adventurer Adelina Fort Knight who will become a friend on the way also appeared.

"Are you traveling around the world looking for Yeti's residence?"

What came over led me to an old woman named gum living in the mountains.

The nail was inserted as a guideman "Do not mention chickens", but Mr. Link has asked straight to the question, "Why are you putting chicken?"

Three people like this will be a friend of adventure seeking the living of Yeti. Fort Knight's pinch of desperate ... ...

How do you deal with Mr. Link?

Finally find out if you are living in Yeti who was looking for it, Mr. Link murmuring "Shangri-La!"

"We call this place" Uvoa aaaaaa "," Yeti in a noble atmosphere that raises a cemetery-like bullseye. When Lord Frost asked, "What do you mean?", It is obvious that it means "We do not want to enter. We dislike you".

And it will be trapped in the hole of ice as it is.

In addition, the movie 'Missing Link' is scheduled to be released on April 12, 2019 in the United States.