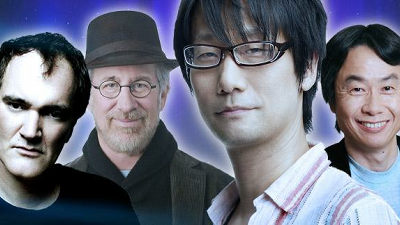 With the spread of games around the world and the recognition of game titles as works, the names of game designers who create masterpieces have become widely known.

According to overseas game site 1UP.com, great games that have expanded the world of games, such as Hideo Kojima, who is known for the 'Metal Gear' series, and Shigeru Miyamoto, the creator of 'Super Mario Bros.' and 'The Legend of Zelda.' The designers have the same abilities as great film directors like James Cameron and Stephen Spillberg. We will look at what they have in common with the video of the work.

1. Nintendo's Shigeru Miyamoto and Steven Spielberg
Ability to create attractive icons such as Mario and ET, Link and Indiana Jones

Shigeru Miyamoto developed 'Super Mario Bros.' in 1985 and 'The Legend of Zelda' in 1986. Both have become popular and unabated series after more than 25 years, and the main characters of both series, Mario and Link, are both one of the leading characters in the game world. The movie below is 'Super Mario Bros.'


Steven Spielberg, on the other hand, released 'Raiders of the Lost Ark' in 1981 and 'ET' in 1982, the first in the Indiana Jones series. Both characters have long been loved and have become the symbol of the movie.

Spielberg is also known as a gamer and appreciates 'Shenmue'. At E3 in 2006, Shigeru Miyamoto and 'Wii Sports' are playing tennis.

The movie below is a trailer movie of 'ET'.

Tim Schafer is a game designer who leads the game production team 'Double Fine', which launches unique titles such as 'Stacking' and 'Psychonauts' one after another. The appeal of his game is the world view that makes you feel sad in the unique humorous gameplay. The movie below is 'Stacking'. It is a story about the main character traveling to save his parents who have been deceived and enslaved in a unique world view where the people around him are only matryoshka dolls.


Terry Gilliam is a British film director and a member of the comedy group Monty Python. His director, 'Brazil in the Future Century,' depicts a desperate management society while inviting laughter with comical images.


In addition, Terry Gilliam is in charge of animator in the video of Monty Python, and develops a unique world view animation.

Hideo Kojima is the creator of the 'Metal Gear' series and is also the Executive Vice President of Konami Digital Entertainment. A game designer who has a style that makes full use of cinematic techniques, responds quickly to new hardware, and is good at pushing the performance of hardware to the limit.

In addition, he is the only person in the Japanese game industry called 'director', and he answered about this 'because he is the same as a movie director and directs the game'. In 'Newsweek' magazine released on December 24, 2001, he was the only Japanese to be selected as '10 people who will open up the future'.


James Cameron, on the other hand , directed the science fiction masterpieces 'Terminator' and 'Alien 2' , and released 'Avatar' in 3D video in 2009. It was a work that ignited the 3D movie boom.

A god game is a game in which the player uses divine powers that interfere with the world of the game to move the world toward a goal. In this pioneering 'Populous', the player becomes the god itself, and the people scattered on the game field worship themselves and destroy the people who worship the hostile god. You can see the actual gameplay from the movie below.


After these successes, Peter Molyneux will create an RPG titled 'Fable'. Although Morinyu gained fame in the god game, in 'Fable' it is completely up to the player to decide what kind of person the hero will live as, and depending on the judgment of good and evil, he can become a hero, a sinner, or a love affair. As a result, we succeeded in creating a game with an extremely high degree of freedom at that time, such as getting married.


Francis Ford Coppola founded the film production company American Zoetrope in 1969 at the age of 30, and signed seven film production contracts with Warner Bros. Pictures. However, Warner executives criticized the first work 'THX 1138', and the contract was canceled. In a pinch, Coppola creates the classic 'The Godfather' in movie history.

In the following 1979 'Apocalypse Now' , due to Coppola's extraordinary perfectionism and numerous troubles, the shooting schedule, which was originally scheduled for 16 weeks, was extended to 61 weeks, and the production cost was initially 12 million. It has risen from the dollar (about 3.5 billion yen in Japanese yen at that time) to 31 million dollars (about 9 billion yen). Even though the work was exhibited unfinished, it won the highest award 'Palm d'Or' at the Cannes International Film Festival. After the release, it became a big hit all over the world, and we were able to recover a large amount of production costs safely. The movie below is a trailer of 'Apocalypse Now'.


Coppola has experienced three bankruptcies since 'Apocalypse Now', but in recent years, he has entered the management of Nibaum Coppola Winery in Napa Valley, California. The wines produced there received worldwide acclaim, making Coppola one of the richest men in the United States.

5. Goichi Suda and Quentin Tarantino
Strong love for past works and the ability to sublimate that love into your own work

Goichi Suda is an extremely original game designer who has received overwhelming support overseas rather than in Japan. Suda's works, such as 'killer7' and 'No More Heroes,' depict the vulgar world and violence, and why are they so stylish and exhilarating.

Another major feature of Suda's work is that he has a lot of love for various past pop cultures. The main character of 'No More Heroes' is modeled on Johnny Knoxville of 'Jackass' , and the first enemy, Helter Skelter, is a tribute to music and movies, such as the name being derived from the Beatles song. You can find it everywhere.

The movie below is a trailer movie of 'killer7'.


Quentin Tarantino has also created beautifully depicted crimes and violence at a light tempo. 'Reservoir Dogs' , which was his debut as a director and also a successful work, is based on George Baker's 'Little Green Bag' as the theme song, with sophisticated and stylish visual expression and detailed human depiction. It has a very high reputation.


In addition, ' Kill Bill' is a work that self-identifies as 'Cinephilia', is familiar with Asian movies such as Japan, and fully exposes its influence. In the 'Kill Bill' end roll, Tarantino's respected actors and film directors who have already died are listed as 'RIP', including the names of Kinji Fukasaku and Shintaro Katsu. ..


6. Atari 's Nolan Bushnell and Orson Welles
A pioneer who defines his genre by work and imitates it by all later people

Nolan Bushnell is the founder of Atari and is known as the 'father of video games (industry).' 'Pon' was released in 1972, and it became a huge opportunity to make computer games penetrate the American market.

When 'Pon' was first released, it was in the early days of Atari, and when 'Pon' was sold, it was a bicycle operation that bought equipment with the money and made 'Pon' again, but the sales themselves were tremendous, and Atari was rapid. Achieve growth. First, we rented the next room to expand the production equipment, and then rented a crushed roller skating rink and remodeled it into a factory to expand the scale. Starting with a capital of $ 500, Atari will record more than $ 3.2 million in sales the following year. In this way, Atari created the game industry in the American market and laid the foundation for the later game industry.


Orson Welles is one of Hollywood's leading film directors. Originally debuted as a stage actor in Dublin, Ireland, he demonstrated his talent as a director in the Federal Theater Project by the US government after the Great Depression. In the radio drama 'Martian Invasion' , despite refusing to be fiction many times, the production was so realistic that people who listened to the radio thought that the Martian had really invaded. I was invited to Hollywood.

'Citizen Kane,' which became a director's work in Hollywood, is based on the newspaper king William Randolph Hearst and reveals his life. I did. However, as an innovative work in various aspects such as shooting technique, plot composition, and sound effects, 'Citizen Kane' will have a tremendous influence on future film production.


In recent years, Oren Peli , the director of 'Paranormal Activity,' which was produced with a budget of 15,000 dollars (about 1.15 million yen) and generated box office revenue of more than 300 million dollars worldwide, is also a game designer. It is known to be active. Game design and movie production seem to be shortening the distance with the development of game hardware.

When playing the game, it may be interesting to look for points such as 'This game designer's production is similar to George Lucas' production'. Perhaps in the near future the game designer will be called 'George Lucas in the game industry'.