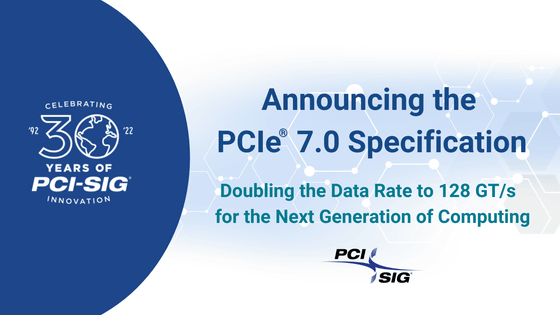 PCI-SIG, a specification organization for

PCI Express (PCIe), an I / O serial interface, announced the initial specifications of PCIe 7.0 at the developer conference ' PCI-SIG Developers Conference 2022 ' held in California. .. PCIe 7.0 has a data rate of 128GT ( transfer ) / s and a maximum bidirectional transfer rate of 512GB / s with a 16-lane configuration, and is targeted for release in 2025.

Announcing the PCIe® 7.0 Specification: Doubling the Data Rate to 128 GT / s for the Next Generation of Computing | PCI-SIG
https://pcisig.com/blog/announcing-pcie%C2%AE-70-specification-doubling-data-rate-128-gts-next-generation-computing

Specifications for the communication standard 'PCIe 6.0' boasting a maximum transfer speed of 256GB / s have been completed --GIGAZINE

It was announced that the initial use of PCIe 7.0 announced this time will be a data rate of 128 GT / s, which is twice that of PCIe 6.0, and a maximum bidirectional transfer rate of 512 GB / s (16 lane configuration). PCI-SIG shows in the graph below that 'PCIe transfer speed has doubled in a span of about 3 years.' 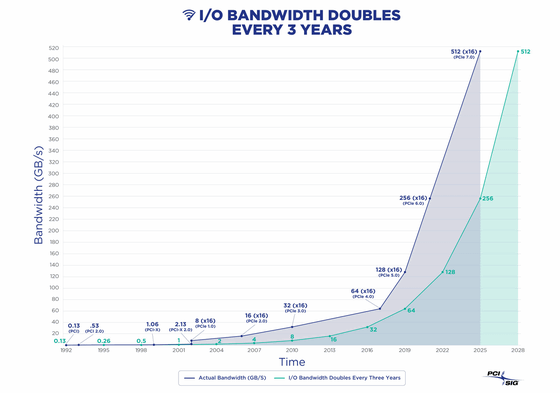 Below is a table summarizing the transfer speeds of the PCIe standard so far. Other considerations include the use of PAM4 signals, attention to channel parameters and reach, the pursuit of low latency and reliability, improved power efficiency, and backward compatibility with previous PCIe standards. PCI-SIG says PCIe 7.0 will support data-intensive applications and markets such as 800 Giga Ethernet, artificial intelligence and machine learning, high-performance computing, quantum computing, large data centers and clouds. ..

In addition, PCI-SIG has stated that it aims to release it to members by 2025, and it is expected that PCIe 7.0 compatible products will be released to the market from around 2026.

At the time of writing the article, PCIe 6.0 compatible products have not appeared on the market, and PCIe 5.0 has just begun to hit the market around 2021. For example, Intel's 12th generation Core processor ' Alder Lake ' supports PCIe 5.0, but the Xeon processor will be supported by the 4th generation 'Sapphire Rapids' scheduled to be released after the latter half of 2022. In addition, AMD's Epyc processor is still only compatible with PCIe 4.0, and the processor for PC will be compatible with PCIe 5.0 from Zen 4 architecture, and the Ryzen 7000 series scheduled to appear in the fall of 2022 will be the first model.

AMD announces Ryzen 7000 series that supports DDR5 & PCIe 5.0 with Zen 4 architecture, scheduled to be launched in the fall of 2022 --GIGAZINE PCI-SIG Chairman Al Yarnes, who will celebrate its 30th anniversary in 2022, said, 'We will continue PCI-SIG's 30-year effort to'push the limits of specifications'. PCIe technology will meet the demand for high-speed transfer. As we continue to evolve to meet, we will focus on channel parameters and improve power efficiency as well. '