In modern computers, a standard called

The Evolution of the PCI Express Specification: On its Sixth Generation, Third Decade and Still Going Strong | PCI-SIG
https://pcisig.com/blog/evolution-pci-express-specification-its-sixth-generation-third-decade-and-still-going-strong

PCI-SIG has also released a movie that appeals to the PCIe 6.0 specifications.


PCIe 6.0 supports PAM4 signal transmission and Flit-based encoding, resulting in a transfer rate of 64 GT / s, which is twice that of PCIe 5.0. 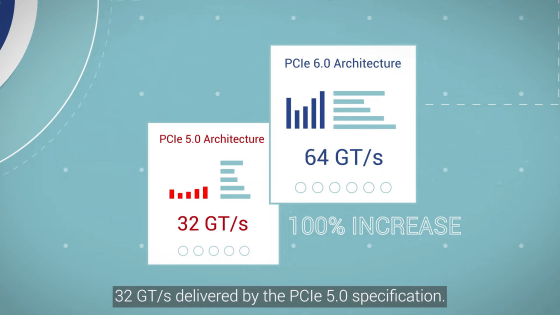 In the computing market in recent years, infrastructure tends to be complicated by various processors and accelerators, but PCIe 6.0 enables low-latency connection using high bandwidth. For this reason, it will meet the demand of markets that require complex infrastructure such as high performance computing, autonomous driving, IoT, and military purposes.