I tried using the extension 'Caption Speaker' that automatically translates and reads out YouTube subtitles. 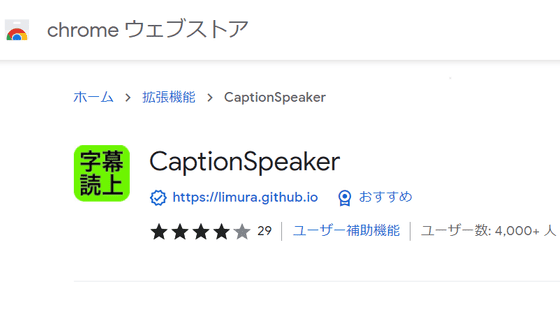 When playing YouTube videos in languages other than Japanese, you can view subtitles and use the automatic subtitle translation feature, but this will require you to continue reading the subtitles. However, if you use the extension ' CaptionSpeaker ', the subtitles will be automatically translated and read aloud, so I tried to see what it actually looks like.

GitHub --limura / CaptionSpeaker: CaptionSpeaker is a chrome extension that allows you to hear the subtitles displayed on youtube by speaking them.
https://github.com/limura/CaptionSpeaker

'Caption Speaker' is distributed only for Chrome at the time of article creation. First, access the extension distribution page and click 'Add to Chrome'. 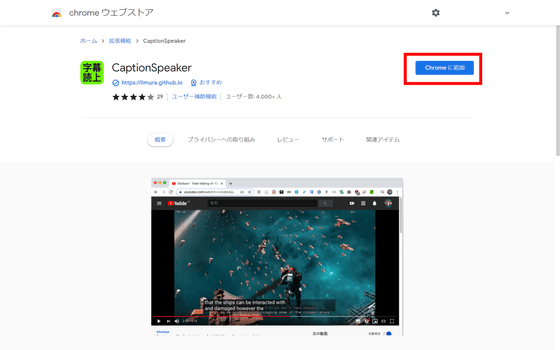 Then, you will immediately be taken to the Caption Speaker settings page. By default, the subtitles are translated into Japanese and read aloud, and you can set the pitch, speed, loudness, etc. of your voice from this page.

With the default settings, I played the science video '


So, I decided to play with the settings a little. Click the extension icon in the upper right corner of Chrome, click the hamburger menu from the Caption Speaker column, and click 'Options'. 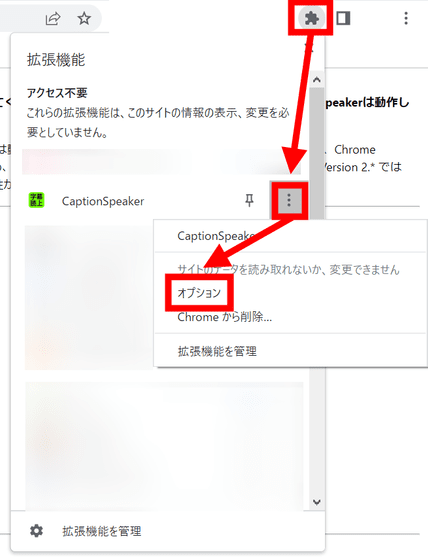 
In addition to the default voice (Microsoft Ayumi), Microsoft Haruka, Microsoft Ayumi, Microsoft Ichiro, and Google Japanese are available for reading aloud, and you can choose your favorite voice. It is also possible to translate the voice into a language other than Japanese and read it aloud.

video of ' VOICE AVATAR Nana Voice Nina ' that anyone can easily convert to a beautiful girl's voice from a browser, I asked them to translate Japanese into English and read it aloud. The human voice was read aloud, but the machine-generated voice was not recognized by YouTube as a voice, or the subtitles were not generated in the first place and it was not read aloud. Caption Speaker translates and plays 'only when the video has subtitles', so if there is no subtitles like this time, reading will fail.


If you leave the extension installed and do not make any settings, the YouTube video will start reading each time you open it. To prevent this, click the extension icon in the upper right corner of Chrome and click the pin mark ...

It is also recommended to make it resident on the toolbar. You can turn on / off the reading function at any time by clicking the icon that says 'Read subtitles'.