Gamers hate 'NFT' but music fans like it, why? Digital files such as images, videos, and sounds can be easily duplicated, but non-fungible tokens (NFTs) , which use blockchain technology to give uniqueness to these digital files, have become so popular that they are called bubbles. I'm showing you. Platformer, an IT news site, discusses this tendency of NFTs, 'gamers hate NFTs, but music fans like NFTs.'

NFTs that give uniqueness to digital concepts and itemize them like works of art have shown a rise in popularity to the extent that they are called bubbles, and as of March 2021, when transactions began to surge, they were already 7.5 billion yen. NFT art that is sold at is also appearing.

One piece of NFT art will be sold for the highest bid of 7.5 billion yen-GIGAZINE 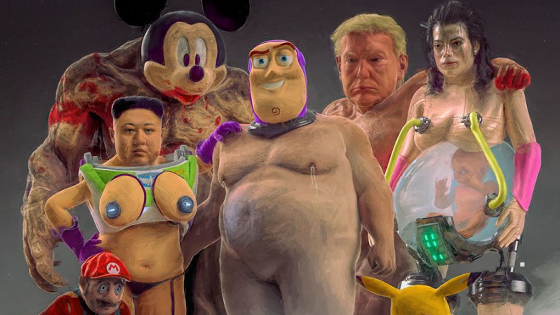 Although the NFT market is becoming more active as more and more companies are adopting NFTs due to their growing popularity, Platformer argues that gamers and music fans have very different tastes regarding NFTs. As for gamers, there are numerous cases where game-related companies trying to introduce NFT 'burn', and even recently, criticism has flooded the NFT trading platform 'Quartz' introduced by Ubisoft, and it has been 12 years since then. The open world FPS 'STALKER' that a new work will be released will be protested by fans trying to introduce NFT, and Discord will be forced to explain the introduction of NFT, and it is popular. FPS Valorant's official Twitter posted an illustration of 'the company's character watching NFT at the museum' and explained that 'I did not know NFT', 'Game related companies are trying to introduce NFT The flow of '/ hinting, and withdrawing / apologizing in response to user backlash' has become one template.

Although the introduction of NFT to the latest popular open world 'STALKER 2' is announced, it will be sent off due to the fierce protest of fans --GIGAZINE Discord hints at the introduction of NFT and it burns, and the founder explains that 'there is no plan' --GIGAZINE On the other hand, when it comes to music, John Legend , a man in the R & B world known for having achieved the four crowns of the Academy Award, Emmy Award, Grammy Award, and Tony Award called ' EGOT ', will be on February 2, 2022. In collaboration with Twitch co-founder Kevin Lynn and Taiwanese flat-rate music distribution service KKBOX CEO Chris Lin, a new NFT trading platform ' Our Song ' has been launched, but it is generally favorable. There are many reactions.

Excited to be a part of this! @OurSong allows artists of all levels to connect and monetize in the NFT space. Https://t.co/KrU5yhqvFZ

In addition, Anschutz Entertainment Group , the world's second-largest live promoter, announced that it will hold an auction on NFTs including some types that can be exchanged for physical items such as posters and photo books, but negative comments Is only a few compared to game-related, and the Platformer argues that 'the majority of reactions are somewhere between indifference and enthusiasm.'

・ Game-related NFTs are basically unrelated to the game itself, not to the fun of the game.
・ Since the artist himself receives most of the purchase cost of music-related NFTs, the act of purchasing NFTs leads to the support of artists, but game developers are basically large companies and have poor relationships with fans, and NFTs. At the time of introduction, I don't even lie that 'sales are good for artists'.
・ NFTs in music are basically optional, and you can enjoy the music itself whether you buy it or not, but NFTs in games are linked to the game itself, and there are cases where NFTs themselves are associated with in-game elements. For.

In fact, the game ' Axie Infinity ' that allows you to buy and sell game characters as NFTs and convert them into real-world currencies has also appeared, and it is thought that the number of works related to the elements that are making NFTs will increase in the future. Regarding this, Platformer said, 'Cryptocurrency-related projects are making cryptocurrencies buy, raising the price of the cryptocurrencies, and eventually encouraging holders to sell at high prices,' he said in a critical view. I am.