Netflix raises all plans in North America and spreads to Japan We have increased the prices of all plans offered by Netflix in the US and Canada. As a result, the monthly fee of the standard plan that supports simultaneous viewing on multiple devices and full HD image quality has been raised by $ 1.5 (about 170 yen) to $ 15.49 (about 1770 yen), a premium that also supports playback with 4K image quality. The monthly fee for the plan has been increased by $ 2 (about 230 yen) to $ 19.99 (about 2290 yen). The increase in Netflix's monthly fee will be reflected immediately to new users, but it seems that it will be gradually reflected to existing users. According to Netflix, users will be notified by email 30 days before the price increase is implemented. 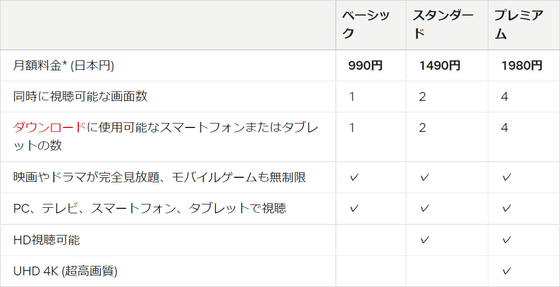 Of all Netflix users, the North American region has the highest number of users, at 74.02 million as of September 2021, which accounts for 35% of the total. For Netflix, raising prices in North America is 'a quick and easy way to earn a lot of money,' said The Verge, an overseas media outlet. Netflix is competing with similar services such as Disney + and HBO Max, and is spending a lot of money on its own content to differentiate it, so it seems that the purpose is to secure that money.

A Netflix spokeswoman told Reuters, 'We're updating prices so we can continue to offer a variety of high-quality entertainment options.' 'As always, members have a price that fits their budget. We offer a variety of plans so you can choose. '