Twitter may be close to launching Super Follows, as new research shows what it could look like --The Verge
https://www.theverge.com/2021/6/6/22521555/twitter-super-follows-new-research-jane-wong-subscription

'Super Follow' allows you to access exclusive posts that are not displayed to regular followers by subscription. Twitter announced SuperFollow at the end of February 2021 as a way for creators to make money directly on the platform. Super Follow will be available for $ 4.99 per month (about 550 yen). 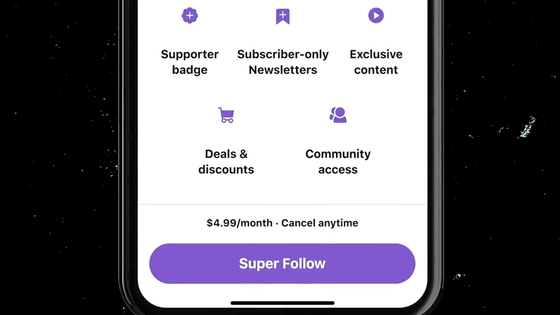 App developer Jane Manchun Wong revealed the details of this super follow. He is a person who has revealed functions such as Twitter's ' cancel transmission function ' and ' Twitter Blue' from application analysis.

According to Mr. Wong's analysis, limited posting is possible using Super Follow for 'having 10,000 followers', 'posting at least 25 tweets in the last 30 days', and '18 years old and over'. It is a Twitter user.

notably, “Adult content” and “OnlyFans” are mentioned in the category and platform sections https://t.co/qSEjh0ohm8 pic.twitter.com/yvkzx672V2

In addition, when the overseas media The Verge inquired about the truth of Mr. Wong's analysis result to Twitter, he said that he could not get an answer.

Twitter has implemented a throwing function called 'Tip Jar ', and this Tip Jar does not collect a part of the throwing money as a fee. However, The Verge points out that the Super Follow feature is likely to collect a portion of the sales as a commission.

In addition, Twitter has started 'Twitter Blue' as its own paid service, and is steadily expanding the paid subscription service. 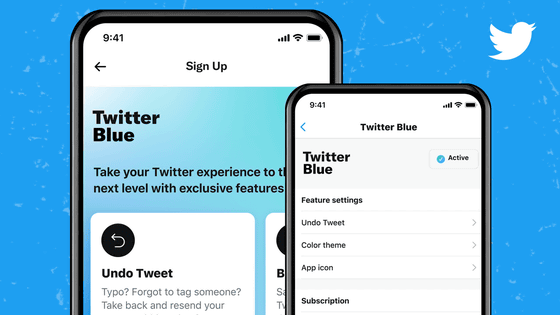