A comprehensive final that the National Security Commission on Artificial Intelligence (NSCAI), chaired by former Google CEO Eric Schmidt , recommends a roadmap to secure America's dominance in AI. We have released a report. In this report, NSCAI points out that AI development in the United States and AI response by government organizations have been delayed.

Two years and many thousands of hours later: the final National Commission on Artificial Intelligence report is here: Please read for where we are and what we need to do. I am so proud of the team and of this work! Https: // t .co / NW7UlPHvv3

NSCAI told President Joe Biden, 'We will more than double the R & D cost of AI and increase it to 32 billion dollars a year by 2026.' 'A broader AI policy 'Establishment of a new organization to manage' 'Relaxation of migration restrictions for talented AI experts' 'Establishment of an educational institution for the purpose of training the digital skills of civil servants' 'Active adoption of new technology in the American intelligence agency' .. In a report, NSCAI also noted that 'America's technological superiority could be lost within the next decade,' and 'calls the world to ban AI-controlled autonomous weapons.' 'It should be stopped.' 'Even if we conclude a treaty, it is unlikely that China and Russia will comply.'

More than 2,500 professionals and business people, including Tesla CEO Elon Musk, DeepMind co-founder Demis Hassabis, and Twitter CEO Jack Dorsey, have said about using AI for autonomous weapons. It was reported that he had signed a pledge that he should not develop autonomous killing weapons.

More than 2,500 people, including Elon Musk, the founder of DeepMind, and prominent AI researchers, have signed a pledge prohibiting the use of AI for 'autonomous murder weapons' --GIGAZINE 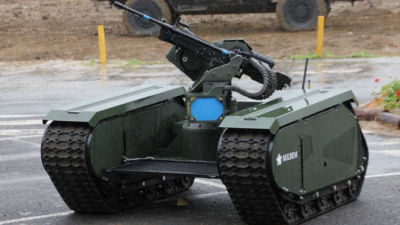 Schmidt's recommendation goes against the trend that 'the development of autonomous weapons using AI should be prohibited.' Professor Toby Walsh, a professor of AI at the University of Sydney, told CNBC, an overseas news media, 'The crisis is closer and more serious. Autonomous weapons must be regulated.'

German AI researcher Samim Wagner said, 'Everyone knows that the adoption of AI weapons is a brutal madness, but think tanks of the US and Chinese governments have said that the development of AI weapons is'advanced. We continue to insist that it is necessary. Humanity should truly discuss the peaceful use of AI, but Pentagon operatives and billionaires like Eric Schmidt think that's exactly what it is. I don't. '

On the other hand, NSCAI is cautious about face recognition technology. 'We are concerned about the Chinese government experimenting with surveillance technology, and we are pleased that American companies are cautious about developing facial recognition software,' said Moore, a member of NSCAI. I am. In addition, NSCAI has called for increased self-sufficiency in computer chips and warned of the dangers of relying on Taiwan's semiconductor foundry TSMC. 'Microelectronics is a necessity for all AI, but the world's most sophisticated chips are no longer manufactured in the United States. The United States needs to reassess the resilience and security implications of its semiconductor supply chain. There is. '