How is the night sky seen from Mars different from the Earth? idea of migrating to Mars has become a reality, but life on Mars is very different from life on Earth in many ways. From the perspective of an amateur astronomer, writer Stuart Atkinson summarizes 'How is the night sky seen from Mars different from the Earth?'

Basically, there are few clouds in the night sky of Mars, and it is a good environment for amateur astronomers to see the stars well, but sometimes sandstorms can last for months. However, the mechanism by which winds and storms occur on Mars is not yet clear, and research is urgently needed.

However, during periods of no sandstorms, the night sky on Mars is as clear as the night sky in the desert on Earth. There is less satellite interference than the Earth, and you can see two moons instead of one. On the other hand, it seems that the twilight state will continue for a long time because the light is scattered by the dust in the air. The dust is also thought to act like a lowland fog on Earth, reducing the visibility and brightness of low-altitude stars.

Also, at sunset on the earth, as the sun sets, the sky swells greatly and the sky bleeds into gold and copper, but in the case of Mars, the sky is dyed blue and purple due to the presence of dust as described above. The closer to sunset, the bluer and smaller the sun becomes. 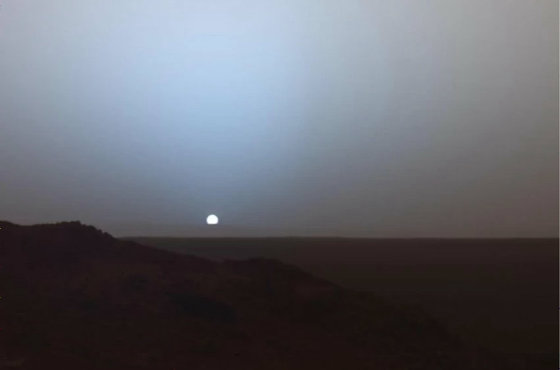 In addition, photographs taken by the Mars rover

Curiosity have revealed that noctilucent clouds are likely to appear in the sky immediately after sunset, and depending on the time of year, the Earth may be seen as a 'night star.' Is possible.

Stars will appear as the night goes on, but since Mars is close to the Earth, it is possible to see the stars seen from the Earth in almost the same state. Since there is almost no parallax, constellations such as Cassiopeia and Orion can be seen in the same way as the Earth.

On the other hand, even if you install a telescope on Mars and look for Polaris, you cannot see it. This is because Mars is centered around

Alpha Cephei, which is not very bright.

Mercury and Venus appear darker than Earth, but Jupiter and Saturn occasionally appear much brighter. Atkinson says that observing these planets will be a lot of fun because Mars, unlike Earth, is not flooded with artificial light and there is no bright moon.

As for the Moon, the Earth's moon, the Moon, revolves relatively slowly, while the Martian Moons , Phobos and Deimos , revolve at a faster rate. The two satellites shine brightly in the night sky and can be captured by a telescope. It is also known that the orbit of the Moon on Mars has a very strange inclination. 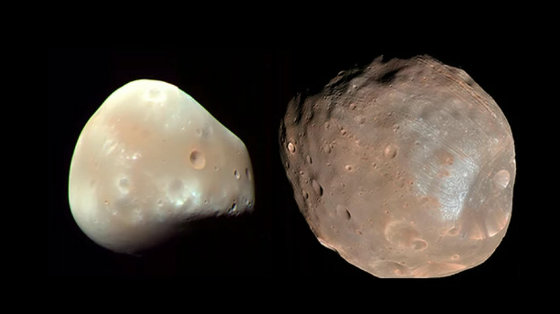 However, when standing on Mars for astronomical observations, spacesuits and helmets make it difficult to get close to the telescope lens, and the visor may distort the field of view, Atkinson said. You also have to fight the cold, as nighttime temperatures can drop to minus tens of degrees. Unlike the earth, there is little artificial light, but since there is light at the base, it is necessary to cycle the rocky mountains to places where the light does not reach.