LCD tablets such as the

iPad Air , Apple Pencil, and Wacom One , which allow you to draw illustrations as if you were drawing on a notebook, have become widespread. but in order to draw the illustrations on the iPad requires a paint software, Minordaimyo 's development of '8bitpaint web' in the paint web application that also supports Apple Pencil slope detection and multi-layers, it has been published for free.

Access 8bit paint web from the above URL and tap 'Start'. 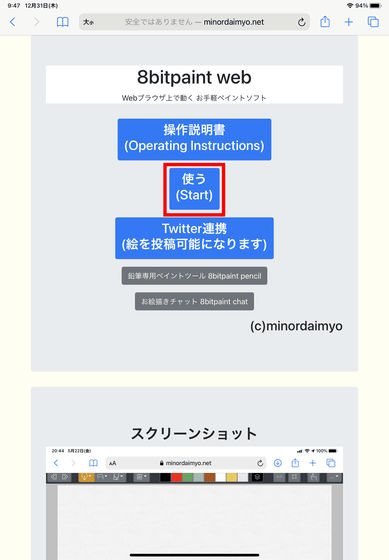 When you start it, it looks like this. Tap the pointing icon on the upper right to activate (orange) to zoom in and out on the white canvas with pinch in and pinch out, and drag with multi-touch to change the display position and angle of the canvas. Also, if you make the pointing icon negative, the canvas will be fixed. The simple operations are summarized in the 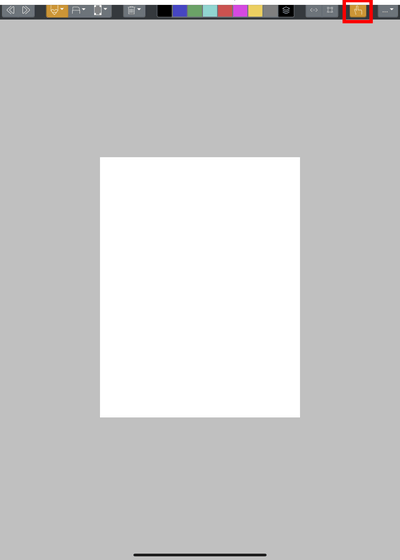 Tap the pencil icon on the upper left of the pen tool. By default, a pen, two grayscale pens, a marker, a pencil, and erase drawing are set. 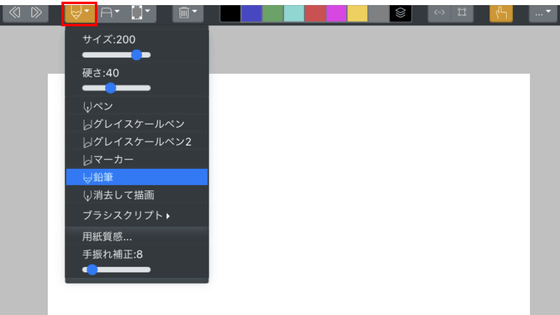 Below is a comparison of writing with two types of pencil, pen, marker, and grayscale. It corresponds to the pen pressure, and you can adjust the shade with the pen pressure just like a real pen. Also, if you set it to a pencil and tilt the pen, it will change to a light and wide line as drawn on the side of the pencil lead according to the angle. You can see in the following movie where you actually wrote lines and characters while changing the pen pressure and angle of Apple Pencil. 8bitpaint web is a web application that runs on the browser, but there is almost no delay in input and there is no sense of discomfort.


You can also use the original brush by loading the brush script you created. The brush script sample file is distributed at the bottom of the official website . There are four erasers: kneaded rubber, eraser, eraser (all), and lasso eraser. The selection tools are as follows. 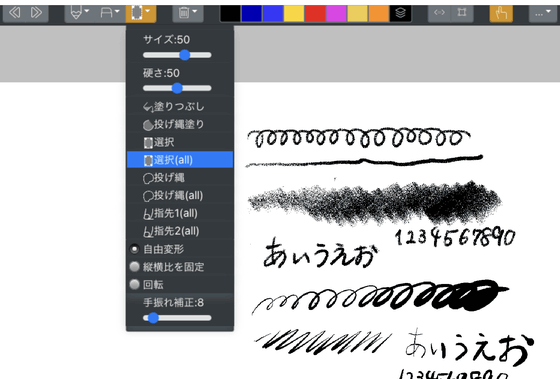 By tapping the trash can icon, you can erase the picture drawn on a layer or canvas basis. 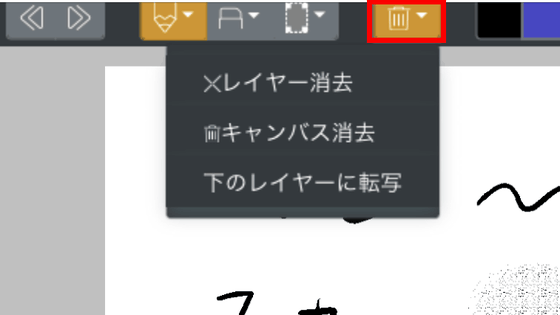 You can flip left and right by tapping the double-headed arrow icon on the upper right. You can also tap the square icon to the right to reset the canvas display position and angle. Tap the layer icon to display the layer list. 8bitpaint web can stack up to 8 layers, and the point is that ' only one line can be used per layer '. In other words, up to 8 colors can be used on the entire canvas. 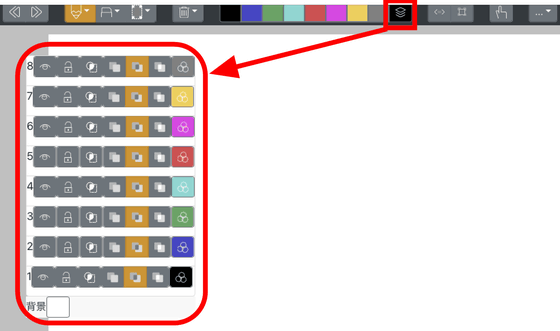 For example, the picture below shows a rabbit face drawn in black on the first layer and a ribbon drawn in blue on the second layer. 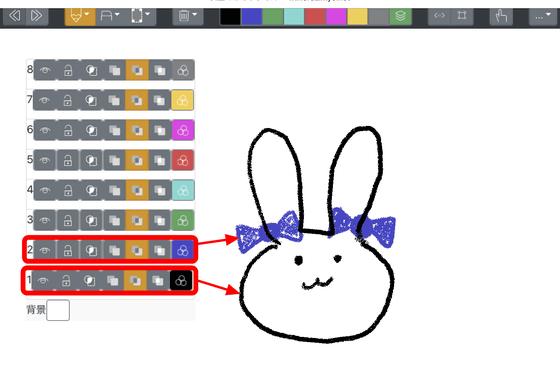 There are three types of layers: normal, multiplication, and addition, and the default is 'multiplication'. When I switched layer 2 to 'normal', the ribbon of layer 2 above layer 1 was displayed above the outline of the rabbit. 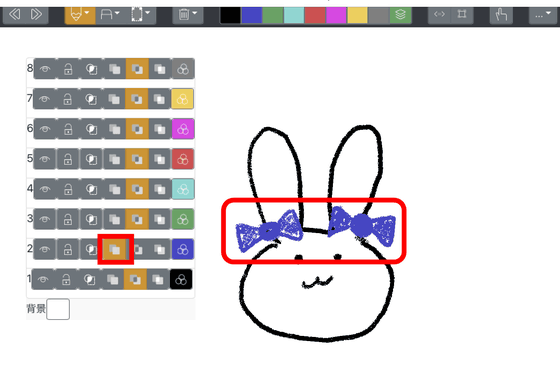 The order of layers can be changed by dragging and dropping the layers. When I moved layer 2 below layer 1, the ribbon appeared below the outline of the rabbit. 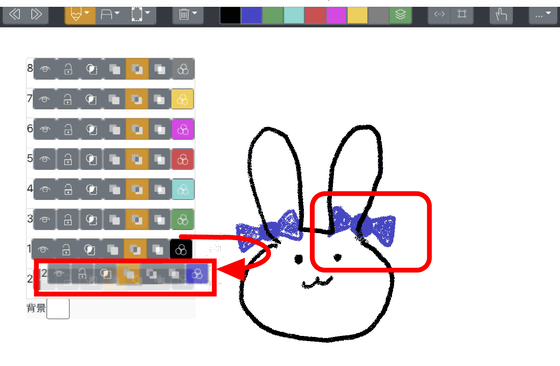 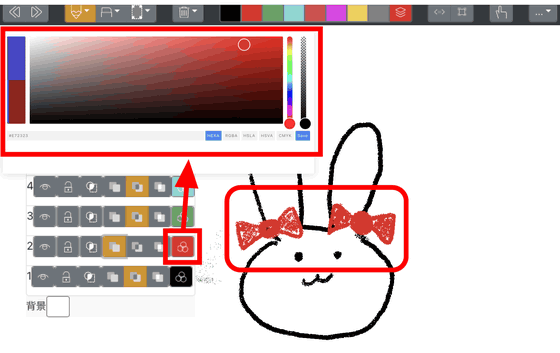 The drawn picture can be saved in PNG format or PSD format. If you select 'Save as PNG' from the menu on the upper left ... You will be asked to download, so select 'Download'. In addition, the saved image is saved in a file instead of an album on the iPad. 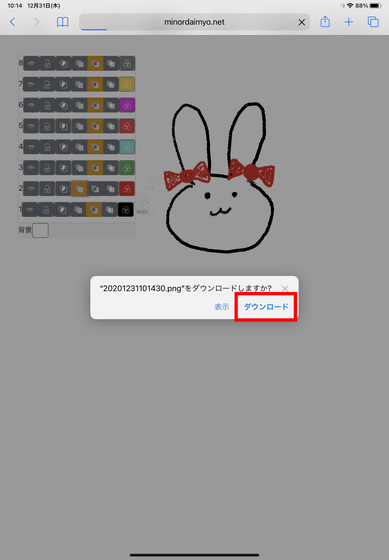 # 8bitpaint '. 8bitpaint is the best web app for casual drawing and sketching, and it's perfect for people who want to draw with an iPad and Apple Pencil, but may not be as expensive as buying an illustration app. 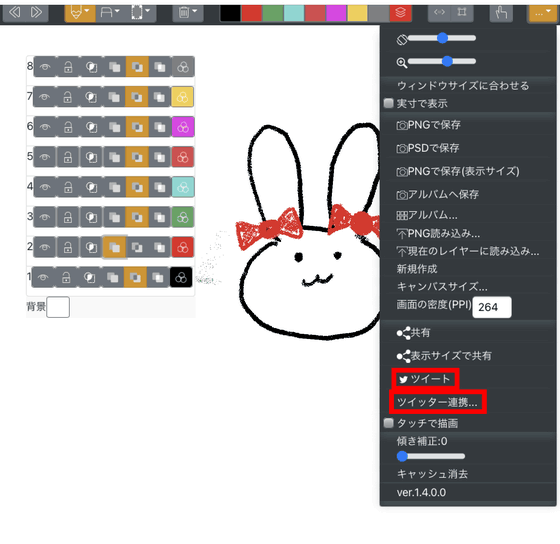