I played 'SUPER MARIO BROS. 35' of Battle Royale x Mario, which keeps running endlessly in the mushroom kingdom until 35 Mario become the last one 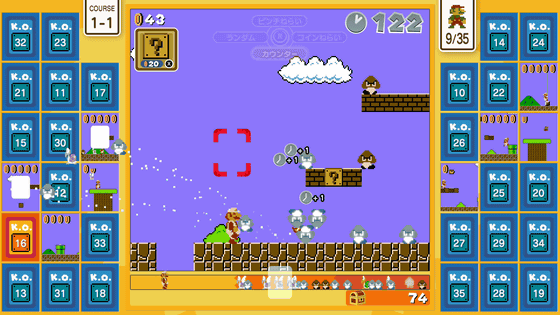 The title ' SUPER MARIO BROS. 35 ' commemorating the 35th anniversary of '

Super Mario Bros. ', the gold standard of side-scrolling 2D action games, was distributed free of charge for Nintendo Switch on October 1, 2020. .. I tried to compete with players all over the world with Mario with a battle royal element that 35 people play Mario at the same time via the Internet and continue to play Mario until it becomes the last one.

You can see what kind of game SUPER MARIO BROS. 35 is by watching the following movie. 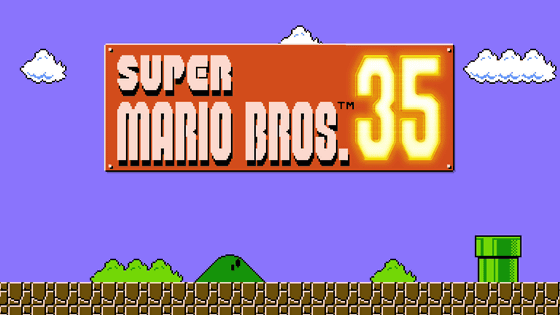 The game modes are '35-player battle', which is a normal online battle mode, 'special battle' where you regularly compete in a special course order and conditions, 'course training' where you can practice your favorite course, and you can check the battle record. 'Status', 'Option' that you can select stick and button arrangement. 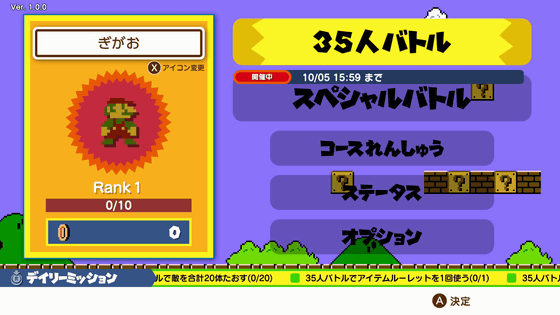 Let's play in '35 battle' mode. Select the desired course and Mario's initial state (far right) and press the A button to complete the preparation. Selectable courses will be released as you play. Also, by spending coins, you can start playing with mushrooms and stars. 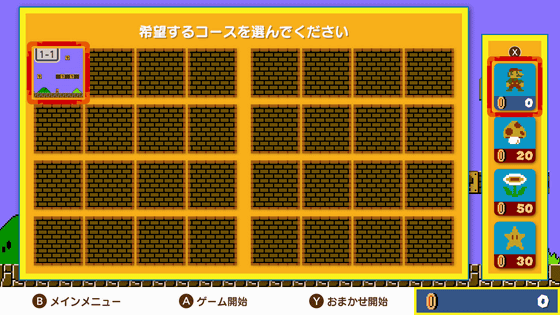 In addition to getting coins in the game, you can also get them by clearing daily missions. 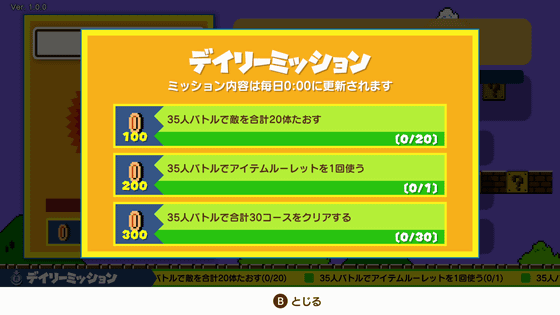 After starting the game, start matching. The frame of 35 people was filled with haste. 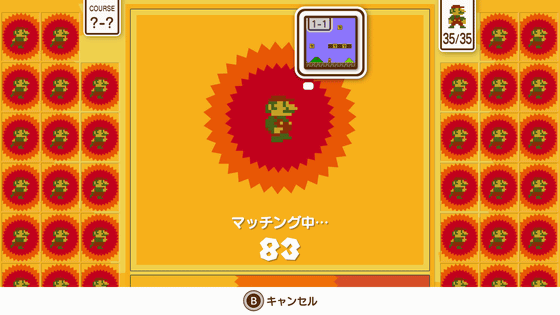 Once all the members are together, the game will start with a time of 35 seconds. Your screen is displayed in the center, and other people's screens are displayed at both ends. 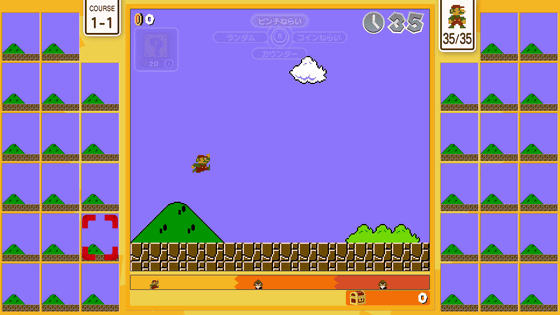 A red line has been drawn from the player (red frame) on the upper left toward your screen. This indicates that the opponent player is aiming at you. 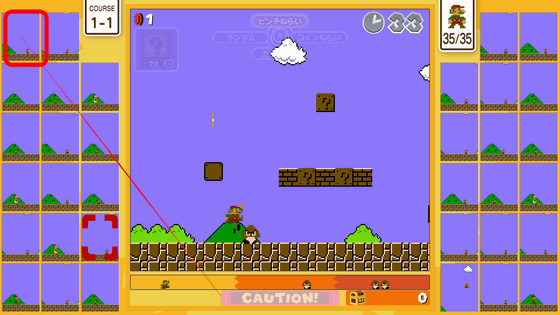 In 'SUPER MARIO BROS. 35', you can send enemies to the target opponent. For example, if you step on Goomba, which was walking right after the start, the remaining time will be added ... 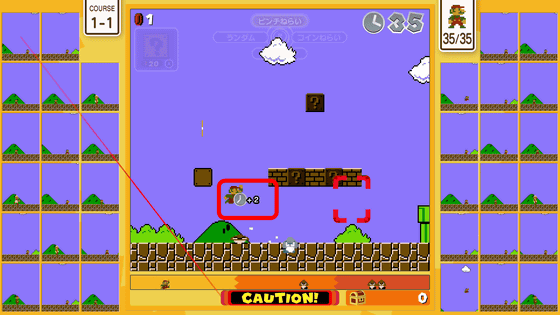 The grayed Goomba soul is sent to players other than yourself. 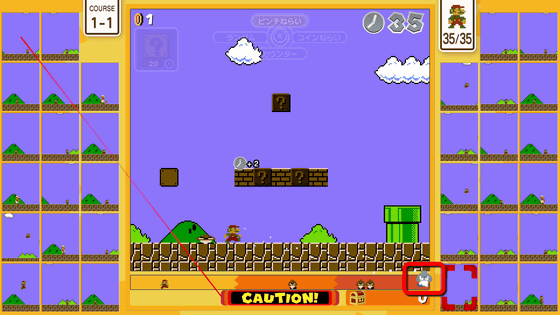 At the bottom of the screen, enemies pressed by the opponent are in a line. The stage of Mario to play is almost the same as the first 'Super Mario Bros.' released in 1985, but as the play heats up by sending enemies from the opponent player, more and more enemies appear on the stage It will increase and the difficulty will increase. 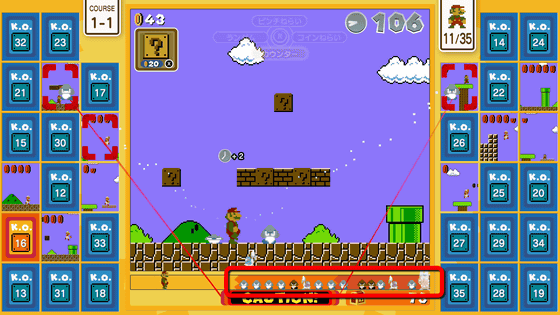 Actually, you can see the place where you played until the last two people in the following movie. You can see how the amount of enemies appearing on the stage increases steadily as the number of opponent players decreases.

'SUPER MARIO BROS. 35' where you can play battle royale by 35 Mario is the last thing that mental power is-YouTube


If you are accustomed to the original 'Super Mario Bros.' to some extent, your body will remember the timing of jumps and dashes, but since the opponent player sends enemies, 'Kuribo in a place where there should not be enemies originally' And Nokonoko are wandering around. ”There may be situations where people who play Mario at the NES will have more trouble. 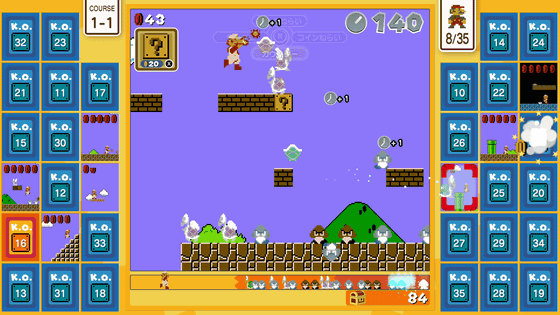 Not only to capture Mario, but also 'pinch aim' to aim at people who are being pushed by enemies, 'coin aim' to aim for people who are collecting a lot of coins, 'counter' to revenge those who are aiming for themselves It is also necessary to have a strategy to proceed while changing strategies such as 'with the right stick.' 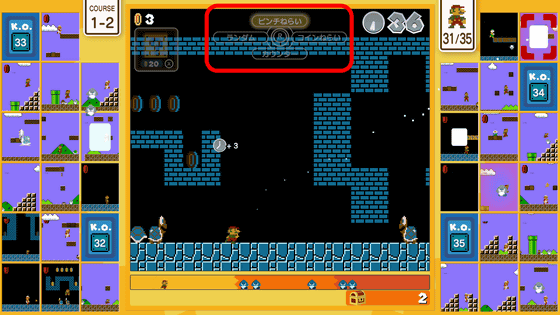 Furthermore, the item that Mario symbolizes is a coin. In the normal Super Mario Bros. series, if you collect 100 coins, the number of remaining machines will increase and you will get a star, but in this 'SUPER MARIO BROS. 35', you can spend 20 coins to play the game. You can turn the item roulette inside and get mushrooms, flowers, stars, and POW blocks. 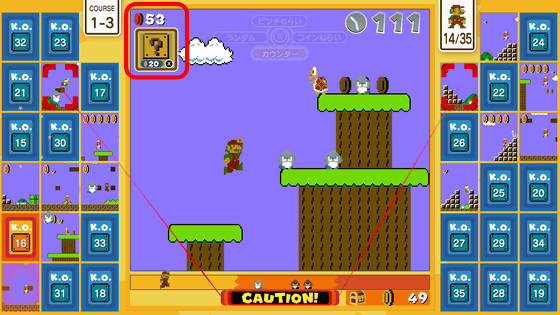 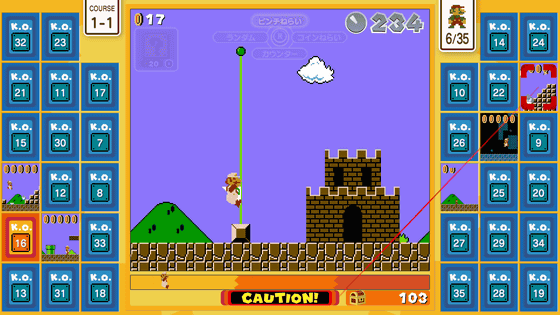 The next stage does not always follow the original stage structure. After clearing 1-1, you can also play 1-4 that Bowser awaits. 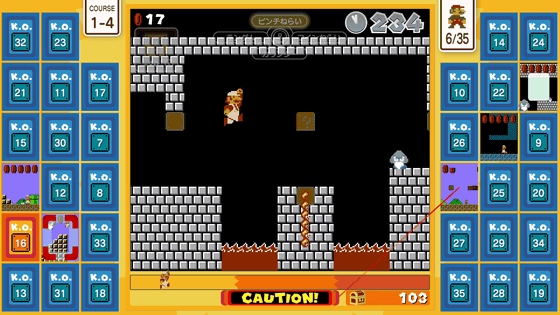 Of course Bowser is also an enemy ... 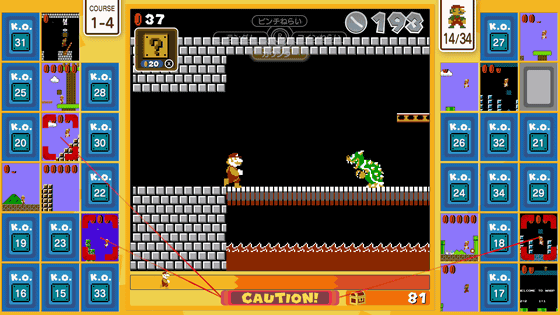 It is also possible to push Bowser against the enemy by defeating it. 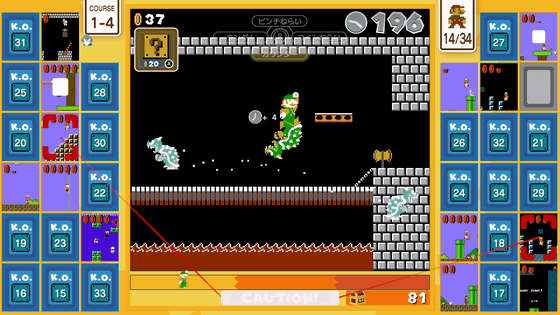 Being able to push Bowser against the enemy means that you can also push Bowser. At the beginning of the stage, Bowser suddenly appeared, and suddenly I was forced to develop a fiercely unpleasant development. 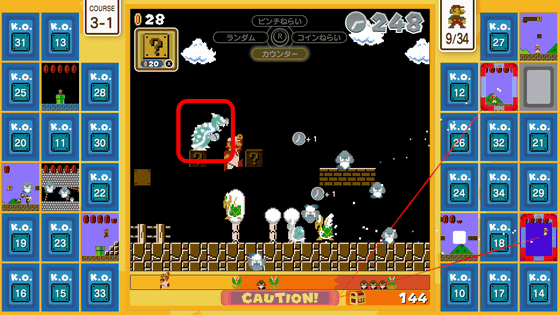 When you actually play it, you need to strategically capture the stage in order to put the very simple 'Super Mario Bros.' into a system called Battle Royale. It is not 'win if you clear early', but 'how to defeat the enemy or take coins and capture the stage while being aware of the attack on the opponent player' is important.

One play was about 6 to 7 minutes, and I sometimes played similar stages many times. The stage is almost the same, but the operation feeling and the position of the block are slightly different from the original Super Mario Bros., and as the number of enemies increases, people who are accustomed to the Mario series will be more likely to make mistakes, so be more careful than experience. It is a game that requires calmness and calmness.