Are tomatoes 'vegetables' or 'fruits'? 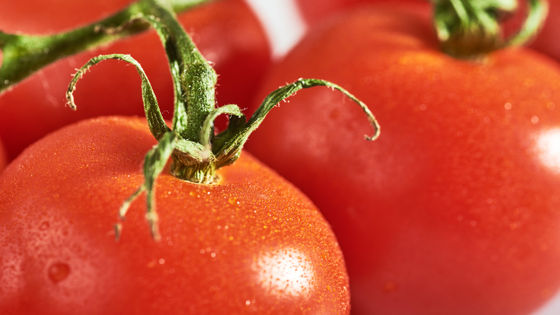 Tomatoes are generally recognized as 'vegetables' in Japan and are placed in the vegetable section of supermarkets. However, since the red fruit of tomato is the part of the

fruit that remains after the flower blooms, there is an opinion that it is botanically 'fruit'. The scientific media ZME Science explains the controversy over 'whether tomatoes are vegetables or fruits' in the United States.

Is the tomato a fruit or a vegetable? Why not both?
https://www.zmescience.com/science/tomato-fruit-or-vegetable-052523/

From a botanical point of view, the fruit is the part of the fruit that has seeds and grows from the flowers. Vegetables, on the other hand, are parts other than fruits, such as roots, leaves, and stems. However, if fruits and vegetables are decided by this definition, not only apples, melons, watermelons, but also cucumbers, green beans, pumpkins, etc. will be classified as fruits. In this taxonomy, 'tomatoes are fruits'. According to the United States Department of Agriculture classification, 'tomatoes are vegetables', but this classification is due to a

court case disputed over the 'Taxation Law on Imported Vegetables' enacted in 1883. The 1883 'Taxation Act on Imported Vegetables' imposes a 10% tax on imported vegetables, while no tax is levied on fruits. John Nicks & Fruit Commission, New York's largest importer of agricultural products, insisted that 'tomatoes are fruits' and 'sought to return tariffs that were unfairly deprived by the classification of tomatoes as vegetables.' I sued Edward Hayden, a New York collector.

The case was contested up to the Supreme Court, but Attorney General Horace Gray said, 'According to the dictionary,'fruits' are'plant seeds', or'plant parts containing seeds', or' It is defined as 'a part of a plant that contains a lot of water, is soft, and covers the seeds.' However, in the general context and the purpose of the customs law, tomatoes are vegetables, 'and' tomatoes are vegetables. ' It was clearly defined.

From the classification of 'tomatoes are vegetables', the classification of 'pizza is vegetables' was born in 2011. The Obama administration at that time subsidized school lunches, but at the same time established a provision to 'include a certain amount of vegetables.' This provision confuses the definition of 'a certain amount of vegetables.' And since the revised budget bill that passed the US Congress in January 2011 stated that 'a dish containing 2 tablespoons of tomato sauce is good as a vegetable', pizza with tomato sauce can now be classified as a vegetable. It was. In Japan, the Ministry of Agriculture, Forestry and Fisheries stipulates that 14 items including tomatoes are 'vegetables that consume a lot and are important for people's lives' according to the Enforcement Ordinance of the Vegetable Production and Shipment Stabilization Law, so tomatoes are officially 'vegetables'. However, on the other hand, regarding the definition of fruits, the Ministry of Agriculture, Forestry and Fisheries states that 'herbaceous plants and woody plants that have been cultivated for more than two years and whose fruits are edible are treated as' fruit trees ''. It clearly states that 'melons, strawberries, watermelons, etc. are treated as vegetables' and states that they have a classification different from the general feeling.

What is a fruit tree: Ministry of Agriculture, Forestry and Fisheries
https://www.maff.go.jp/j/seisan/ryutu/fruits/teigi.html 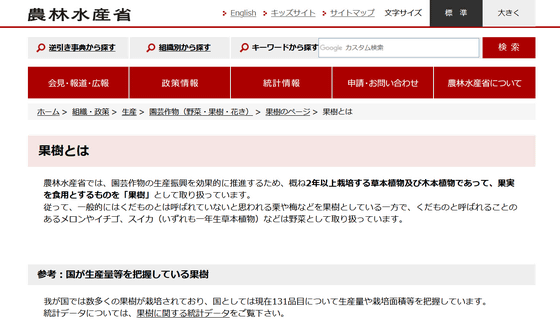