Google smartphones 'Pixel 4' 'Pixel 4 XL' are discontinued, the shortest life in the series It was revealed that Google-made smartphones

'Pixel 4' and 'Pixel 4 XL' released in October 2019 were discontinued. Some stores may still be in stock and can be purchased, but there are no new shipments. 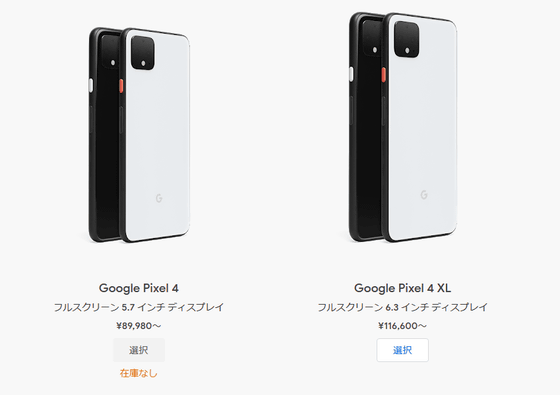 The end of sale was discovered as a result of the news site The Verge inquiring Google after receiving the 'Out of stock' indication in the Google Store. A Google spokeswoman told The Verge, 'The Google Store has sold out Pixel 4 and Pixel 4 XL stock and has discontinued them.' Pixel 4 is 'out of stock' at the time of article creation even in the Google store in Japan.

Google will continue to update software and security for three years from the time it first became available at the Google Store in the United States, and Pixel 4Pixel 4 XL will be updated until October 2022. All Pixel series in the past have been sold for about a year and a half, and the 10 months of 4.4 XL (October 2019 to August 2020) is the shortest ever.

In response to the news that the Pixel 4.4 XL has been discontinued, news site Ars Technica doubts that the motion sensor 'Soli', which was one of the highlights, is a 'questionable goal'. I put off the Pixel 4.4 XL with the subheading 'A peaceful sleep on the worst Pixel smartphone'.

Google kills the Pixel 4, making it the shortest-lived Pixel ever | Ars Technica
https://arstechnica.com/gadgets/2020/08/google-discontinues-the-pixel-4-after-less-than-a-year-of-sales/

The lineup of the Pixel series will be blank temporarily, but the low-priced model 'Pixel 4a' will appear from Thursday, August 20, 2020, two weeks later. In addition, Pixel 5 will be announced in the fall of 2020.

In addition, 9to5Google reports that 'Pixel 5a' is prepared for the first quarter of 2021 based on the leaked internal documents.