What did Microsoft discover as a result of analyzing the changes after the introduction of remote work? 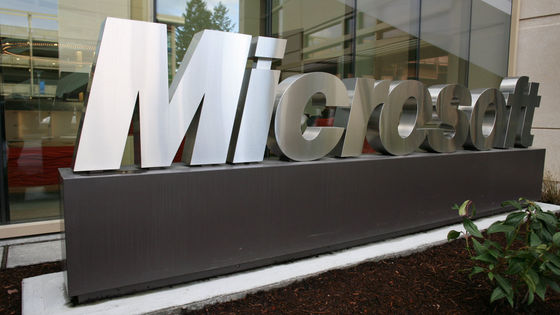 Microsoft has announced the results of its analysis of 'how the work styles of employees of the company have changed due to the remote work introduced as a countermeasure against the new coronavirus infection (COVID-19).'

With COVID-19 raging in the United States, Microsoft introduced a remote work system in early March 2020. Microsoft describes the changes that COVID-19 has brought to work and in the classroom as 'no longer irreversible.'

Microsoft's view that the new coronavirus has permanently changed the way of working and learning, ``I can not return to it anymore''-GIGAZINE Natalie Singer-Velush, marketing communications manager at Microsoft, said the 350 employees involved in Microsoft's service, Modern Workplace Transformation , are collaborating with other workplaces to investigate the impact remote work has had on the workplace. We have collected data about. The collected data included anonymized e-mail, schedule information, and instant message (IM) metadata. As a result, the following four changes have emerged.

◆1: Meeting shortened
What made Singer-Velush especially surprised was the transformation of the way meetings were held. Specifically, meetings that lasted less than 30 minutes increased by 22%, while meetings that lasted more than one hour decreased by 11%. Also, while the time of each meeting decreased, the number of meetings increased, and the total time spent at the meeting increased by 10%. Singer-Velush sees the result as 'because of the lack of well-end meetings near the hallway and coffee machines.'

Singer-Velush added, 'The shorter meeting time was caused by spontaneous changes, not by orders from the upper layers. The results of a survey that analyzes employee sentiment revealed that employees could increase this change. We show that we're evaluating. For future meetings that can last up to an hour, we'll have a tough eye as to whether it's really wise to spend such a long time.'

◆2: Managers had a hard time but had a good effect on their subordinates
According to Singer-Velush, managers were doubling their talk time from 7 hours a week to 14 hours a week in the Chinese workplace, where the transition to remote work took place earlier than the US headquarters. In addition, the number of IM exchanged by managers increased 115%, more than doubling.

In the United States, not only did managers spend more time on coordination, but the working hours of all employees increased, but for employees who have many one-to-one meetings with managers, the increase in working hours is significant. There were few. 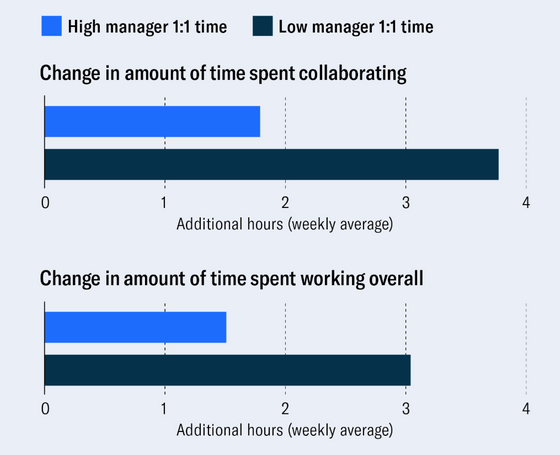 'The results mean managers were protecting their subordinates from the negative side of remote work by helping them prioritize and save time,' Singer-Velush said. .. 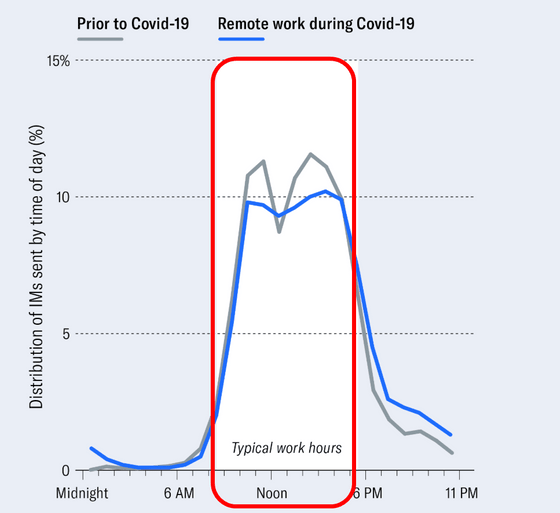 About this result, Singer-Velush said, 'Before the pandemic, IM exchanges decreased by 25% due to the lunch break, but now it is only about 10%. On the other hand, IM from 18:00 to 24:00. Increased by 52%, and the number of employees with less than 10 minutes of collaborative work on weekends tripled, which may not seem like a big deal, It's a change in work culture that was neither intended nor desired.'

◆ 4: The connection between employees was not broken
Singer-Velush predicted that the remote work would significantly reduce the employee network, as the work environment and work rhythm of the employees changed. However, when we measured the breadth of human relations of 90,000 Microsoft employees who actually work in the United States, it was said that the human relations of most employees were not shrinking. On the contrary, many employees were expanding their relationships, and were able to interact not only with their own workplace but also with employees in other workplaces.

Some of the interactions Microsoft employees were making while they were working remotely were from having lunch at the same time, to being unique like 'pajamas day' and 'showing pets.' The number of such online exchanges increased by 10% in a month.

Singer-Velush added, ``It's still unclear if our way of working now is forever different than it was before COVID-19 and the introduction of the remote work system. But I'm convinced that learning about these changes is key to an organization's resilience in the coming months and years.”