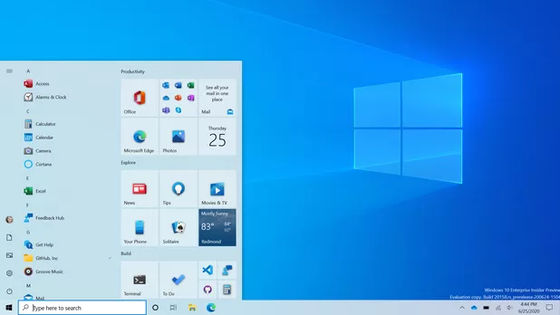 Microsoft has released the latest preview version of Windows 10, ' Windows 10 Insider Preview Build 20161, ' for developers. In Build 20161, the start menu has been revamped, and it has evolved from the traditional tiled design to a more sophisticated design.

Starting with the just-released Windows 10 Insider Preview Build 20161, the Windows 10 start menu is new. Until now, the start menu of Windows 10 was a 'tile design' in which the background of the application icon was displayed in a different color from the UI part of the start menu. However, in the new Windows 10 Start Menu, the background of the app icon is transparent, and Microsoft explains that it has become a Start Menu with a more streamlined design. 'In particular, the standard icons for Windows, such as icons for apps such as Office and Microsoft Edge, and calculators, emails, and calendars that have been redesigned using the Microsoft design system Fluent Design have become more beautiful,' said Microsoft. It was.

You can see at a glance how the start menu of Windows 10 has changed by looking at the GIF image below.

The new start menu in Windows 10 will work even if you turn on the dark theme in the UI. 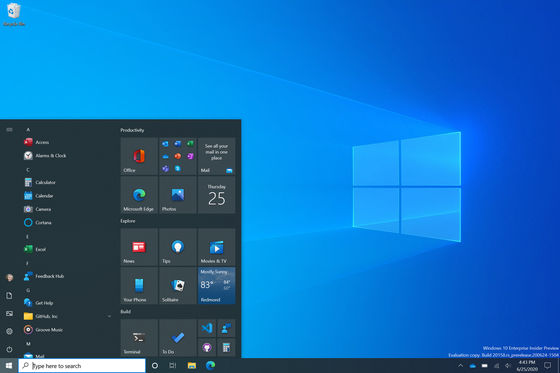 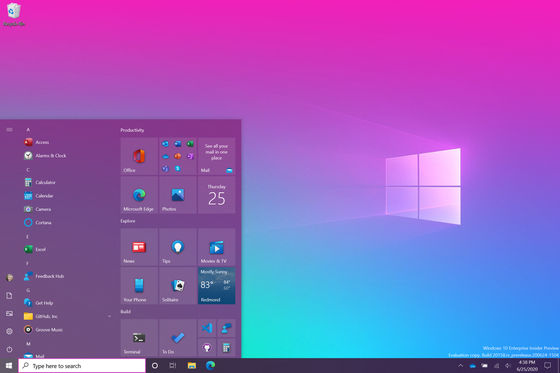 In Windows 10, pressing the 'Alt + Tab' key will bring up a window where you can quickly switch between applications. In Windows 10 Insider Preview Build 20161, each of the tabs opened in Microsoft Edge of the web browser will also be displayed in the application switching window. In addition, it is also possible to set the operation of the 'Alt + Tab' key back to the conventional one, that is, not to display each tab of Microsoft Edge individually.

In addition, Microsoft has arranged the taskbar layout to organize the content that users need and to provide a personalized experience to each user so that the user who is using a Windows 10 PC for the first time can make the most of the OS. Announced to change for each user.

In addition, Microsoft has updated the version information part of the control panel of Windows 10, improved the experience of 2-in-1 device tablet mode, equipped with a graphing mode in the calculator application, and some other details. We are also making some changes.