The distribution of the new 'Microsoft Edge', which changed the browser engine from Microsoft's original EdgeHTML to an open source project and Chromium base, has started

via Windows Update . However, some users who installed the software reported that Edge imported data from other browsers such as Firefox, even though they did not allow it.

Are we going to get treated to spam popups advertising Edge and having it duplicate our data from Firefox without asking every time Microsoft decides to update it from now on?: Windows10
https://www.reddit.com/r/Windows10/comments/hct0mj/are_we_going_to_get_treated_to_spam_popups/ 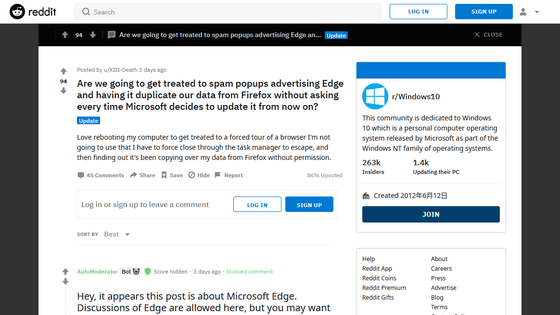 The new 'Microsoft Edge' adopts Chromium as a browser engine for the purpose of improving compatibility and reducing the burden on developers, it was officially released in January 2020, and it will be introduced by Windows Update from June 2020. It has started.

Chromium version ``Microsoft Edge'' is officially released, it looks like this when actually used-GIGAZINE Reddit user XIII-Death reported this suspicious behavior of Edge. I did not intend to use Edge, so I escaped the installation process via Task Manager. However, because there was a notification that I was signed in to Edge after that, when I started Edge to just sign out, I found that Firefox data was imported.

Even in the editorial department of GIGAZINE, on a machine with ``Firefox is used but Chrome is not used'' environment, a new Edge starts after restarting Windows 10 and a dialog asking about data import from another browser opened, but already In Edge, which appears behind the wizard dialog, the data has been imported, and if you select 'Do not import', the previously imported favorites will be deleted. The Edge that was restarted was empty, and the data imported from Firefox did not remain, but if you forcibly terminate this installation work, the data temporarily imported by Edge from other browsers may remain. I feel like getting it.

Please note that the new Edge does not carry over the favorites from the conventional Edge, and has disappeared. There was no dialog as to whether to take over.

The reason for the behavior that seems to be importing data before getting user permission is unknown.

Microsoft distributes a toolkit that disables this automatic distribution of Microsoft Edge. Also, even if it is installed, Edge can be removed by deleting the corresponding update program.

・Additional notes
I also updated Edge on another PC in the editorial department, left via the task manager during the installation tour, and checked Edge's favorites, but no data was imported. 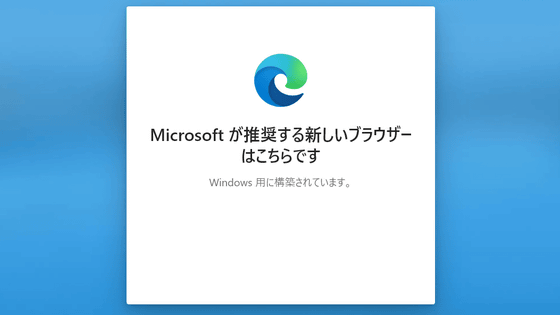 This PC also had many sites bookmarked in Firefox, but it does not seem to be 'imported always.'