Facebook starts labeling 'Media under the control of other countries' Facebook has announced that it will label 'media in part or all under state control' from the second half of 2020. Behind it is the aim of protecting voters' discussions from the influence of other countries for the US presidential election held in November 2020.

Below is a sample label for 'Media under National Control' that Facebook will start in the summer of 2020. 'Russia state-controlled media' is displayed at the bottom of the Facebook page on the left. You can also read the transparency report on the right from the link in this display. Similarly on a PC, the transparency report will be displayed in a prominent position. 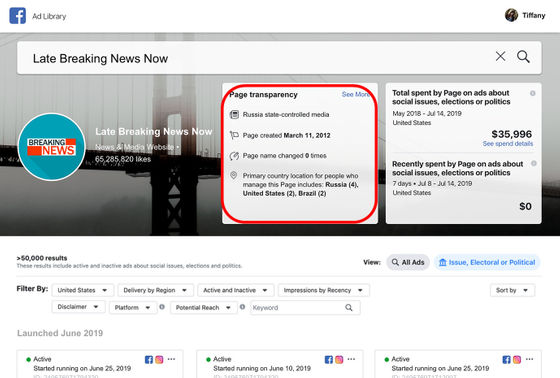 According to the U.S. News Bureau, CNBC, these labels are attached to Russian media such as Russia Today , Sputnik , Chinese CCTV , Xinhua, etc., but the targeted news media are not fixed and are added or excluded as appropriate. It is said that.

In addition, Facebook said in a statement, 'In order to ensure transparency for content from these media as well, we plan to label ads from these media from the second half of 2020. Also, November 2020. toward in the American election, to protect the discussion from a wide variety of influence of the public from abroad, it was said to block ads from these media in the United States 'to the prospect of the end of the summer.

CNBC commented on the reason why Facebook decided to take action this time, which expressed the idea that ' private companies should not be'decisors of truth' ', said 'This decision will manage Facebook's post by Trump The refusal to do so comes from the storm of criticism from employees and partners.”