The computing speed of 'Folding @ home', which advances the analysis of new coronaviruses using PCs all over the world, has reached the total performance of all the top 500 supercomputers in the world Folding @ home ' is a project to analyze the three-dimensional structure of proteins by distributed computing that aggregates the computing power of familiar machines such as PCs, game consoles, and smartphones in homes around the world, and analyzes the new coronavirus. Is also exerting its power. As a result of the attention paid to Folding @ home by the worldwide new coronavirus pandemic, the processing power of Folding @ home has become superior to the sum of all supercomputers in the world ranking TOP500 .

With our collective power, we are now at ~ 2.4 exaFLOPS (faster than the top 500 supercomputers combined)! We complement supercomputers like IBM Summit, which runs short calculations using 1000s of GPUs at once, by spreading longer calculations around the world in smaller chunks ! pic.twitter.com/fdUaXOcdFJ

So What Is Protein Folding, Anyway? | Hackaday
https://hackaday.com/2020/04/14/so-what-is-protein-folding-anyway/

Below is a graph comparing the computing power of Folding @ home as of April 14, 2020 with other supercomputers, and the vertical axis shows the processing speed. Folding @ home is about to reach 2.4 exaFLOPS , which is 15 times faster than IBM Summit , which boasts the world's fastest processing speed, and this speed is faster than adding the computing power of the TOP500 supercomputer. 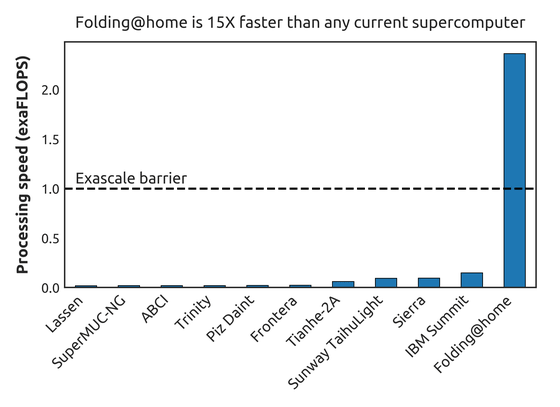 PS3 version Folding @ home result of interest gathered by the emergence of, PS3 users to participate in the Folding @ home has reached 100 million people, processing speed distributed computing first-ever 1 PFLOPS to reach it was. However, Sony discontinued the PS3 version of Folding @ home in 2012, and users on other platforms were gradually separated, so in January 2020, the total number of users fell below 30,000.

However, a turning point will come in February 2020. The total number of Folding @ home users jumped from 30,000 to 400,000 in March. In April it reached an additional 700,000. In modern times, the specifications of users' PCs have improved considerably, so at the moment the processing speed on the user side is too fast and the server side is overloaded.

This situation was created by the new coronavirus. Folding @ home has contributed 233 research papers , including important researches such as protein structure analysis of antibiotic resistant bacteria and Ebola virus. Of course, such Folding @ home will be used for analysis of the new coronavirus, and Nvidia officially tweeted, 'Let's use GPU computing power to fight COVID-19', so attention is gathered. It was.

Us And Our Join Friends At AttoOfficialPCMR In Supporting Folding Atto Home And Donating Unused GPU Computing Power To Fight Against COVID-19! 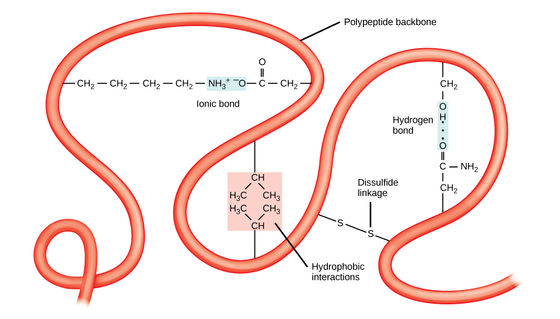 Several projects are underway to analyze the new coronavirus using the computing power of Folding @ home. On April 13, 2020, a study on the replication-competent protein ' RNA-dependent RNA polymerase (RdRp) ' within the novel coronavirus was announced . Most of the vaccines currently under development target the surface antigen of the new coronavirus, but this surface antigen is also likely to evolve to have drug resistance by mutation. It is pointed out that the developed vaccine will become useless. ' However, according to the research team, although RdRp is difficult to study because it is located inside the virus, it is very difficult to mutate, so it is a promising drug target. 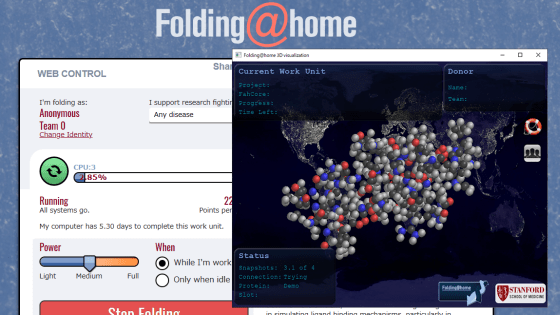