How will the new coronavirus change the digital advertising market? Many companies have stopped economic activity to prevent the spread of the new coronavirus infection (COVID-19), but investor Mir blogs about how much the effect is expected to be in the digital advertising industry It is summarized in.

Next, Mr. Mühl mentions the previous recession phase around 2008, saying that during this period Google was growing because the digital advertising market was expanding. In 2010 there was a big difference between digital media viewing time and advertising spending share, but in 2018 research by Venture Capital Bond found that the difference has almost disappeared. 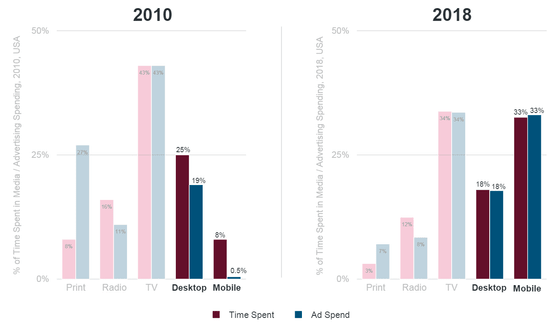 Digital ads are designed so that an auction occurs as soon as a user opens a page, and the highest-priced advertiser can place ads.If an advertiser stops budgeting, ads can be placed immediately. Because it stops, the effect appears more quickly than other advertising media. Of course, during the economic recovery phase, there is a characteristic that advertising expenses will return quickly, but this depends largely on how the economy will recover.

(PDF) survey of the Internet advertising industry group IAB , advertising expenses spent in March and April are estimated to be 38% lower than the annual plan and an estimated 28% in May and June. The prospect. 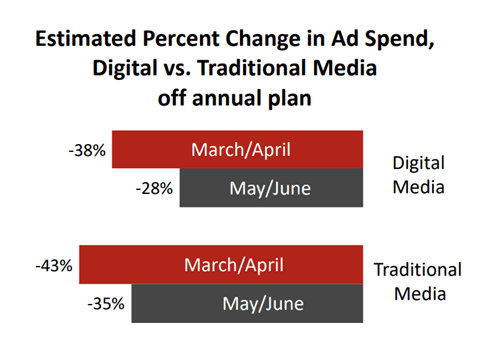 However, the “yearly plan” of this comparison source was expected to increase by about 15% from the previous year, so the actual year-on-year decrease was about 29% in March and April, and in May and June That's about a 17% drop. Nevertheless, based on these results, the digital advertising industry in the second quarter of 2020 will lose about 20% in revenue.

Such movements have already been reported on several sites.For example, in the `` The Online Ad Revenue Index '' which collectively measures the revenue results of various sites, at the end of March the revenue decreased by about 40% compared to the previous year That it is. 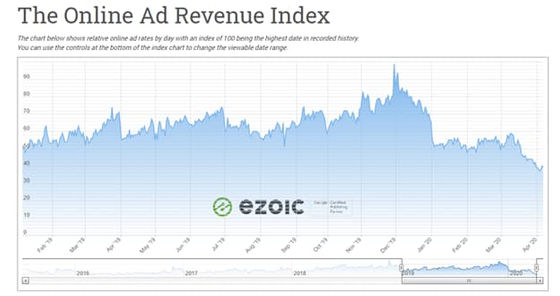 (PDF) Twitter , Facebook , Pinterest and other companies have reported that revenue is expected to decrease, and there have been reports that Amazon and Walmart have stopped trading with digital media .

The situation is worsening, but according to Bloomberg's consensus , Google, Facebook and The Trade Desk, where advertising accounts for most of the sales, are expected to grow in the second quarter on a par with the previous year, and for the full year. Mule noted that the consensus was overly optimistic, noting that it was not investment advice.