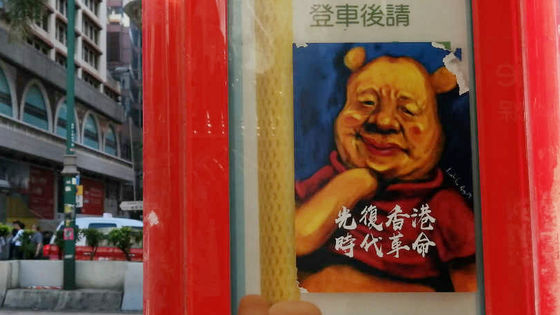 'Winnie the Pooh' everyone but is a popular character to know, would carry a political meaning from the look-alike thing to Xi Jinping Jintao of China, to undergo the treatment ridiculous in Hong Kong demo of 2019 became.

Takuya Sudo @ Chariderman, who traveled around the world on a bicycle, visited the site in November 2019 to learn about the current situation in Hong Kong where democratization demonstrations took place . Opposition to China's top is something that we, as Japanese people, cannot be indifferent to.

◆ How Xi became “Pooh”
Opportunity, in the mid-summit meeting the US in June 2013, with two shots to walk side by side President Obama and Xi Jinping Jintao, posting two net figure was likened to Winnie the Pooh and tiger Tigger is the topic It was. From that point, Pooh unfortunately took on a political character, and has been censored on social media in China. 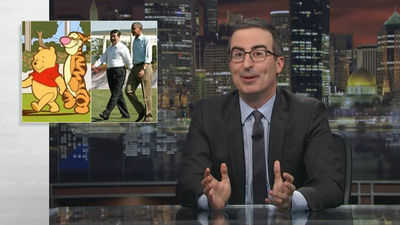 The towels on the Hong Kong stalls are ordinary Pooh. An illustration of Winnie the Pooh at a bus stop. Winnie the Pooh hanging on the road. With the word 'death'. ◆ Xi Jinping Jintao
Not only Pooh but also his own photos are targets of the attack.

The large overpass between Mong Kok and Mong Kok East subway stations was filled with protesters' posters on the walls and pillars. There is a poster at your feet. Large cross mark on the face of Xi Jinping Jintao. However, even in such places, it seemed that there was resistance when stepping on people's faces, and people who walked down the aisles were also avoided.

In Ukraine, where there was an annexation of Crimea and the eastern conflict, anti-Putin goods were sold with strong antipathy to Russia. One of them was toilet paper on which Putin's face was printed. A similar thing happened in Hong Kong.

◆ Cockroach
And, also it stood out also representation to the Xi Jinping Jintao and cockroaches. The graffiti '甴 Kinpei' is also on the shutter of the mainland mobile carrier. The character of 甴 (jaat6) whose sound is close to Xi (jaap6) is assigned. ◆ Support message
It is Xi Jinping Jintao noticeable only criticism in Hong Kong, but I found only support one message. It was a simplified Chinese message used in Mainland China. 'Hoshi Hoshi, Kaori Ryogen' is a term used by Mao Zedong, the father of China's founding, to resist the KMT forces during the civil war and means that even a small force will eventually become a big rebellion. It is a cheering message, but the words used for resistance are urging repression, and I can not do it somehow.

The Chinese government, which seeks to democratize Hong Kong, has shown various opposition to the President. I could not imagine that.