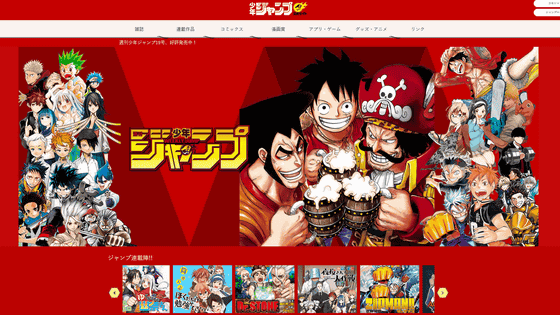 `` Weekly Shonen Jump '' released on April 20, 2020, considering that the employees working for the editorial department of `` Weekly Shonen Jump '' are infected with the new coronavirus, considering the risk of infection of writers and related parties Jump 21 'has been postponed. Along with this, the sale on April 27 will be a merger of 21 and 22. In addition, No. 20 released on April 13 will be released as scheduled.

What is 'cyber-hypochondria' who believes 'I must be sick' and keeps searching the internet for solutions. -GIGAZINE

Immediately after leaving for a two-week trip on a cruise ship, passengers who are told that `` this ship is under renovation work '' are furious-GIGAZINE

What is the design of a leaf-like design often found in ancient architecture? -GIGAZINE

Why losing a dog is harder than losing a friend? -GIGAZINE

If you apply pressure to delete the contents of the article on Wikipedia, the result will attract attention on the contrary-GIGAZINE

I'll put a poster on it tomorrow to come in and out of the renovation business pic.twitter.com/93kkAGuc5P

Take a video from a friend from Italy, one of the toughest countries in the world. pic.twitter.com/AMD6IhZw3F

An acquaintance sent me information about a sermon I wanted to hear no matter what. pic.twitter.com/lZ3WjDwRfH

When you go out, if you wear this together, you can keep a distance of 2m between each other. pic.twitter.com/d1ApgJWYIL

Did you show a real 'bad graph'? pic.twitter.com/hB9xMyf0ie

— Sorry for not understanding the general election and democracy ... (@igoloedy) April 7, 2020

A scholar who started from poetry research could not stand patience when he came across a comment that described the Japanese Prime Minister's speeches as 'Poem.'
Don't misuse the word 'poem'.
There is a more appropriate venerable expression in Japanese, which is 'Negoto'.

'WHO's broken down in China,' Trump tweeted | NHK News

To everyone in Japan,

Let's win this battle with your hands!
Both earthquakes and typhoons have been overcome with the cooperation of Taiwan.
That's why we will win and see you again!
We can win again!
We will meet again! Pic.twitter.com/XLBgn9jIsQ

To re-present the country 'too severe' on the capital suspension request list on the 10th [New Coronavirus]: Asahi Shimbun Digital

'You have to die ...' Non-payment of leave, OK in an emergency? : Asahi Shimbun Digital

The emergency declaration was one week late. Why did the Experts Prioritize 'Economy' over 'Life'? | Bunshun Online

The mask that arrived at the hospital from the government seems to be made of cloth. Saito Kuramochi, director of the Respiratory Medicine Hospital, says.
'The abuse is not going to say, I say fight the new corona to the young doctor in these kind of things. The Prime Minister, I want you to think seriously about.' Pic.twitter.com/F9FSXo6L9m

Emergency Declaration Can Be Closed Within Term | NHK News

Approximately 1,700 foreign trainees in the field of agriculture Newcomer Corona |

Cash payment to small and medium-sized enterprises and sole proprietors and press conference of the Prime Minister (Shoko Egawa)-Individuals-Yahoo! News

I made Nippon Ham's 'curry omurice as it is' and ate it. All you need is two eggs and a microwave (and ketchup). Is that so good? When I thought, a surprising object came out of the bag and Nippon Ham and Good Job. Is delicious. pic.twitter.com/32F8wfAyKc

Here is the current situation of Shinagawa Station the day after the emergency declaration was issued. pic.twitter.com/DHl7aQUBbZ

Busta Shinjuku, in this time zone that is always busy, this smallness is truly amazing pic.twitter.com/b1nXIp8vxe

A poster stuck out at a shop in Kitakyushu. I felt that you were speaking for your deep distress pic.twitter.com/VjQxzsUZz5

Daifuku who escaped to strawberries pic.twitter.com/rnQZb9pMok

I thought it was a joke, but my brother went to school with serious equipment pic.twitter.com/Lb9D9S0Xe5

A mysterious Japan that I examined on the day of the emergency declaration (April 7, 2020). https://t.co/PheheWPYyY

Here is the background of the recommended video conference for the Internet Geriatrics pic.twitter.com/NqyaASZzoW

A lot of same-sentence posts have been flooding since the emergency declaration at around 7:00, but many of those accounts have already been deleted.
Can't you understand that it's fake in this era or that it's going to happen soon? I feel like I'm going to lose my evaluation soon.
Now is a little bit of writing in katakana. It's a bit embarrassing with Imif pic.twitter.com/cgNDI9FC0k

A mysterious sync phenomenon that is tweeted all at once saying `` I'm terrified Corona, but I heard Abe's voice ''-Togetter

[Notice] Nintendo Switch (including 'Amazing Animal Crossing Set') and Nintendo Switch Lite are not shipped this week except for reservations. We will inform you of the shipping schedule next week.

Boxes with games are piled up to the ceiling pic.twitter.com/bLyxv9cSdj

By using Eva Q's '3EM01_Em20_Master' for BGM, an urgency declaration that increases the sense of urgency (a bit unscrupulous) pic.twitter.com/fxzoLbN0Eq

For about two and a half years, I've really worked really hard, so I'd like to be praised even a little for honest things.

I got a clean copy of the rough drawn in 10 seconds.I was sharpened when I played pic.twitter.com/6Abj5X7RHB

There is a section that believes that the cover of another magazine can be drawn pic.twitter.com/O1dEVFTjvC

— The President of the Association Who Never Wastes NPC's Life (@simodahajime) April 6, 2020

I have to learn the ripples pic.twitter.com/S2OBz67o1T

A girl who was ashamed of eating and was hiding on the stairs every time and eating lunch, but found by a favorite person pic.twitter.com/GfoolWBPjW

The current situation where Kyoko's unreasonableness is adopted pic.twitter.com/S2o4SfFL59

One piece of software called 'Pachi & Suro Winner DS' was 55 yen for Hadov. I bought both because there were two, but suddenly the development that forced the balance table to my daughter whose pupil was muddy was too chaotic and I could not talk. There seems to be a communication function that allows conversation between daughters, and it may be a surprising masterpiece. #Retro consumer lovers pic.twitter.com/gbSdAm7NrE

I've been talking to my daughter for one hour, but there's no sign of content at all and it's getting more and more horror. pic.twitter.com/BAfFmkrBMm

It's amazing that you can make a ryokan while at home! ! ! ! ! ! # Animal Crossing # AnimalClossing # ANCH pic.twitter.com/Cuc5BM0ur8

Stand up again in the world crisis ... pic.twitter.com/kG8ulYtYlu

An anison theory that a leading jazz player unravels with Nana Mizuki's 'COSMIC LOVE'. Although he was moaned by his theory of J-POP, the resolution was completely different when disassembled while actually playing. The way of listening to anison changes. (1/2) pic.twitter.com/IdQ0WjzArK


Voice actor Kotori Kotori, preparing equipment that can be recorded at home-Togetter

Groundworks: Why Evangelion's Copyright Business Continues to Succeed | THE21 Online

On the day of the bottle-Nico Nico Douga

[Reproduction MAD] What should I do about Akari Tsujino who lives on an island like apple? 2-Nico Nico Douga

Although it was such an apple (adjusted version)-Nico Nico Douga

Kopen and the Dark Emperor pic.twitter.com/qWJYcdCQQx

I did not think that it was terrible so far pic.twitter.com/h7UCXzJhg3

Central horse racing will be held without spectators this week and onwards On the 18th, jockeys are not allowed to travel on weekends in principle | Horse Racing News-netkeiba.com