`` Adobe Flash '' developed by Adobe once flourished as a standard for handling rich contents such as movies and games, but Adobe itself announced that it will end development and distribution of Flash Player at the end of 2020 In recent years, its role is ending. Meanwhile, it has been announced that Flash support has finally been completely discontinued in the developer preview program for Safari, a web browser developed by Apple.

After a decade of drama, Apple is ready to kill Flash in Safari once and for all | Ars Technica
https://arstechnica.com/gadgets/2020/01/apple-seems-poised-to-end-adobe-flash-support-in-the-next-safari-release/ 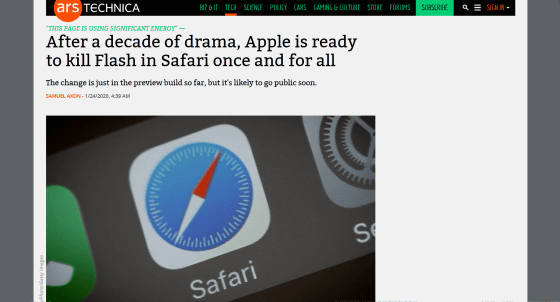 Safari, the default browser for iOS used on the iPhone, has released

With the end of Safari's Flash support, Adobe Flash will no longer be able to install and view Flash content on Safari running on macOS. At the time of article creation, it has been discontinued within the developer preview program, but changes to the preview program will be made publicly available soon.

Apple has been calling for the decommissioning of Flash for many years, and in 2016 Adobe Flash was disabled by default from Safari. 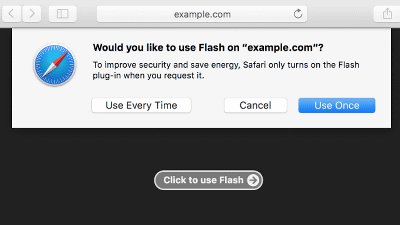 According to news media Ars Technica, 'Flash has been turned off by default for a long time now, and most users will not even notice that Flash has been completely discontinued. The developers have replaced Flash content with other technologies, mainly HTML5 and WebGL . '

'When the iPhone first introduced the mobile version of Safari in 2007, lack of Flash support was one of the main criticisms of the iPhone,' said Ars Technica. Thirteen years ago, people argued that they did not expect to be able to use web features without Flash, stating that the times could be seen.