What kind of food is “Shukumelli Nabe-sushi” that appeared in Matsuya from the store? I've been eating that Since the Embassy members in Georgia

posted how they were eating Matsuya's “ Shukumerli Nabe-don ” on Twitter, Matsuya ’s store-only menu attracted attention as “What is Shukumelli?”. Matsuya's Shukumeri Nabe-sushi is a thick stewed garlic with cheese, chopped chicken, sweet potatoes, `` I'm addicted to those who went to Georgia, '' `` This is completely red wine '' Since impressions appeared one after another, I actually went to Matsuya and ate.

Here is the store that handles Georgian cuisine “Shukumerli” at Matsuya → https://t.co/Use8RG1pZg
* The price varies depending on the store.
* The sales period is scheduled for 12/15. # Shukumeruri pic.twitter.com/97WDrpYDzL

Sukumeruri Nabe-don is available only in some stores, and you can check the stores that handle them here . This time I went to Umeda store in Osaka. There was a standing signboard with the words “Matsuya Sekai Journey

Georgia ” at the store. Sukumerli is a Georgian dish, but Matsuya seems to arrange “white stew pot of“ garlic ”and“ melted cheese ”using chicken thighs”. The pan is served in a fired condition. 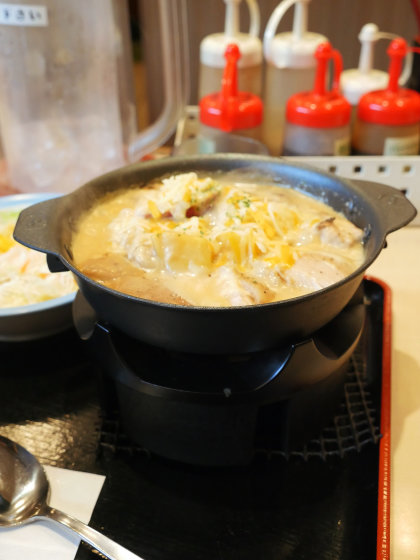 The pan is about this size compared to the 123.8mm iPhone SE. Because the pot is heated, the stew will continue to boil, and the cheese will not cool down and harden. Throughout the course of the meal, it stays in a mellow state. As soon as you eat chicken and stew together, the intense fragrance of garlic and garlic spread in your mouth and the creamy white sauce. Cheese is also very rich, and its unique richness and sourness are indistinguishable from the strength of garlic. 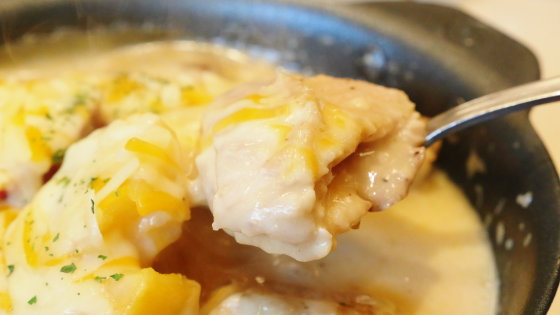 Besides chicken, there were two skinned sweet potatoes. This is also quite large, and it is cut with a gorge. In authentic Georgia, you can eat with bread, but in Matsuya, rice is set. But what about food from the beginning? The compatibility is so good. On the contrary, it is recommended to eat it on rice because it has a strong taste of Sukumerli. 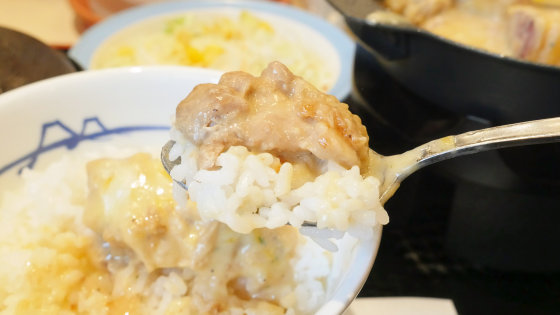 There is a large cut of chicken in the pan, and it is enough to eat. The chicken was baked on the surface and stewed, so the smell and juiciness were felt together. Perhaps because there is a lot of cheese, something like baked cheese has been completed at the bottom of the pot, and this is good. As it is a thick dish with a strong taste overall, it was a good idea to refresh your mouth with fresh vegetables and miso soup. The garlic is intense enough to feel the presence of garlic in the body for a while after you finish eating, so you choose the situation to eat, but it tastes more addictive to understand the comment “There is red wine”. In the Umeda store, the Sukumerli Nabe-an is 730 yen including tax and the raw vegetable set is 790 yen including tax, but the garnish and price vary depending on the store. Since the sales period is such until December 15, 2019, the people to be worried about from here please try to find a dealer nearby.

Report to everyone
Matsuya “Georgian cuisine” “Sukumerli” sold only in some stores.
Thanks to everyone's support, all store sales were decided in mid-January 20202020 ️
And thank you so much for your support ???? # You will understand if you eat # Matsuya Georgia cuisine # Shukmeruri # All store sales confirmed pic.twitter.com/CsHmnr7dQ7