It was discovered on December 3, 2019 that ' Amazon Braket ' that provides a quantum computing experience from Amazon's cloud service '

Amazon is now offering quantum computing as a service with Braket for AWS-The Verge
https://www.theverge.com/2019/12/2/20992602/amazon-is-now-offering-quantum-computing-as-a-service

On October 24, 2019, a paper was published showing that the processor 'Sycamore' developed by Google has demonstrated quantum transcendence . Sycamore is reported to have solved the computational problem of 10,000 years within 3 minutes and 20 seconds with the world's fastest supercomputer.

Google completes a quantum computer that can solve a calculation problem that takes 10,000 years in 3 minutes and 20 seconds-GIGAZINE Not only Google, but also IBM, is developing a commercial quantum computer called ' IBM Q ' that develops quantum computers with computing power that cannot be achieved with conventional computers. Meanwhile, Amazon, which has not been involved in quantum computing competition, suddenly announced the 'Amazon Braket' quantum computing service. The name “Braket” comes from the bracket notation invented by quantum mechanics Paul Dirac .

According to Amazon, the new service allows scientists, researchers, and developers to experience and experiment with quantum computers from multiple developers on a single platform. About Amazon Braket, “The new service gives you a real experience using qubits and quantum circuits. You build and test circuits in a simulated environment and then run a real quantum computer. 'Amazon Braket is fully managed by AWS, and security and encryption are guaranteed at each stage.' Is that of corporate customers is the 'you' referred to here, the development company that provides the service, which is a partner of Amazon D-Wave and IonQ , Rigetti include companies such as.

The user said that 'Access to Amazon Braket with a notebook type interface' is as follows. 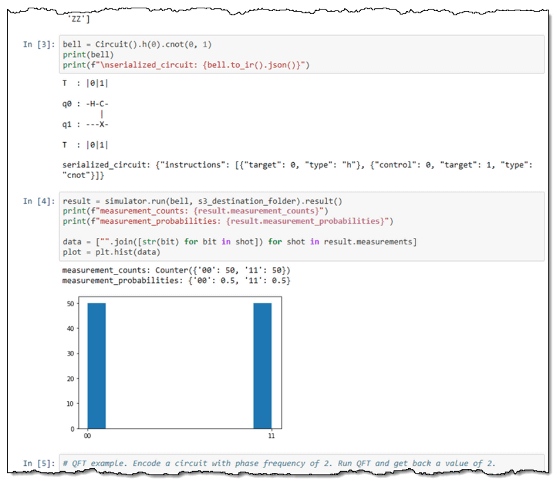 Amazon also announced the establishment of the 'AWS Quantum Computing Center' next to the California Institute of Technology, which gathers quantum computing researchers and engineers to develop both hardware and software. In addition, the Amazon Quantum Solutions Lab, which connects AWS customers to quantum computing experts and consultants, has also been announced.