Amazon Braket enables scientists, researchers, and developers to experience and experiment with quantum computers from multiple developers on a single platform. It is possible to learn about programming methods and application development methods in quantum computers, design quantum algorithms and verify implementation on quantum computers in a unified environment, the system is Amazon's partners D-Wave and IonQ , It is provided by companies such as Rigetti . ``Quantum computing has the potential to lead to new scientific discoveries that will transform energy storage, chemical engineering, drug discovery, financial portfolio optimization, machine learning, and more,'' Amazon said. It will help us overcome challenges,' commented. Amazon Braket does not have to newly learn multiple development environments, and the quantum computer that executes the algorithm is selected from D-Wave's superconducting quantum annealer, ionQ's trap ion processor, Rigetti's superconducting quantum processor. I said that there is an advantage that you can choose freely.

Until now, the use of Amazon Braket was limited to corporate customers, but after August 14, 2020, general users can also use it. However, at the beginning of general availability, it is limited to the Northern Virginia, American California, and AWS areas of Oregon, and will be offered sequentially in other areas.

In addition, a user who actually tried Amazon Braket on Qiita has already appeared. 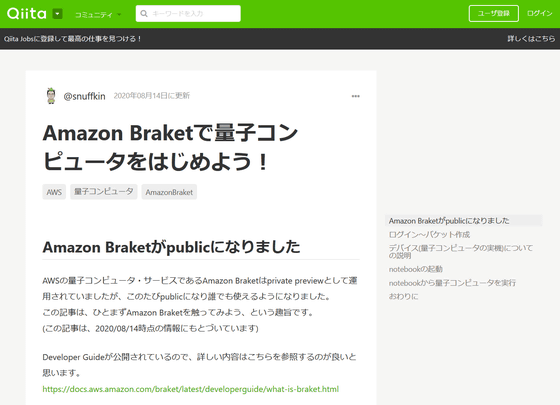