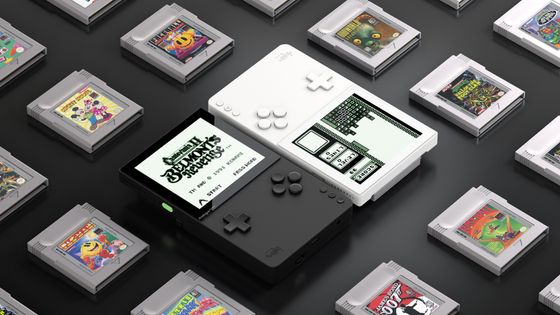 Analogue , known for its “ Retro Receiver for NES ” that connects a family computer (NES) controller wirelessly, has announced a compatible gameboy “ Analogue Pocket ” Analogue Pocket is scheduled to be released in 2020 and is said to be able to play more than 2780 game software released in Game Boy, Game Boy Color and Game Boy Advance.


Like Game Boy, you can play a game by inserting a cassette on the back.


There are two types of color variations, white and black.


The power source is not a dry battery, but a lithium-ion battery that can be charged via USB Type-C connection. Stereo speakers and 3.5mm earphone jack are also provided.


There is a microSD socket on the side.


Development of `` Analogue Dock '' capable of controller connection with HDMI output and Bluetooth is also planned, and if you use a cartridge adapter sold separately although details are unknown at the time of article creation, game gear, Neo Geo pocket color,

Atari Lynx software Will be able to play.