The third-generation “ Amazon Echo Dot with clock ”, equipped with an LED display and capable of displaying clocks, appeared on Wednesday, October 16, 2019, just like “

Amazon Echo ”. I tried to see how much the new Echo Dot with clock, which has a new design and improved sound quality, has evolved compared to the second-generation Echo Dot . A new LED display is installed to display the time and timer. Since Echo Dot with clock is small, it can be placed in a small space such as a bedside. Echo Dot with clock is developed in four colors, sandstone, heather gray, charcoal, and plum, and this time uses sandstone. The size is 43mm x 99mm x 99mm, and the diameter is about the same as the traffic IC card. The height is less than half of the transportation IC card. If you look side by side, you can see that the third generation (left) has rounded corners and is thicker. The serial number is written on the back. There is a power port and 3.5mm audio output on the back. Since it is necessary to connect the power cable to start up, plug the power port ... Setup starts when the plug of the power adapter is plugged into the outlet. At the first startup, the Amazon Alexa app setting mode is automatically set. Setup takes about 50 seconds and is OK if the lamp glows orange. The state of turning on the power is from the following movie.

Install the Amazon Alexa app and tap “Get” when the download is complete.

This completes login. Next, tap the “Devices” tab at the bottom of the screen to link the app with Echo Dot with clock, then tap “+” in the upper right.

Tap to select the network you want to use.

When Echo Dot with clock is connected to Wi-Fi, tap 'Continue'.

The Echo grouping setting screen is displayed, but you can skip it. To use in 'Bedroom', select 'Bedroom' and tap 'Continue'.

When 'Echo Dot is online' is displayed, setup is complete.

◆ I tried playing music
Echo Dot with clock can be connected to the app to play music, but it can also be used as a speaker by connecting to a PC or smartphone via Bluetooth. The third-generation Echo Dot says that the sound is more powerful than the second-generation Echo Dot, so I actually played music and compared the sound quality. The same song is playing at maximum volume, but the third generation seems to be louder.


The sound quality of the third generation Echo that appeared on the same day as Echo Dot with clock can be confirmed in the following movie.


◆ LED display
On the side that is the speaker part, the time is displayed in minutes by LED 7-segment display. 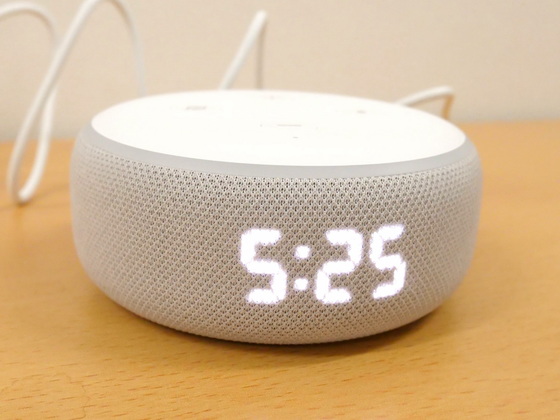 
When the volume of the speaker was adjusted, the volume level was displayed in 0 to 10 steps on the LED part. ◆ Alarm setting with Alexa
You can set an alarm in Alexa and use it like an alarm clock. To set an alarm, first tap the icon at the top left of the screen.

The alarm sounding time can be changed in 1 minute increments. 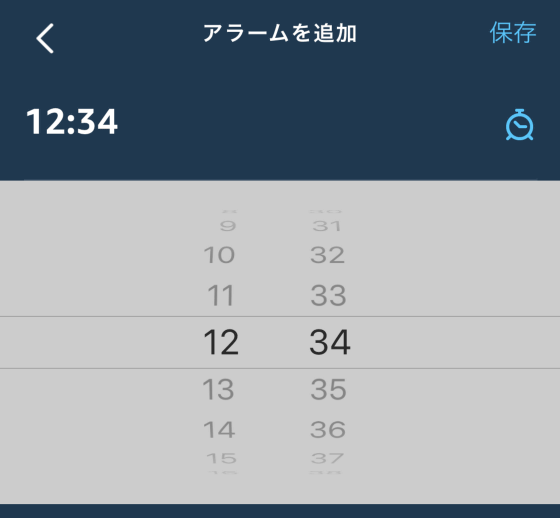 You can select an Echo connected to the app or a smartphone with the app installed as the device that will sound the alarm. 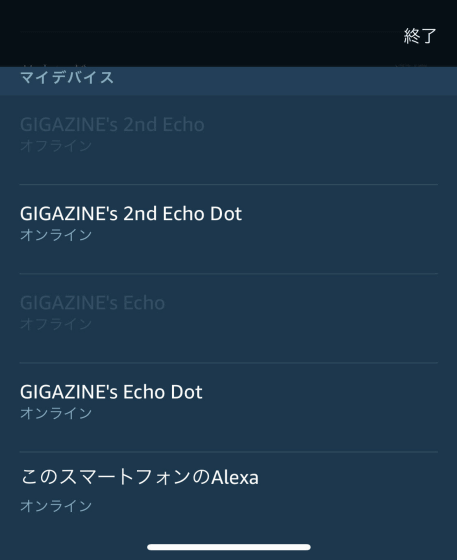 “None”, “Daily”, “Weekly”, “Monday to Friday” and “Every weekend” can be set to repeat. At the time of article creation, settings such as “Monday and Wednesday only” were not possible. 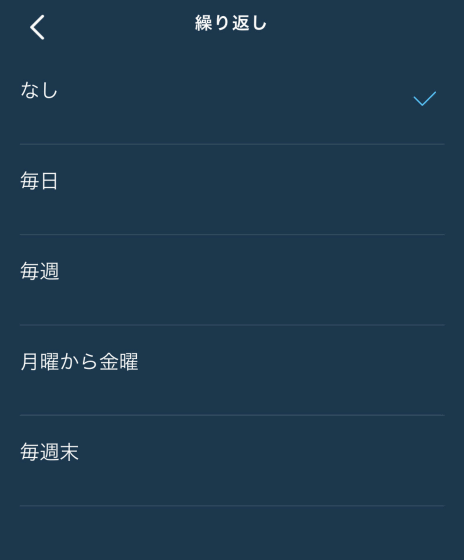 The alarm start date can be specified up to about 8000 years in advance. 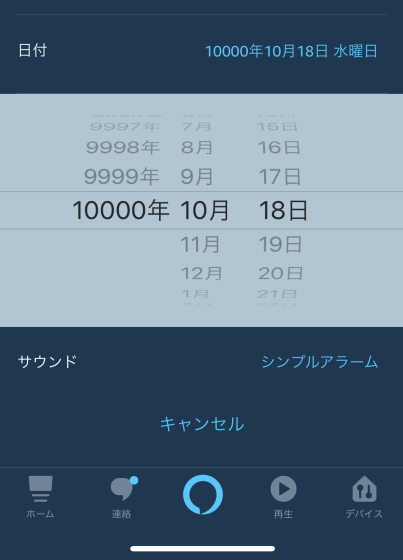 There were more than 20 alarm sounds. You can audition by tapping, and a check mark will appear on the right side. When the check mark is added and the upper left icon is tapped, the change is complete.

Alexa not only sounds an alarm, but can also add a behavior of Alexa after the alarm is stopped by setting a “standard action”. For example, after turning off the alarm, you can set Alexa to turn on the bedroom light and tell you the weather forecast. To set, tap the icon at the top left of the screen to open the menu, then tap 'Standard action'.

The operation after the alarm stops can be specified by tapping the red frame.

You can set the day of the week to run, the time Alexa takes action, and the snooze interval.

The day of the week to be executed is arranged in the order of Sunday, Monday, Tuesday, Wednesday, Thursday, Friday, and Saturday from the left. The black circle is off and the white circle is on. 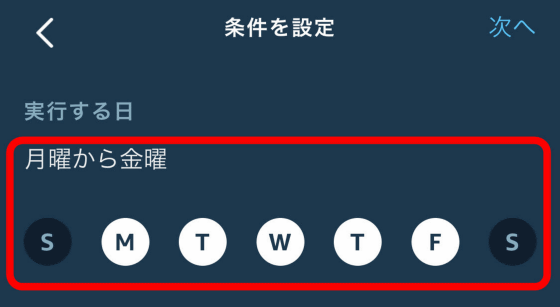 As a method of utilizing the execution period, you can use Alexa to read news and emails every 30 minutes between 9 am and 6 pm. 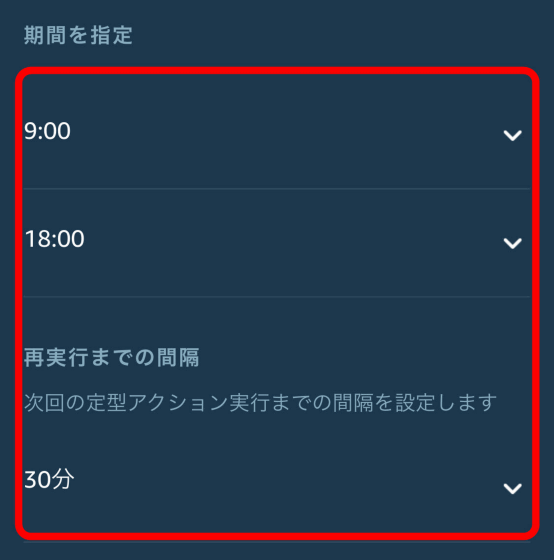 You can also customize Alexa to say any line, so you can say 'Don't sleep twice' after you stop the alarm. To customize, first tap “Alexa Talk”.

Custom allows you to set up Alexa lines up to 250 characters. After entering, tap “Next”. 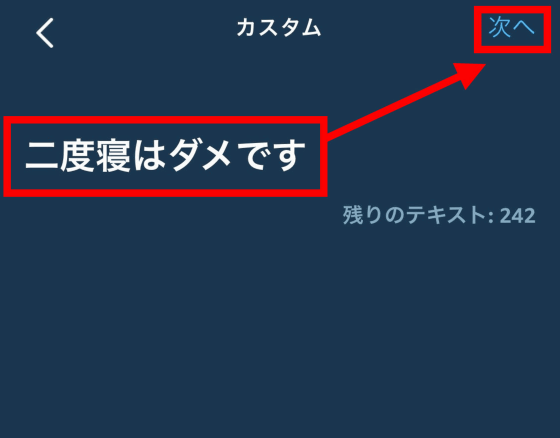 Tap 'Next' to complete the setting

If the alarm is set correctly, the red frame of Echo Dot with clock will light. ◆ Timer setting with Alexa
Speaking of “Alexa, set a timer”, you can set a timer and count up to 24 hours. Since there is a clock display, you can check the remaining time visually. You can check how you actually used it in the following movie.


Echo Dot has a strong image of music playback and cooperation with smart home appliances, but it has evolved into a gadget that seems to improve the quality of daily life by adding a time display and strengthening the role as a clock was doing. It's a bit unfortunate that you can't carry it anywhere like a wireless device because it's essential to have a power cable connection, but the price is reasonable compared to Echo and it doesn't take place, so you can get several for bedrooms, living rooms and kitchens It may be good to leave.

Amazon Echo Dot with clock (3rd generation) can be purchased at Amazon.co.jp for 6980 yen at the time of article creation. Amazon Echo Dot (3rd generation) without a clock display can be purchased at Amazon.co.jp for 5980 yen.