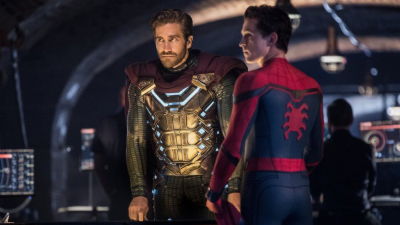 The latest trailer of ' Spider-Man: Far From Home ', where Spider-Man fights on school trips, has been released. It is a trailer that goes into the story quite well, as the call to '

Avengers: End game 's spoilers so those who haven't seen it don't see the trailer!' Is being introduced at the beginning.


Before the trailer, Peter Holland's role in Tom Holland called: 'If you haven't seen the Avengers / End Games, don't look at it! It contains important spoils.' As it is a call from Holland that is famous for 'immediate spoiling', it can be said that 'it is considerable spoiling ...'.

Beyond the eyes of Peter Parker 'Remember him wherever you go' ...

'I am too,' said Happy Hogan (play: John Favreau)

'Tony has put everything on you'

A spiderman who beats the bad guys in the city.

It is a spider man who is teased by the police who rushed to the scene, 'Is it the intention of a new iron man?'

'No, I'm just working on your behalf,' joked.

'We will clean up after all, I am summer vacation from now on!'

It is a spiderman who is floated because of that ...

'I'm going to talk that you're not on the phone!'

The school trip is also with MJ (Performer: Zendaya).

However, what appeared on such a school trip that floats ...

Nick Fury, who has been chasing the field because Spider-Man was not on the phone, saying 'I finally met' (Performer: Samuel L. Jackson)

It is 'Beck' thing Mysterio (star: Jake Gyllenhare) that I met at the destination

'I wanted to fight together in my world,' Misterio makes a meaningful statement.

Mysterio came from a different dimension, saying that the door of another world opened in that battle.

'There are many dimensions?'

'I have something to do,' said Fury asking 'Can we fight together?'

'Aren't there any other candidates?

'What is Captain Marvel?'

So, even during school trips, Spider-Man has taken on the task of protecting the world.

'What are you saying, I went to the universe!'

It is also a scene as if Mysterio, which is supposed to be Villan, will fight with Spider-Man this time.

'It's a sacrifice to save the world'

'I do not want to involve everyone in danger'

In addition, the video work group ' Marvel Cinematic Universe (MCU) ' , which depicts the activities of superheroes appearing in Marvel Comics, was originally considered to be phase 3 up to the Avengers / end game, but producer Kevin Feigi He has declared in April 2019 that MCU's Phase 3 will end with Spider-Man: Far From Home instead of Avengers / End Games.