I have experienced the VR Kit 'Bazooka' which turns the Nintendo Switch into a gun-type VR game machine. 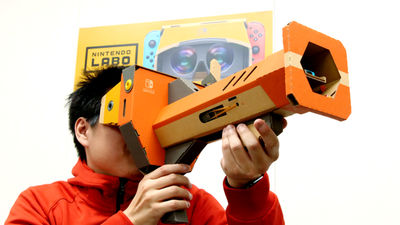 I can play VR games on Nintendo Switch ' Nintendo Labo Toy-Con 04: VR Kit ' (VR Kit) will appear on Friday, April 12, 2019, but I have the opportunity to experience this before it goes on sale Nintendo prepared it. The VR Kit can create five Toy-Cons to be used in combination with VR goggles, but the most actionable VR game is ' Bazooka '.

'Bazooka' is a gun-shaped toy-con based on orange. In the VR Kit, “Toy-Con” is the second largest after “Wind” and you can see from the appearance that it uses a rubber band. Like the pump action shotgun, the fore end at the bottom of the barrel can be slid backwards, and it is difficult to understand, but there is a trigger button at the base of the grip. 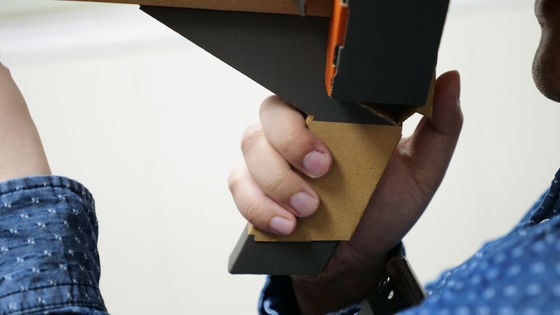 The back is like this. Wear VR goggles in the space where the illustration is drawn. Insert the Joy-Con (L) into the gray vertical case on the side of this space. Joy-Con (R) was designed to be fixed in the barrel. 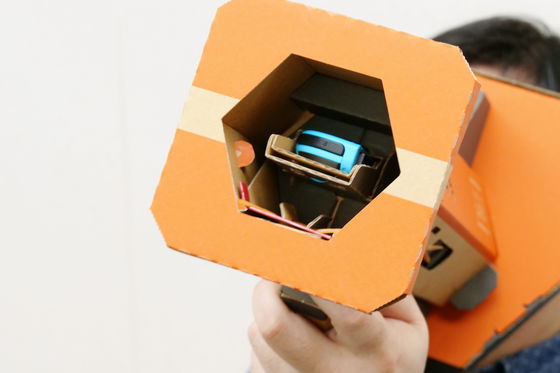 When installing, raise the cover at the top of the space ... 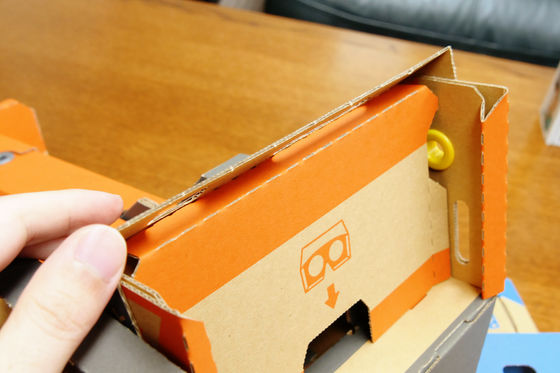 OK by sliding VR goggles. It was very easy to put on and take off, and before play I could not help thinking 'Are you strong with this strength?' There was not. 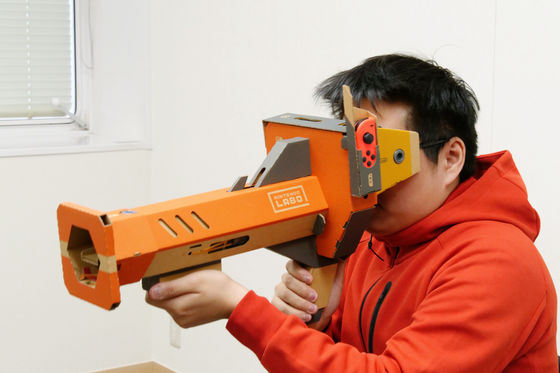 Because there is an operation of falling Joy-Con (L) coming to the left side of VR goggles in the direction of the red arrow. 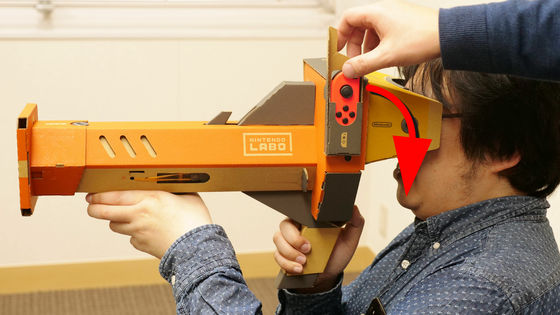 Bazooka Toy-Con can play with two players: 'Bazooka' for one player and 'Kapazoka', a two-player game that competes in score. You can actually play 'Bazooka' and you can see what it looks like in one shot from the following movie. The Bazooka barrel is reflected at the bottom center of the game screen, so the player's attitude in the game matches the real world perfectly. In this way, the more you are involved in the game, the more you feel immersive as if you are operating the bazooka that appears in front of you during the VR game.


The game 'Bazooka' is a game where Bazooka will destroy targets that appear from all directions in 360 degrees. The player moves slowly, so there is little divergence between the real world and the game, and it does not disturb the sense of immersion. Even so, targets to be destroyed will emerge from everywhere ... 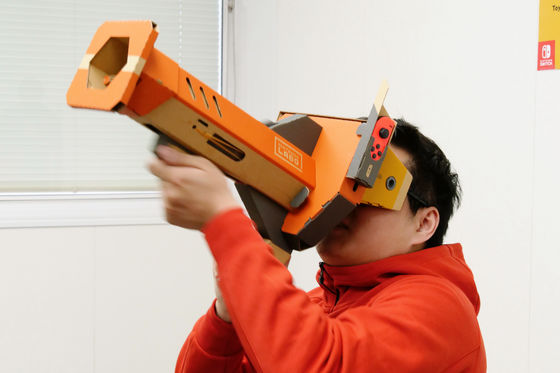 All the GIGAZINE editors who have tried and tried are looking for enemies and Kyoro Kyoro. Among the games that could be tried with VR Kit, it was a game that had to move the view 360 degrees with the best. So, when playing, it may be best to use a swivel chair that can change direction quickly. 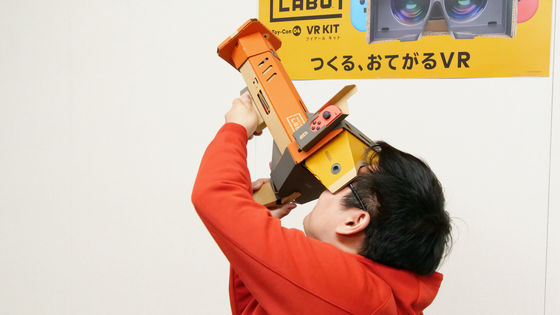 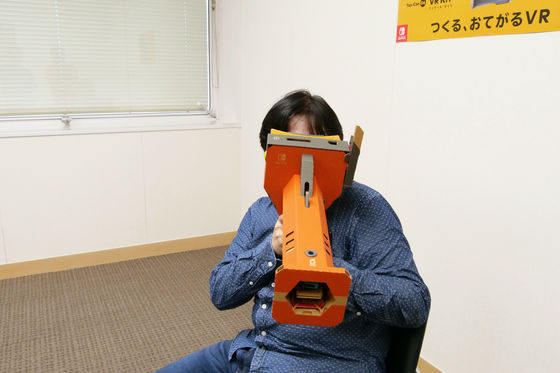 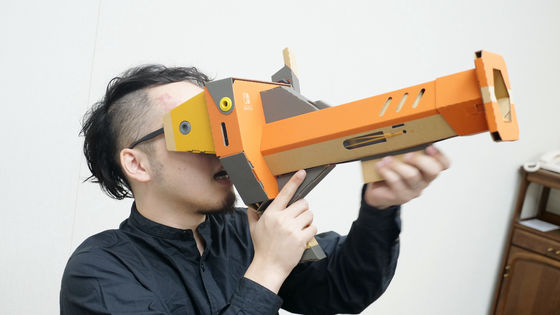 As you slide the fore end back, a click will sound from within the Toy-Con and it will be locked. I felt that 'the feeling of sliding the fore end' and 'the feeling of clicking in a click' greatly contributed to the 'feeling that I was actually handling a gun' during game play. 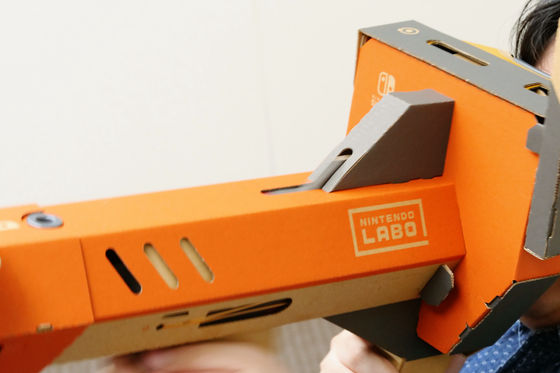 Then, when you press the trigger button, something like the claw in the red frame at the top of the barrel rushes forward. The vibration of “Kon-ku!” When the claw pops out is also linked to the action of firing the bazooka in the game, so you can get an immersive feeling that you can not taste in a normal VR game played by holding the two-handed controller You 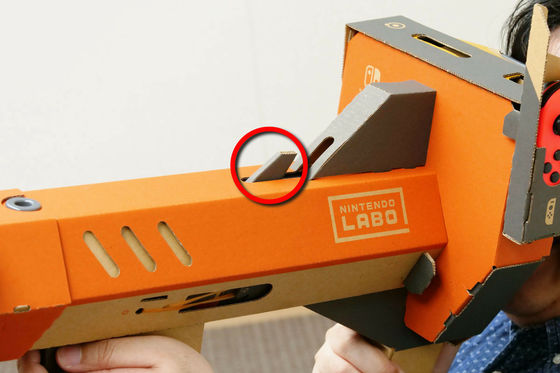 In the VR game, the more the 'characters in the game' and the 'your own movement in the real world', the more the immersiveness is lost. I felt that the game and Toy-Con were cleverly designed to maximize the action without losing immersiveness by allowing them to move freely. Unlike many VR devices, VR Kit has no cords to connect game consoles and goggles, so it does not interfere with play even if you shake the neck vertically and horizontally, so the more you are devoted to the game, the more you play the game You can forget that you are Looking back after being engrossed and playing, the feeling of being based on the skillful calculations from the design of the bazooka to the contents of the game is amazing, 'Why can you bring this quality with cardboard ...?!' I couldn't help but be surprised. Also, because the number of targets appearing is quite large, it may be one of the points that will make you think of 'shooting rather than thinking' as a point of increasing the immersive feeling to the game. In addition, because the target appears from all over the place, looking up and down, the movement becomes more intense than expected, but I still feel that it is an important part that I do not get VR sickness. This seems to be due to the fact that, although there are many stages prepared for Bazooka, the length of one stage is designed to be as short as several minutes. 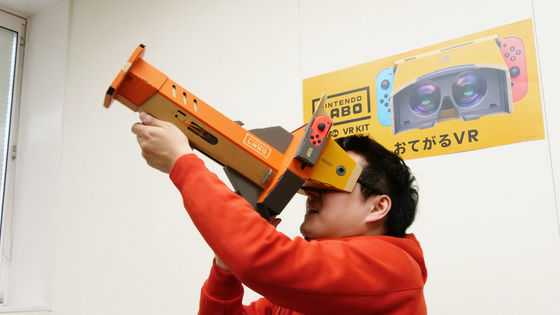