If one day suddenly another person destroys your building with a shovel, will it not be a 'building damage'? 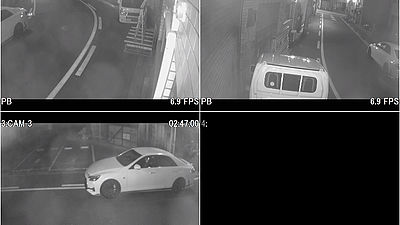 previous from the also new dismantlers different is there is a contact and press the intercom, such as nearby residents, prior notice of 'carry out the demolition work on tomorrow April 1,' it has been carried out, and of It is. The name and contact information of the trader were unknown, so I did not know what to do, so I consulted the Nishiyodogawa police. The other party is the police who accepted this damage report.

If one day suddenly another person destroys your building with a shovel, will it not be a 'building damage'? 01-YouTube


Editor-in-chief: 'I got a phone call from my younger brother and mother in the area just before, and another contractor told me to push the interphone to' do tomorrow's dismantling work 'with the neighbors, etc. What should I do? '
Police: 'Have some more, talk with each other.'
Editor in chief 'I do not know the contact information'
Police 'What number did you teach (= Nisshin Planning Co., Ltd.)?'
Editor-in-chief 'I think it's a different place again'
Police 'Oh ...'
Editor's name 'So it seems to have come to the former head office of the contact or our old head office, so I said that' Kore ', but that kind of thing is not given, so without saying the name, it will not be in haste It's weird. '
Police 'Hmm ...'
Editor's Note 'But if I say that, I don't know if it really comes or not, even if I'm telling people around me it's probably that I'm going to step on the procedural steps of dismantling But that's why so this time, what should I do? '
Police 'I can't do anything with the police either, that's it.'
Editor-in-Chief 'That's right, what about a patrol or something like that in advance? If it's an ordinary company, it's about to be dismantled at around 9:00 in the morning, so I'll just get a patrol?'
Police 'I can not do anything even if I patrol'
Editor-in-Chief 'If there is no way to do it, there is no way to do it once construction starts'
Police 'Because you are a police, can't you say it should stop construction?'
Editor-in-chief 'Because even the police can not stop construction ...?'
Police 'Are there any more contracts, are you talking about civil affairs?'
Editor-in-chief, 'Is it broken by itself?'
Police 'So there is no report of damage already?'
Chief editor 'Yes'
Police: 'After the destruction, you're doing this again with a new contract, maybe.'
Editor-in-chief: 'The other side, is that? Is that another matter?'
Police 'Yes'
Editor-in-Chief 'How do you ... what can I do?
Police 'I can't do anything. I have to ask the trader somehow and I have no choice.'
Editor-in-chief: 'I don't know which supplier ... but how do I find out?'
Police 'No, I do not know it a bit'
Editor-in-chief: 'If I could do it, would it be enough to report to the police as soon as I came to dismantlement and forced destruction to start?'
Police 'Oh, then I'd like you to get 110 at that time'
Editor-in-chief: 'I see.
Police 'There are things that can be done by the police and things that can not be done ......'

In addition, about the fact that the second day Nisshin Planning Co., Ltd. began to 'incorrectly' destroy the GIGAZINE first warehouse, in fact, during the middle of the night before the day, the 'nameplate', 'copy of register', etc. I was able to shoot with a surveillance camera while intruding into 'inside' and taking it out, so I asked about it.

If one day suddenly another person destroys your building with a shovel, will it not be a 'building damage'? 02-YouTube


Editor in chief 'I asked for a message when I called last time, but in a matter taken out in spite of being tied up with a register, a name tag or some other thing, security camera of Kiku Building Materials next to the next Since I was taking a car in the middle of the night and I got into the car in the middle of the night and went into the GIGAZINE 1st storehouse to take care of it, it was recorded in the video properly. What should I do? '
Police 'will not be theft'
Editor-in-chief 'Even if you are inside a building?'
Police 'Oh, I guess there's more to it than that, but it's hard to say it's a little theft, is that?'
Editor-in-Chief 'Is it difficult to say that it is theft if you take away something made here or laminated?'
Police 'Hmm, it's hard to say a little theft.'
Editor-in-chief, 'Are you intruding in a building?'
Police 'Even if you say intrusion, anyone will put in quickly'
Editor-in-Chief 'It's not a break-in because it's easy to put it in. Isn't it stealing even if someone steals someone else's thing?'
Police 'It's a little tough, that's it.'
Editor-in-Chief 'Because you don't have the shape of a house, are you like that?'
Police: 'Everyone can get in and take it there, and there's nothing like excluding it that would block other intrusions, it's kinda tough, that's it.'
Editor-in-chief: '... I see. If you do something about it, put a rope around it, or something like that, do you feel different again?'
Police 'If you do it yourself, you will be told that you will not return again, maybe.'
Editor-in-chief 'I am ... without permission'
Police: 'It is said that you will enter the land, maybe. The land is from the other side of the land.'
Editor in chief 'Oh, I see ...'
Police 'I'm having trouble, please wait a little more.'
Editor-in-Chief 'If you come from the other side, I will keep in mind that I will' 110 '.'
Police 'I wonder if there isn't any more.'
Editor-in-chief 'I understand. Thank you very much.'

The following is a video capture provided by Mr. Kiku Building Materials. 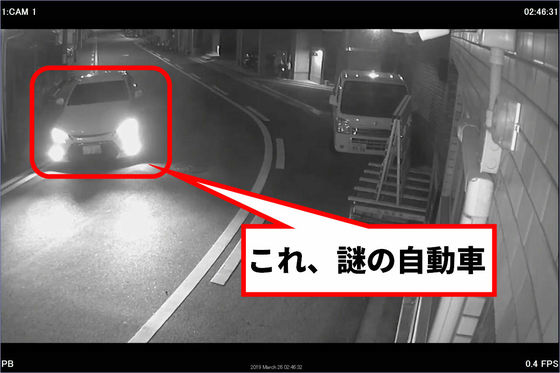 A captured image from another camera. 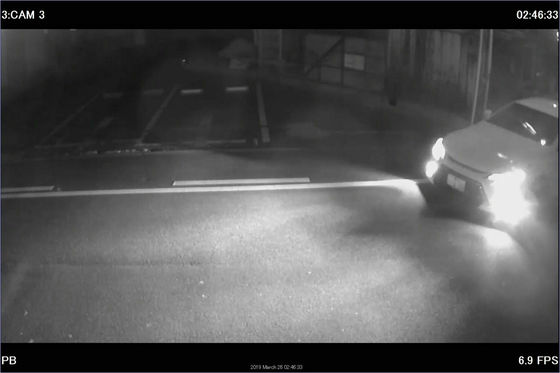 The copy of the register and the nameplate and nameplate were being removed. 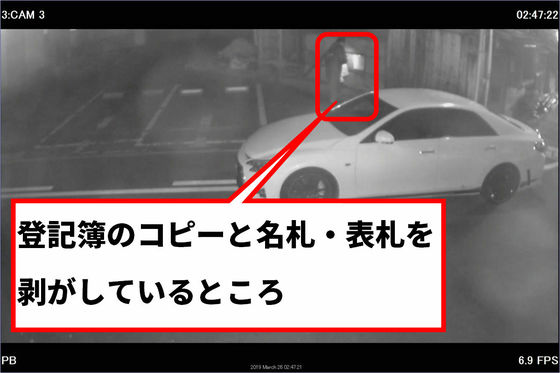 There was also a record of the intruding inside from the front door. 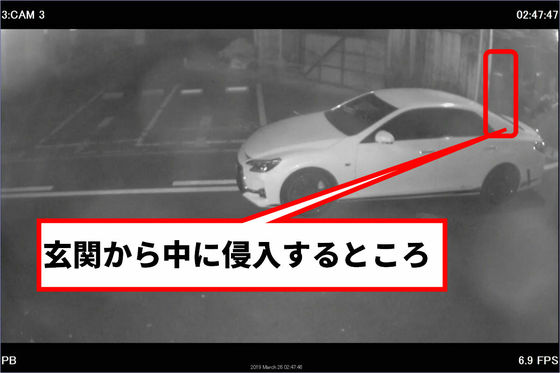 Mr. Kiku Kenzai has provided a good picture of his son, who is a GIGAZINE reader. Thanks for your cooperation. Thank you very much for helping me.

According to Kiku Building Materials, the police usually knows that there is a surveillance camera here, and even with regard to dismantling with a shovel and this theft, 'Why does the police come to know about Koko? I wondered if I would normally come soon? '

Furthermore, in the evening, the secretariat of the Nishiyodogawa leased land tenant union visited for a visit.

・ Even if the landowner claims anything, such destruction can not be tolerated
・ Because it is not a civil matter but a detective as long as the landowner does not take any legal procedures
・ Since there have been no problems with landowners and there has been no prior discussion or communication, the landowner's tactics are vague
・ There was such a trick even in this area in the bubble period of Showa, but I have never heard that such a thing happened in Nishi Yodogawa Ward after the bubble period even after the last 10 years here
・ It is too much a problem that the police is not motivated. Such would be the current criminal arrest. In the end, there is no choice but to move a lawsuit by a lawyer.

is what they said.

However, it is said that 'the 110th to police' is the best way of defense when Power Estate Co., Ltd. and Nisshin Planning Co., Ltd. have come by shoveling vehicles with force.

It's a pity, but I wasn't quite expecting that the next contractor would have been so quick, and that the third destruction was about to begin so soon. A lot of information has not been scrutinized yet, and the resources of the GIGAZINE editorial department are already at the limit.

We would like to ask the GIGAZINE readers who are reading this article to gain time to set up their next preparations (such as live surveillance of live surveillance cameras on YouTube). As it is only good at skimming time, please come in front of GIGAZINE 1st Warehouse ( Owada 4-chome Nishiwakigawa-ku, Osaka 10-City ) and make a commemorative photo before GIGAZINE 1st Warehouse disappears. The nearest station is Hanshin-Senbo Station, which is a 6-minute walk according to Google Map .

Since the GIGAZINE editorial department has already explained the circumstances by the evening to the neighborhood, it is well-known that 'people taking commemorative photographs are allies,' and I can not hold back anything. The only thing you can hit right now is to create a 'general people's view (in a state where many people are looking at you )' other than the 110th call.

Then, if dismantling starts, take a picture of it and immediately escape and move to a safe place, please provide the photographed material to GIGAZINE.

The following official Firefox services can be properly encrypted, up to 1GB without account registration, and up to 2.5GB when registered to a Firefox account.

A file sharing service 'Firefox Send' is released with security, which can share up to 2.5GB of data free of charge-GIGAZINE 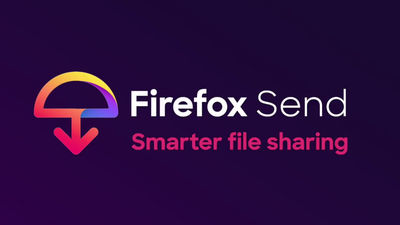 Of course, we have already begun to take various countermeasures sent from readers, but there is still no change in the state of 'If the excavator comes in, we'll take care of it.' The editorial department can not afford to stay up for 24 hours, so some time will come when monitoring becomes loose.

Also, if you live in a distant place, you can not rush immediately, but if you want to cooperate, you can support 825 yen each month if you become a member of the GIGAZINE Secret Club . Separately, offline events for members are also being prepared.

Alternatively, it is effective to purchase the following GIGAZINE e-book on Amazon. All are 'Kindle Unlimited', so if you are a member of the service you can read for free and you can support the operation of GIGAZINE for the pages you have read, and also for the royalty of the author. Become.

Then, please continue to provide information as much as possible and cooperate with the general audience's view in the field. If there are many witnesses, it may be manageable.

・ Continuing
One day suddenly a company that destroys another's building with a shovel without permission is not an 'anti-social force'? -GIGAZINE